The Ride of Her Life: The True Story of a Woman, Her Horse, and Their Last-Chance Journey Across America 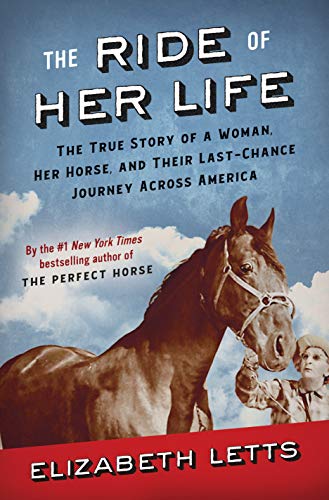 Elizabeth Letts, New York Times bestselling author of The Perfect Horse, has written an adventure inspired by a real person who faces the predicted end of her life with bold audacity, a couple of loyal pets, and a blind faith in human nature. This is a quirky saga of a 63-year-old woman in the 1950s with a medical condition and two to four years to live, who went on an ill-advised, impossible mission on the back of a horse across America during the post war migration that changed the landscape of rural United States to the suburban American Dream.  Her nickname: Jackass Annie. When she begins her journey, Annie Wilkins is the end of her line, the last member of a family of Yankee farmers descended from those who had fought in the American Revolution. She has nothing to lose.

Discouraged, but undaunted by the sale of her farm due to outstanding back taxes, ($54.36) Annie begins her journey from her hometown in Minot, Maine, in the vague direction “towards California”—in November, a year after the first color televisions from RCA Victor are distributed in strategic locations in major cities throughout the United States, one year after the world “suddenly accelerated.”

This “funny, quirky and bold personality,” twice divorced, fond of a good party, a former vaudeville performer and lacking any personal experience with religion, became Widow Wilkins, “folksy, religious and maybe a bit simpleminded.” Just right for white, middle America. She could have been their granny, their long-lost great aunt, and when she paraded into town on the back of her horse, dressed in men’s overalls and preceded by a trotting dog named Depeche Toi (French for “hurry up”), and they opened their arms to her, and their stables to her horse and dog. Sometimes this meant she spends the night in the county jail, and sometimes she’s put up in a bed and breakfast or an extra room, or even a barn. She travels without a map, each day with a different destination “just up the road.”

Early on in her journey, Annie is interviewed by a journalist (Mina Titus Sawyer) who shares Annie’s travel saga to the outside world via the news network, The Associated Press. From town to town as she travels alongside cars zipping past her entourage on the roadside, Annie Wilkins becomes more and more anticipated. She adds to her notoriety by sending postcards to future destinations.

With the assistance of Annie’s journals and newspaper clippings, the reader witnesses these encounters, including meeting Art Linkletter and Groucho Marx. She participates in chance historic events, e.g. in Kansas between Beaver Creek and St. Frances, a road crew has just finished constructing a brand-new segment of four lane highway. Annie becomes the first person to test-drive the highway before its opened.

The story is written with simple, familiar description unadorned by literary pretenses or poetic language; it’s as if the well-researched historical details were so numerous and fascinating that the author had to corral them into standard, expository segments in order to get a grip on the entire picture.

And yet much of the fascination of this story rests in its context—the many details that recreate a changing America in the mid-fifties, hurrying to build interstate highways for the seven-million-plus cars produced in 1950, while supermarkets fill with modern conveniences such as frozen foods, instant Jell-O, and Sylvania light bulbs. Landmark civil legislation: Brown v Board of Education (May 24, 1954), the desegregation of schools and the beginning of the civil rights era are bubbling into existence as Annie navigates through wind, snow, sleet, and heat. Twenty pages of notes and a Bibliography attest to the serious and thorough research by the author who travelled ten thousand miles to research this story, navigating with vintage gas station maps through many of the small towns Annie traipsed with her animals.

What is so appealing about this nutball adventure is that the reader is taken on a trip across the United States, small town by small town, during a radical shift from rural America (where in some locales, horses and buggies are still in use) to the modern automobile-determined landscape.

It is also that Annie begins as Everywoman, riding right into her own destiny, who lives on hope and common sense, who believes in the goodness and generosity of human nature, and most importantly, who never gives up. She embodies what Americans think of themselves when they extend themselves to a stranger; she models what we’d all like to believe we are, especially when faced with old age and sickness and the end of our lives: courageous, resourceful, determined, and optimistic. “Hope is an endless well that never runs dry.”

Dylan Thomas put this universal sentiment into poetry: “Rage, rage against the dying of the light. Do not go gentle into that good night.” Irresistibly, town by town, adventure by adventure, mayor by governor by generous farmer, Annie Wilkins opens our hearts as she puts this determination into motion on the back of a horse.