The Riches of This Land: The Untold, True Story of America's Middle Class 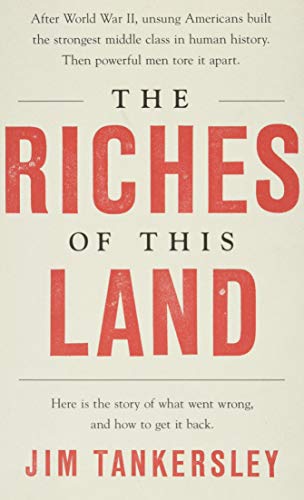 “The book is a lamentation on the fate of the post-World War II American Dream.”

Jim Tankersley is an economics reporter for the New York Times and formally with The Washington Post and other newspapers. His new book, The Riches of This Land: The Untold, True Story of America's Middle Class, is a lamentation on the fate of the post-World War II American Dream.

The book consists of a dozen or so short chapters that read like feature pieces in the Times. At its heart, The Riches of This Land seeks to address two challenging and intertwined questions.  irst, what caused the decimation of the middle-class? And, second, as author writes, “why [have] so many American workers . . . given themselves over to an anger and finger-pointing, to a government-by-grievance mentality . . . ”?  In simplest terms he is asking a profound question: Why did the white middle-class vote for Donald Trump in 2016?

To address these questions each chapter offers insightful and informative profiles of a variety of different individuals who share the fate of the broader middle class. Along the way, the author visits different cities and regions of the country from the early 1940s to recent events as late as 2019. The author uses the narrative of his own life story, one that begins in McMinnville, OR, where he grew up, to anchor the various stories he tells, thus illuminating what happened to the middle class over the last three-quarters of a century.

His analysis of the plight of the middle-class begins with an upbeat reminder of the great post-World War II promise:

“What they’re [middle-class people] aspiring to is security. The ability to own a home and care, save enough to retire, provide for a family, and give any kids they might have (and definitely do not get to sell) the opportunity and resources to enjoy a life at least as successful as their own—and hopefully a better one.”

Tankersley calls this the ode of the so-called “Golden Era” of the postwar economic boom—what others refer to as the “American Dream.”

The author’s informative study begins in the pre-WW II era with telling profiles of an African American women who worked at a Winston-Salem cigarette packing factory who led a strike and a white man who worked for a military aircraft manufacturer in Downey, CA, outside Los Angeles, that build the Apollo space craft. Their lives illuminate the early steps leading to postwar economic boom, an era marked by the lowering of barriers for women of all races and non-white men to enter the middle-class—and do so without a college education or formal training.

Tankersley, following the thinking of many leading economists and policy analysts, argues that the “Golden Era”—especially for white male workers—petered out during the early- to mid-1970s. He describes how the great boom faded into decades of stagnation and frustration for these workers.

The author argues, “Nearly every serious study, regardless of methodology, confirms a devastating story about the middle class since the 1970s.” “Which is to say, they all show the American economy delivering far less for middle-class workers than it used to, and far less than those workers had grown to expect in the years after World War II.”

Going further, Tankersley suggests that the overall health of the American economy, especially postwar prosperity and social progress, is intimately tied to the economic fortunes of women, Black Americans, and immigrants. He argues that too many academic and policy studies tend to ignore the racial and gender diversity of America’s middle class. Rather, they overemphasize the fate of white male workers .

Tankersley points the figure at those responsible for the eclipse of the middle class to “the group that has long set the rules of the economy and has used those rules to divert prosperity for its own gain.” Who are they? “In overly broad terms, we call this group ‘elite white men with college degrees.’”

Tankersley is a New York Times reporter and The Riches of This Land is infused with the same liberal—dare one say “progressive”—social criticism and policy suggestions often found on the paper’s Op-Ed page. Thus, terms like “capitalism,” “the ruling class,” or “the 1 percent” don’t appear.

Taking on the tone of a liberal preacher, he declares: “Elite whites should acknowledge that they have benefited disproportionately from the economic changes of the last forty years, on top of the ingrained advantages that elite white men have enjoyed for centuries.”

He adds, “If they are interested in helping lift others up to enjoy similar advantages in order to optimize the performance of the economy and keep delivering gains for people like them, they should be willing to pay higher taxes, to fund investments in human-capital accumulation for everyone else.”

In this spirit, Tankersley lays out a host of policy suggestions that, he believes, could help redress the growing inequality resulting from the eclipse of the middle class. He calls for economic and social programs that could provide new opportunities for those excluded from the middle class, including men and women, immigrant or native-born, regardless of race.

The author is especially critical of the nation’s unfair tax policies for being nothing more a reinforcement of the very structural inequality that’s eroded the middle class. He champions major changes in the tax code, calling for a financial transactions tax and a carbon tax as well as the equalizing the tax paid by labor and capital income. “A lot of liberals say we should tax high earners significantly more and use the proceeds to invest in poor and middle-class Americans through direct transfers of income or expanded benefits like free college,” he writes.

Tankersley is a well-intentioned liberal who provides a telling—if sad, painful—account of the erosion of the post-WW II American Dream. In the end, he sees the real solution for this suffering has more to do changes in cultural values than economic policy, more to do with changing hearts and minds than government programs.

“The big change we need is attitudinal,” he declares. “We need a national commitment to helping each other succeed and get ahead. We need to stop ourselves and others from discriminating by race and gender. To stop vilifying the people who don’t look like we do.”

While a noble sentiment, one can only wonder if such a wish is sufficient to addresses the deepening economic and social crisis gripping the nation.