The Rich and the Dead: A Novel 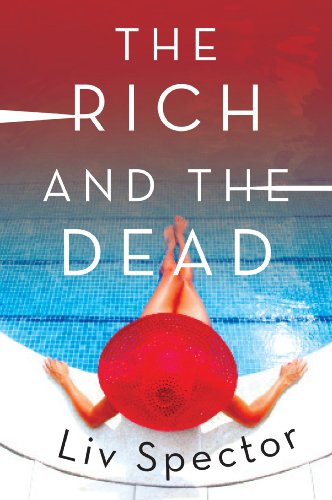 “The Rich and the Dead is a fine-tuned, fast-paced thriller by a new name in the game. . . . Totally absorbing.”

The year is 2018 and ex-cop turned security guard Lila Day is doing her rounds at the Hotel Armadale when she hears yelling coming from room 3746. Normally, the most she has had to contend with is watching out for guests smoking in the stairway and other mundane activities. Tonight, however, that is all about to change—drastically and with far reaching consequences.

Upon rapping the door, all goes silent. Instinctively, her hand reaches for her gun as she enters the room. Unfortunately, she is no longer a cop, and all that she can come up with is her designated flashlight. The room resembles a war zone. Undeterred, she starts searching the place, when suddenly she hears a noise coming from the vicinity of the bedroom. A trail of blood on a white carpet leads all the way to the bathroom door where she can hear the sound of rushing water and heavy footfalls.

Her verbal commands to open the door are ignored by those inside, so she slams the butt end of her flashlight repeatedly against the doorknob until the metal rips. Seconds later, she is using all 125 pounds of her body weight to charge against the door.

Once inside, she is confronted by two men covered in blood and stripped to their underwear, standing motionless inside a Jacuzzi. A woman’s bare legs hang limply over the Jacuzzi’s side.

Within seconds a fight ensues as one of the men grabs Lila. Thankfully, her police training comes to the rescue as she smashes the cheek of one of the attackers and crunches the ankle of the other, forcing them to flee like frighten, wounded rats.

Lila then calls 911 and does her best to save the woman. When her boss, Danny Ramirez, eventually calls her to his office, it’s not to be praised for trying to save the woman, but to be reprimanded for assaulting two guests and bringing hotel policy into disrepute. Ramirez quickly informs her she is no longer needed at the hotel and to pack her stuff and get out.

Outside the hotel, as she walks toward her car in the parking lot, Lila spots a stranger in a Bentley limousine pointing a long-lens camera seemingly in her direction. Within seconds, the car is gone, leaving Lila to question if it had ever been there in the first place or if it was just her shredded nerves after a such a stressful, violent day.

Shortly afterward, the driver of the Bentley calls at Lila’s apartment, introducing himself as Conrad Whittington, an employee of tech billionaire Teddy Hawkins. Whittington hands Lila a videophone, and within seconds she is looking at the face of the man she interviewed several years ago in connection with the infamous and unsolved Star Island murder case. . . .

On New Year’s Day 2014, 12 powerful and extremely wealthy people were discovered murdered—assassinated—in an opulent Star Island mansion. Each of the victims had a single bullet wound to the head. Puzzlingly, the killings seemed to be have been carried out by a lone gunman.

Prior to the slaughter, as a detective Lila could do no wrong, solving crime after crime with her innate ability to hunt down criminals like a relentless bloodhound. With her stellar reputation bordering on legendary, she was given the role of lead investigator into this world-headlining case.

Yet things did not go according to plan, and she soon found herself hitting wall after wall, with few or no clues found. To make matters worse, the killer was never found, and her fall from grace was as fast as her rise to the top. Eventually forced out of the police force, she was left with little choice but to eke out a living in low-paying jobs in dodgy neighborhoods.

Now Teddy Hawkins has come to her rescue—or so he claims—by offering Lila a chance to rectify everything by not only solving the crime, but also possibly bringing the killer to justice. His solution? To send Lila back to 2013 and stop the killer from carrying out the murders.

Reluctantly agreeing, the skeptical Lila goes back, given the secret identity of newly divorced and wealthy socialite, Camilla Dayton. Hawkins has warned Lila not to try to save anyone from being murdered, just gather information on the killer, to which she agrees. But that was before she meets the mysterious Dylan Rhodes, a man about to change her life more than Hawkins ever could.

Original, refreshing, and intelligent, The Rich and the Dead is a fine-tuned, fast-paced thriller by a new name in the game. Be careful taking this début book with you on the train. You just might miss your stop. Totally absorbing.