Rewire: Digital Cosmopolitans in the Age of Connection 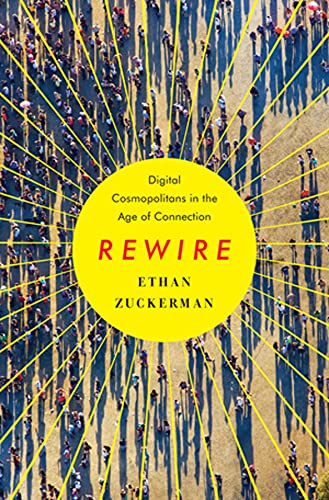 “It's becoming increasingly difficult for anyone to see the world as it truly is.”

Rewire is not a comfortable read. That should please author Ethan Zuckerman who says that exposure to new experiences is often unpleasant but almost always rewarding.

Zuckerman is co-founder of Global Voices, an online community devoted to making news from one culture available to people in other cultures. Every day, thousands of news articles and blog posts are translated by the "cosmopolitans" at Global Voices into dozens of other languages. The goal is to enable exposure to what is happening in the world beyond our narrow personal boundaries. Those boundaries are much more constricted than you might believe.

Zuckerman uses the example of Fiji water to illustrate this point. While many people have sipped the bottled water named for the island nation, few are aware of the military coup that occurred there in 2006. Most foreign journalists were expelled after the takeover. Those that remain are required to write "the journalism of hope"—only positive stories about what is happening in Fiji are allowed to be reported there.

The result is that it's easier to get water from Fiji than news.

Zuckerman provides a bracing analysis suggesting that the Internet, instead of making news more readily available around the world, could in fact be choking it off. With media outlets laying off journalists by the dozen, we rely increasingly on citizen reports to keep us informed.

The first problem is that many citizens are not allowed to report. The second problem is that we now access the Internet through filtered sites, such as Facebook, where the news we receive is censored by our preferences. In the first case, we see only the world we are allowed to see; in the second case, we see only the world we want to see. It's becoming increasingly difficult for anyone to see the world as it truly is.

"A central paradox of this connected age is that while it is easier than ever to share information and perspectives from different parts of the world, we may now encounter a narrower picture of the world than in less connected days."

Zuckerman, a self-confessed news junkie who works for the Massachusetts Institute of Technology's Civic Media Center, has made a detailed examination of the amount of international coverage in television newscasts.

Today, TV news in the United States has less than half the number of minutes devoted to international reporting than in the 1970s. Zuckerman cites one estimate that foreign news has gone from 45% of TV newscasts in the '70s to less than 10% today. Clearly, just because there is technology that allows cross-cultural information sharing doesn't mean it happens.

Zuckerman looks at the way we get our news, and what he finds is not encouraging. The world of personalization and customization results in us only seeing news our friends think is important, or news that publishers believe we will be most interested in, such as local news and weather. Increasingly, international news is not being reported and is blocked when it is.

The results can be devastating, such as the U.S. getting caught off guard by the Tunisian revolution—the beginning of the Arab Spring.

Zuckerman illustrates the problems with this surprisingly constricted view of the world using music. Much of the most interesting music being made today comes from musicians in one country incorporating sounds from other countries. As an example, Zuckerman cites Paul Simon's blockbuster Graceland album. While Simon bent over backward to respect the African musicians and composers who helped create Graceland, he still weathered controversy that the recording was an exploitation of African music. Such is the fate of those "bridge figures" who act as guides between two cultures.

Our provincialism is apparent even on the World Wide Web, which is not as wide as you might think. The news sites we gravitate to online, the stories we choose to read, are even more narrow than those we are exposed to through print and broadcast media. Essentially, we don't see anything we're not interested in. The author uses tools to track his own use of the Internet, and finds that he spends a shocking amount of time catching up on the Green Bay Packers.

In the final section of the book, Zuckerman explains some of the benefits of globalization and cosmopolitanism. Both Coca Cola and Pepsi have foreign-born CEOs. This isn't an accident; it's a way of finding leadership who can bridge not only cultures, but also markets. "The connected shall inherit the Earth," writes Zuckerman, then backing it up by explaining why xenophiles (those who love the unfamiliar) fare better than xenophobes (those who fear the unfamiliar).

Studies on the effectiveness of teams have shown that groups of people are more successful when they include a wide cross-section of opinions. For example, medical professionals are less effective predicting the spread of disease than randomly chosen groups that include both professionals and laypersons. The interesting downside of diverse groups is that they experience more conflict and discomfort, even as they produce better results. We don't like being forced to consider diverse opinions, but we almost always benefit when we do.

Zuckerman ends the book with suggestions for improving the cosmopolitan quotient to our lives. For nations, he recommends better airports and roads to make it easier for strangers to travel, along with immigration reform to make it easier for them to stay. For companies, he suggests cultivating "bridge figures" who straddle more than one culture. For individuals, he suggests monitoring your media consumption so you can better see your prejudices—and seeking out cultural curators to help you overcome them.

Rewire will go down with Howard Rheingold's The Virtual Community and Thomas L. Friedman's The World Is Flat as one of our most important books on globalization. We should be glad that an incredibly successful bridge figure like Zuckerman has pointed the way for the rest of us. The growth of cosmopolitanism will lead to an increase in the health and welfare of the planet.

That's worth having to endure a little extra news about how the rest of the world thinks.