The Revenge of the Radioactive Lady 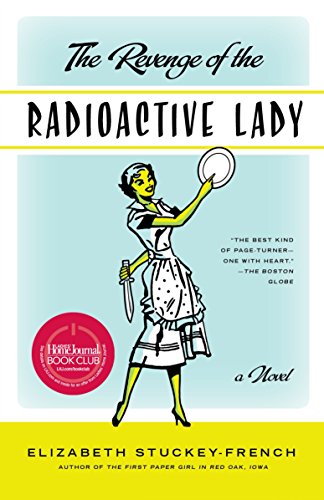 It has been said that before going out for a night on the town a lady would do well to take a moment, study herself in the gilded mirror in the foyer, and remove one item of ornamentation—a piece of jewelry, her tiara perhaps, or her false eyelashes.

In the same way, it would often do an author quite well to consider the manuscript as a whole and, in considering it, focus it by removing all extraneous subplots, locales, and supporting characters. This is especially helpful for younger writers and for those who are not, as yet, in full control of their voice.

It would, for instance have stood Elizabeth Stuckey-French to great advantage to have reconsidered the importance of all the topics that she chose to squeeze into her slim novel, The Revenge of the Radioactive Lady. With at title that is both clever and evocative enough, she gives us a novel that is front-loaded with content. We get children with Asperger’s, seniors with Alzheimer’s, missing mothers, dead children, secret government experiments, teenagers with nuclear dreams, broken marriages, philandering husbands, secret identities, rebellious teens, sex addicts, statutory rape, murder in the first, and murder in the third, mega-churches, Leave No Child Behind, Elvis Presley, “America’s Next Top Model,” and the most overwrought hurricane scene since Key Largo. In other words, we get everything but the kitchen sink.

Perhaps, the reader thinks while reading, if we could have skipped a few errant plot threads, focused things up a bit more, we could have ended up with a better book as a result?

The Revenge of the Radioactive Lady starts out well enough, with Marylou Ahearn moving to a small ranch house in Tallahassee in order to live near to a retired doctor, Wilson Spriggs, who lives with his daughter and her family in a Florida subdivision in which all the streets are named for characters and places in Chaucer’s Canterbury Tales. This somewhat precious detail (we get Prioress Path, Knight’s Way, and Merchant’s Lane as street names) aside, the reader is initially intrigued with the revenge fantasy of the central plot.

Marylou, you see, was once, without her knowledge or permission, part of a secret government program. One in which, during her single pregnancy back in the ’50s, she was given a radioactive cocktail to drink so that the government could, during its nuclear testing, also test the effects of radioactivity on human beings. Marylou was told by her doctor, one Wilson Spriggs, that she was being given simple vitamin supplements instead.

Or for the fact that she had become the Radioactive Lady.

Years later, the Clinton administration makes reparations to those unwittingly involved in the medical trials and, in doing so, gives Marylou the financial resources she needs in order to seek justice.

Which brings us to Tallahassee in 2006, when Marylou has finally, doggedly located the man who cost her the life of her only child and has moved close enough to him that she can walk over and watch him tend his garden while she plans the modus operandi of her revenge.

Echoing Myra Breckenridge, Marylou takes her inspiration from some of Hollywood’s weakest products, most notably from Attack of the 50 Foot Woman, from which Marylou takes her disdainful facial expression, her female revenge fantasy and her name—in seeking a new identity, she assumes the name of the fifty foot woman herself, Nancy Archer.

But soon new identities and revenge fantasies are not enough.

As author Elizabeth Stuckey-French puts it, “The whole being-in-limbo thing, the looking-to-get-even thing, was getting old. She was growing weary of wanting to kill Wilson, of imagining herself killing him; she was itchy to actually do it.”

Thus the nearly 80-year-old woman sets out to kill the nearly 90-year-old man in what might have been a wonderful, deep, and richly dark comic novel—had the plot been placed in more skillful hands.

Instead, The Revenge of the Radioactive Lady soon collapses in on itself under the weight of all the accumulated subplots.

Like that rarest of things in Tallahassee, a snowball rolling downhill (given the shortage that Florida has of both snow and hills), each new wrinkle in the plan, each new subplot and new character from central casting (angry goth girl, minister with a plastic grin and a sexual secret, skeevy photographer who preys upon innocent young girls) only assists the narrative in gaining momentum and girth, until, like that hurricane that was promised us since the early pages of the novel and arrives just in time for what passes for a climax, it threatens to engulf everything in its path—reader included.

In the hands of author Stuckey-French, the Radioactive Lady allows character to be reduced to characterization, and tragedy to melodrama. And in electing to have each chapter narrated round-robin by an individual character (a rather tired shifting POV innovation in modern literature that is rather akin to television’s use of the shaky, hand-held camera in an attempt to achieve “reality”) the author displays a variance in her character’s cadence, viewpoint and vocabulary so slight (everyone in the book speaks with the syntax typical of a young adult novel) that the reader had to keep looking back to be sure who was speaking.

Along the way, as the narrative swoops and dips and swells until it threatens at last to kill us all, plots are dangled and dropped—will the increasingly radioactive science project in the shed explode and wipe Tallahassee off the map, will the incredibly dull Vic have an affair with Gigi, will the ridiculously named Reverend Buffington Coffey get what’s coming to him—until the reader assumes that, like all the flotsam and jetsam bobbing in the wake of the novel’s mythical hurricane named Grayson, it will all just finally float out to sea.

Then comes Chapter 24, the Final Chapter. And, in it, the reader realizes that the author had not forgotten about that kitchen sink after all. Because she finally throws it in.

In trying to tie up all the loose ends and plot fragments that she dropped along the way in the few pages left before the reader throws the book out the window, Stuckey-French creates a final chapter that reads for, all the world, like the final episode of an episodic television series that was cancelled mid-season.

With the frantic pacing of a French farce, characters slam doors, drive through hurricane Grayson, rush to Memphis, throw house sitters out, eat barbeque, and then, having nowhere else to run, just sit quite leisurely on the couch, filling each other in things that happened while they were all running about.

Things like: “Oh, by the way, I just got a call on my cell. The man who has been chasing us all is dead. We can go home.” or “I just got a call as well. Turns out we’ve struck oil!” or “Remember our dog Goober? Dead, quite dead.”

Not that any of these are indicative of the true ending of the novel. That is for readers to discover. But along the way, sadly, those same readers are likely to discover what this reader did—that the Radioactive Lady is indeed an anemic and sickly little thing.