Revenge of the Dinotrux 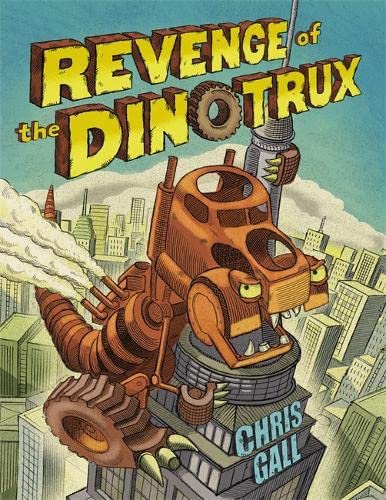 “a superb combination of many boys’ (and girls’, too) favorite topics—vehicles and dinosaurs—and lots of adventure.”

THE DINOTRUX ARE BACK . . . AND LOOKING FOR A SNACK!

Millions of years ago, Dinotruxes ruled the earth. But today, people rule them! Their rusty fossils have spent decades stuck in a drafty museum surrounded by screaming kids wanting to see how they used to move. They were tired of having to be charged and prodded to know end. Having had enough, they break out and let off some really old steam.

Garbageadon eats cars, Craneosaurus peeks in windows, and Tyrannosaurus Trux climbs a skyscraper. . . . Who will win the mighty standoff between man and prehistoric beast?

Dinotrux is a collaboration of the super beasts like King Kong and Godzilla, mixed with children’s favorite vehicles and a dash of dinosaurs. This mixture makes for great fun and hilarious mishaps.

The dinotrux are tired of being pent up into a museum and need freedom, and when they get it they cause more harm than good. But only when children decide to step in, teaching these dinotruxes some very important lessons, do we begin to understand the big picture here.

This 32-page beautifully illustrated picture book is a superb combination between many boys’ (and girls’, too) favorite topics—vehicles and dinosaurs—and lots of adventure. Children will love this next book in the Dinotrux series.