The Return of the Zombies! 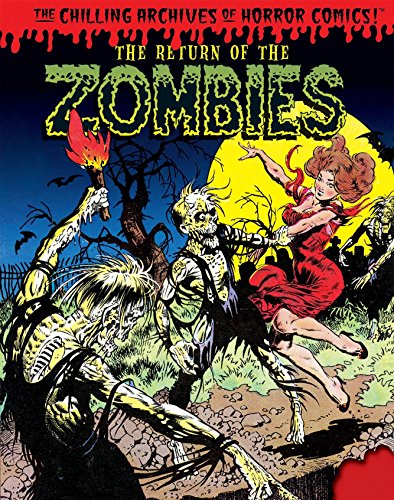 In a day and age when the #1 selling comic books series is The Walking Dead, it's hard to imagine there was a time when even mentioning the word "zombie" in a comic book was strictly forbidden. But there was. When the Comics Code Authority was formed due to a fraudulent study, and subsequent bestselling book, written by a man named Frederic Wertham, there were several subjects that were instantly banned from comic books. One of those subjects was zombies.

No longer could lurid images of the undead, the walking dead, animated corpses, or anything resembling a zombie be allowed to warp the minds of the young. Decades later it would be discovered that Wertham's study was a complete fabrication and his "subjects" turned out to be a single young man with severe mental health issues, none of them related to comic books in anyway—but the damage was already done.

An entire generation of comic book readers would be deprived the pleasure of gawking at walking corpses terrifying scantily clad women or bringing to justice unscrupulous men.

IDW, in collaboration with Yoe Books, has been busy reprinting many of the pre-Code comics that used to fly off newsstand shelves. They started with the first collection, Zombies!, and that proved so popular that they are at it again with The Return of the Zombies. This collection brings together takes like “An Army of Walking Dead”, “The Zombie Disciple”, “The Fleshless Ones”, “Dial C for Corpse”! If you dare devour, “The Corpse That Prowled by Night”, “The Dead are Never Lonely”, “Born in the Grave”, and “Zombie Vengeance” for fans of the old pulps to enjoy.

The quality of the stories varies, as do the protagonists, from cliched revenge tale to even a superhero story at the very end. At one time zombies were the hottest thing in horror comics and the publishers couldn't print enough. They managed to fit in a zombie into almost all the various titles being published. Then the Code hit and the undead mine was shut down.

It wouldn't be until companies like Marvel and DC became big enough to start ignoring the Code without fearing financial repercussions that horror comics would stage a comeback, but the damage was done and it was another 40 years before The Walking Dead would return the zombie genre to life.

For fans of the great pre-Code horror comics, The Return of the Zombies is a must have. It fills out not just a niche in the collection, but also paints a picture of the hold zombies used to have on our culture even before George Romero would bring them to the big screen in the late sixties.