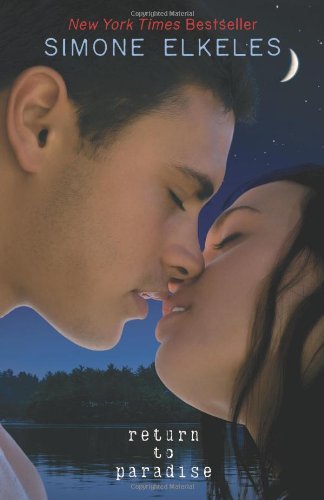 Return to Paradise is the sequel to Leaving Paradise by Simone Elkeles, the New York Times bestselling author of Rules of Attraction and the breakout novel Perfect Chemistry. This reader read the first book in the series and looked forward to the sequel. It did not disappoint.

It is highly recommended that Leaving Paradise and Return to Paradise be read in chronological order, respectively, to get the full impact of the story arc. Regardless, they are both standalone novels, complete unto themselves.

Unexpected circumstances have brought Caleb Becker and Maggie Armstrong, both seventeen, together in ways that are both awful and awesome. A tragic accident, time spent in juvenile detention, and a permanent disability are just some of the things this young couple contend with. The truth of what really happened the night Maggie was maimed is at the core of both books.

Return to Paradise finds Maggie and Caleb trying to move on with their lives. Maggie has fought through pain and therapy. Caleb has struggled with time in jail and hits to his reputation. He was convicted as the perpetrator in the accident that leaves Maggie disabled.

Against the odds and in spite of their designated rolls as victim and perpetrator, they fall for each other and try their best to let love be enough, to let it be the glue that holds them together, but as is often the case, love is not enough. Both Maggie and Caleb have work to do to learn who they are as individuals and as a couple.
They have gone their separate ways expecting never to see each other again, but then they do. The issues looming before them are deep and entrenched. Whether they can ever put the pain, lies, and tragedies behind them and move on together, as a couple, is the question.

Simone Elkeles has a tremendous ability to capture a true-to-life teen voice and convey the depth of feeling, in all its highs and lows, that teenagers experience. Return to Paradise is a relatively short book at 285 pages, but Ms. Elkeles manages to pack a dynamic and intense story within those pages. The characters are fully developed and fleshed out. The interactions are all real and believable. Caleb and Maggie, their families with their problems and flaws, are created in a way to make them highy relatable to teens.

There is a fair amount of profanity as expressed by Caleb, but it is not gratuitous and makes sense in the context of the story; it is organic to his character.

Simone Elkeles had forged a path and established herself as a force within contemporary young adult fiction. Impatiently awaiting her next literary endeavor.