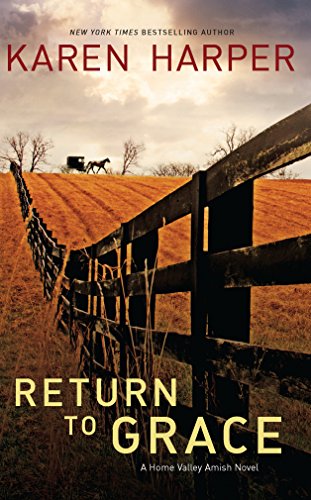 “The closed Amish community is shown in all their glory—from buggies that remind us that perhaps the journey is as important as the destination to a wedding with 400 chickens to cook.”

Hannah Esh left her Amish community in Home Valley for two reasons: her beau Seth Lantz married another girl who was pregnant with his child, and Hannah wants to test the waters with her singing voice—perhaps she can establish a career with it.

Her friends in the outside world are Goths, and they have planned to spend Halloween in a graveyard: Hannah’s Amish graveyard. Things go horribly wrong when someone shoots at them killing one, and wounding two, including Hannah.

As Hannah recuperates at her family’s farm, she struggles with where she belongs—with the Plain People or out in the world? Her efforts are not made any easier when it’s clear Seth (now a widower with a child) still has feeling for her. But the FBI agent who’s sent to investigate the crime clearly thinks she’s beautiful, smart, and talented.

This is the second in the Home Valley series, and it mimics the first book in plot, character, and setting: Amish girl in Home Valley helps investigator in solving crime, and he falls in love with her. If you liked the first, you’ll love this. If you are hoping for more of a variation, well, maybe book three?

This is more a romance than a mystery; it is clear Hannah’s future lies with marriage. It’s simply a question of which man to choose. That’s too bad because there’s a lot to like about Hannah as a single, feisty character. She’s observant, intuitive, and clever. The series of betrayals (and one she learns about while at home is a whopper) makes her sympathetic and easy to root for.

The secondary characters carry the plot of small town life with ease, from the ex-army gun shop owner to the restaurateur who has whoopee pies of all kinds. If you are new to the concept of whoopee pies, prepare your oven for this interesting confection.

The closed Amish community is shown in all their glory—from buggies that remind us that perhaps the journey is as important as the destination to a wedding with 400 chickens to cook.

Could you give up an iPhone for a lifetime of whoopee pies?