The Resurrection of Fulgencio Ramirez: A Novel 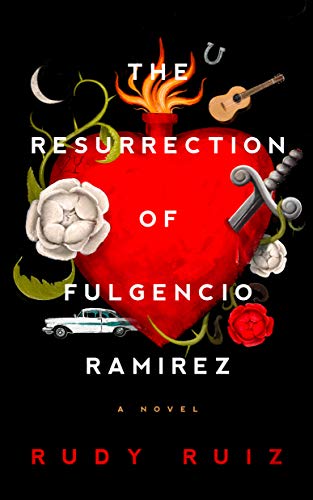 1986. Fulgencio Ramirez, a pharmacist in a border town called La Frontera, reads the obit section every morning, waiting for a man to die so he can move in and scoop up his wife. This day, the name jumps out at him: Miguel Rodriguez Esparza, dead at age 55. At last, his chance to reinvent himself and to conquer the maladicion: a mysterious force that has haunted Fulgencio, somehow causing the demise of his perfect relationship.

So the questions begin: Who is Fulgencio? Who is the woman of his lifelong wishing and hoping? And what was their story? Chapter Two: The unpredictable but cliched 1950s romance unfolds beginning through alternating chapters from “the present” when a rejuvenated Fulgencio makes his moves to win back his only true love—back to the fifties when they were young, met, and fell in hopeless love.

Little by little the details of a remarkable young man emerge: a Mexican teen on the wrong side of the tracks falls for an unattainable blonde beauty. In his pursuit of this impossible dream, Fulgencio uses his amazing, beautiful voice, a bushel of charm, an unbeatable physical strength, a stellar work ethic and a determination that literally makes everyone love and respect him. For some unknowable magical realism reason, he has the counsel of friends who have lived their lives and are now ghosts but who appear at the pharmacy and smoke their cigarettes, sip their drinks, and give Fulgencio advice.

The object of Fulgencio’s obsession is an unattainable beauty, a Juliet to his Romeo, belonging to an elite class, La Frontera’s wealthy Anglo ranchers and merchants from across the river. Her name is Carolina Mendelssohn, and she’s the daughter of the town’s pharmacist. It’s instant infatuation when he spies her in pink in the prime of her youth, and he doesn’t waste any time getting in the good graces of her father, Arthur Mendelssohn, so he can be near Carolina and get her attention.  As he works for the pharmacist, Fulgencio impresses Mr. Mendelssohn with his schemes and hard work. He decides to follow in Mendelssohn’s footsteps and become a pharmacist, so he can provide for Carolina in the manner to which she has become accustomed. He never swerves from his determination to marry her.

Fulgencio comes from a violent home with an alcoholic, abusive father and brothers “who never amounted to anything.” Somehow, Fulgencio amounts to more than one person could expect of himself and excels at every intention; he’s creative and hard-working, an amazing football player, and an excellent short order cook, and little by little he captures the affection of Carolina.

Thereafter, until we are able to answer What happened? How and why did Carolina marry another man? the portrait of the couple is etched in perfect detail: from his dashing outfit on prom night to her delicate beauty, the smell of her, her golden curls . . . It’s all so predictable and glowing, the repeat of every romantic story about a charismatic man determined to have a beautiful woman, that any description of their relationship becomes skimmable reading.

Most of the book is spent during the years of his separation, but it’s a quirky, colorful story with lots of episodes—about Fulgencio, the curse that he inherits from an ancestor, and what a super man he is as he tries to overcome this stumbling block to happiness.

The story is full of rich detail—before and after scenes: the dusty town in the fifties and in 1986—now that “progress” created shadows out of high rises, and the land—El Dos de Copas (Two of Cups, the lowest playing card in the Spanish deck) land that Fulgencio inherits when his grandfather dies. Religion and language intertwine and songs written in Spanish are translated line for line, in a gesture that seems innocent and passionate at the same time and adds considerably to the charm of this novel. The forward motion of this young man as he is determined to overcome his own racial disadvantages and the maladicion in pursuit of his true love keep the narrative chugging along.

The delight in this story is the frequent and passionate sharing of the Spanish language (sometimes translated, always in italics), Fulgencio’s steadfast determination and the special quality of success and brilliance that he attracts to himself. The predictable descriptions of the couple’s happiness, the reassurance of magical realism that favors Fulgencio and his crusade. Although many characters die, they don’t all stay dead. Ruiz creates a surreal world with death and not-death that allows all the friends Fulgencio meets in his adventures to live beyond their demise—and cross back over the line just to hold court with him. The Resurrection of Fulgencio Ramirez is ultimately a party of all these characters, endlessly recounting the unbelievable adventures of their hero.