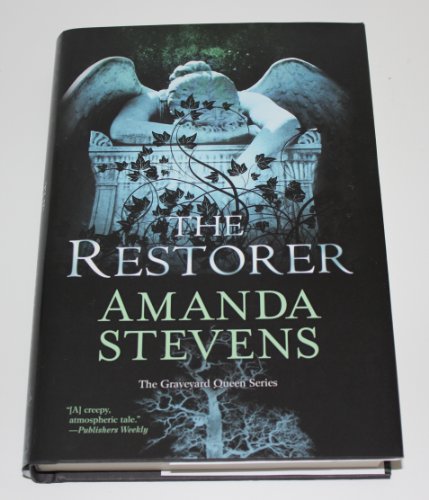 The Restorer is a near-perfect first book in a series. It hooks the reader right from the first line: “I was nine when I saw my first ghost.” From there, protagonist and point of view character, Amelia Gray, tells us how it happened, who her parents were, what her life has been like, and what the rules are that she has to live by.

She paints a picture of a quiet, secluded, literally haunted childhood full of secrets—and then immediately dives into the meat of the plot. A body has been found in the cemetery she’s been hired to restore—and it’s not one of the bodies meant to be there.

Amelia is reserved, self-contained from a lifetime of not being able to show that she sees ghosts (acknowledging them lets them latch onto your life-force, and once they have, you’re haunted for life—until they drain it out of you). She enjoys her solitude and the peace of restoring the south’s beautiful but neglected old graveyards. This murder victim pulls her into a plot that’s thrillingly dangerous, always unexpected, and twisty enough that the end is surprising and satisfying.

She’s the only one who can decode the killer’s graveyard-symbolism clues, and this means she’s needed by Detective Devlin, the dark, fierce, rather broken, and dangerously haunted male lead. She knows things about the location that he doesn’t, and as they work together, she grows more and more attracted to him while he fights an equally strong attraction to her. Sparks fly in both directions and boil over in a wonderfully steamy scene that abruptly turns creepy, in perfect keeping with the theme of the book.

This is Paranormal Romance done well: Amelia is self-sufficient without being a man-hater. She’s intelligent without being brassy. Devlin is smoldering and alluring without being a macho stereotype and maintains his humanity throughout. He’s got a heavy load of guilt, but he reads like a real man and a real person. He violates all the rules that Amelia has to live by to avoid the ghosts she sees everywhere, but the romance between them is appropriately halting and tentative enough that the transition from a lifetime of being closed up to the start of opening up feels organic and natural.

The spookiness and the sense of isolation of being the only one who can see everything that’s going on are consistent through the book, as are the characters that are placed in it. They’re often charming individuals; and the fact that they’re all southern never really becomes overbearing, almost entirely avoiding the stereotypes of the region, while still addressing regional differences. And best of all, since the whole book is told in the first person past tense, there are hints throughout that there’s more going on than Amelia knows. The last paragraph of the final chapter is a fantastic hook into the next title.

A first book can come off a little overly explanatory, but The Restorer manages to feel like a story being told by an old friend. All the digressions go somewhere in the end, and anything left unfinished is still tied up nicely into the lead-in for the second in the series (out at the end of the year). The Restorer is not overwrought, but it is an involving and nicely challenging read, and Amanda Stevens is more than happy to assume you’re smart enough to keep up, which is exactly how a book like this should be written: with wit, charm, and a thoroughly likable main character.