Restless in the Grave 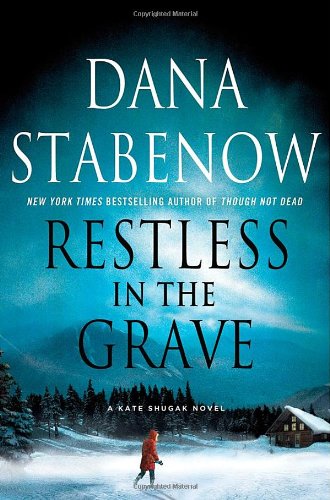 “Restless in the Grave continues the Stabenow tradition of gritty, compulsively readable, all-too-human novels. Happily for Danamaniacs and new readers alike, there’s no sign of Ms. Stabenow slowing down, so we can look forward to another armchair trip to Alaskan intrigue.”

Dana Stabenow, like many prolific authors, writes multiple series plus standalone novels, most set in Alaska or its surrounding waters, and all consistently excellent.

In Restless in the Grave she combines characters from the Kate Shugak series, now up to 19 volumes, and the Liam Campbell series, only 4 volumes and last seen in 2003—an idea that will grab her fans (the aptly named “Danamaniacs”) but which ultimately disappoints, as Liam and his wife serve only as a launchpad and conveyance for the plot.

The book delivers the usual Kate Shugak mystery, full of sly or savage action and Bush Alaska politics and culture spiced with sexy moments. In many ways Kate, an Aleut, embodies the land she lives in, a place where it’s impolite to ask nonnatives where they come from or why, because anyone not born there needs a compelling reason to live in such a harsh place—and the trouble they leave behind them often follows.

Alaska remains a modern-day frontier with Wild West overtones, which allows Kate to get away with illegal or unethical moves in her investigations that she’d be caught and punished for elsewhere. Half the book’s suspense comes from wondering if she’ll get out of the dangerous fixes she gets into. It sure helps to have a trained half-wolf as a partner!

Kate’s environment combines modern city, outpost town, national park, and deep, hostile wilderness, where to get around one must fly or ski as often as not, or ride a snow machine or ATV, or drive a rugged truck—that is if the few roads across this vast terrain are open for travel.

Alaskan winters last a looooong time, so many of Ms. Stabenow’s stories, including this one, are set during the cold and dark season. This gives a noir flavor to the series, enhanced by the depravity exhibited by the evil or desperate characters Kate must hunt and fight.

Kate herself is tougher than your average heroine, seeming almost feral at times, but this jives with her untamed world. This woman can shoot her own meat for the table or survive in the backcountry solo, and she knows her way around the legal system as well. She takes no garbage from anyone—to the point where she’s sometimes so rude you just want to slap her! But like tough heroes in other stories, she has a heart of gold and clear sense of right and wrong that she will die to honor, and she protects others before herself in true heroine style.

Ms. Stabenow portrays Kate’s Alaska with an authority gained from experience as a resident and her thorough and professional research. (Danamaniacs will recognize the USCG cutter Munro that cruises through the story as the ship Ms. Stabenow did a tour on when researching another book.) Although Ms. Stabenow keeps the story going by embedding lifestyle, character, and historic details into the action and dialogue, she occasionally pauses to insert an eloquent description of place:

“. . . [M]ountains emerged from the night sky, shorter than her own but just as sharp edged and menacing. At first white ghosts against the dawn, with the rising of the sun they turned a slow, pale magenta, the brief glorious alpenglow of sunrise and sunset on a clear arctic day, before coalescing into the icy, ravenous peaks and ridges of their everyday clothes.”

Then on with the story. This one spends a lot of time airborne as Kate hops between settlements pursuing leads that tie together sabotaged planes, victimized heiresses, and a leading citizen—one of many pilots in the story—with several fingers in several dirty pies.

The labyrinthine plot ties up neatly at the end, even throwing in the answer to an open question from a previous novel in the series, meanwhile leaving a door open to further adventures.

Restless in the Grave continues the Stabenow tradition of gritty, compulsively readable, all-too-human novels. Happily for Danamaniacs and new readers alike, there’s no sign of Ms. Stabenow slowing down, so we can look forward to another armchair trip to Alaskan intrigue.