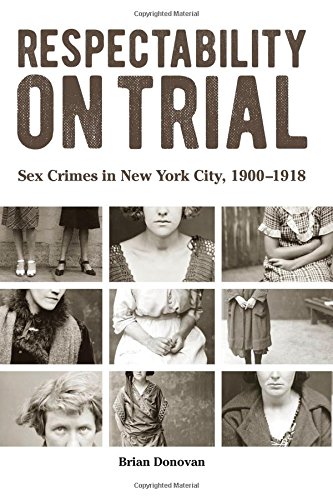 Brian Donovan’s newest study, Respectability on Trial: Sex Crimes in New York City, 1900–1918, is an invaluable addition to the ever-growing library of scholarly works on the history of Gotham. His well-researched and carefully argued work reminds New Yorkers that there’s always something more to learn about their remarkable city.

His analysis provides a unique insight into the social tension taking place during what he identifies as the nation’s “so-called ‘first sexual revolution’ (1900–1920).”  His book is a humane tale of the woe suffered by all-too-many people—especially women and girls—in the sex wars that distinguish the city’s modernization.

The 35-year period from the 1893 Chicago World’s Colombian Exposition to the 1929 stock market crash represents one of the most socially disruptive—and sexually traumatic—eras in American history. During this period, the U.S. became not merely a modern nation, but took its initial steps to become an international power as well. It also saw sex become a social commodity.

This tumultuous period can be divided into two phases. The first is often referred to as the Progressive Era and took place between 1893 and 1918. It witnessed the nation besieged by reports of widespread “white slavery,” the interstate transportation of girls and women for commercial sex that led to the passage of the 1910 Mann Act and culminated in World War I.

The second phase witnessed the postwar recovery that led to the passage of the Volstead Act (1919) imposing abstinence and the adoption of the 19th Amendment (1920) granting women the right to vote. It culminated in the “Roaring ’20s” and the playing out of a peculiar socio-economic experiment that culminated in the unraveling of U.S. and world capitalism that fostered the Great Depression.

The nation was being transformed by the combined forces of industrialization and urbanization; domestic migration and foreign immigration recast what it meant to an American; the “new woman,” often single and unmarried, entered the wage-labor market, secured the vote and, ultimately, confronted perhaps the deepest challenge of modernization, a new sense of selfhood, of personal power and, especially, of sexuality. The traditional Victorian moral order was eroding and conventional notions of female purity, modesty and passivity—their alleged respectability—were being uncut by the new American.

During this period, the U.S., and especially its cities, were remade—and none more so than New York. It’s often forgotten that what is known as the 21st century’s Big Apple was only forged into being on January 1, 1898, with the consolidation of the existing City of New York and Brooklyn, the East Bronx, most of Queens County, and Staten Island. Five boroughs became one city, Gotham.  And Gotham was the nation’s first metropolis, with its population doubling to 6.9 million in 1930 from 3.4 million in 1900.

Throughout the city, alcohol consumption, gambling, prostitution, dancing and— worse still—the darkened movie theatre fostered social evils. Early movie houses were stuffy retail storefronts or arcade backrooms created a uniquely new venue for public association. These settings enabled anonymous strangers, white men and women (African-Americans were prohibited from the city’s early motion picture theatres) to sit next to each other and socialize—unchaperoned! This encouraged flirtation and sexual encounters, particularly touching and kissing. No less an authority on moral virtue than the great social reformer Jane Addams railed against the movies. “The very darkness of the room,” she warned, “. . . is an added attraction to many young people, for whom the space is filled with the glamour of love making.”

Donovan, an associate professor of sociology at the University of Kansas, is author of White Slave Crusades: Race, Gender, and Anti-vice Activism, 1887–1917.   Respectability on Trial carefully detail the contested social terrain of sexuality and the challenges faced bringing sex crimes to justice a century ago.

He employs an engaging style that mirrors, in the best sense, a storytelling voice like those in a good documentary allowing some in his cast of characters to speak for themselves. He introduces such now all-but-forgotten New Yorkers as Margaret Peters, Sarah Gross, Sadie Marsa, Martha Poulaillon, Jennie Toelberg, Belle Moore, Vera Olcott, and John Rogers. Their stories, along with many others, reveal how the city’s judicial system addressed sex crimes, thus helping determine the boundaries of acceptable sexuality.

Donovan organizes his study along three broad categories—rape, prostitution, and sodomy. He carefully analyzes each category drawing on the most relevant scholarly literature (on the city and legal theory), contemporary sources (e.g. the New York Times and other press of the day), and the transcripts of a wide range of sex-crime trails. This method enables him to not simply reveal an untold aspect of city life, but show how it was played out in the lives of ordinary New Yorkers.

His cast of characters include many victims—mostly women—seeking legal redress from a criminal prosecution for being sexually victimized. In addition, his cast includes the defendants (mostly men) charged with sexually harming the accused, the prosecuting attorney, the defense council, the judge and— something we don’t have today—an activist jury that directly engaged in court proceedings.

A century ago, sex crimes had a different definition than they have today.  For example, rape had a more formal meaning, involving extreme violence, multiple attackers, a victim being unconscious or attack on a child.

A second example is the concept of “seduction” that was recognized as a serious crime. Donovan defines seduction as “where men leveraged economic resources for sexual gratification.” In effect, a man promised to marry a “chaste” woman who he had sex with and then reneged on his promise. The victim suffered not only her loss of virginity, but also her loss of reputation (i.e. “name stain”).   “Forced prostitution” was different that conventional prostitution, resembles what today is identified as “sex trafficking.”  Finally, sodomy was understood as an immoral act of “nonnormative sex,” a degeneracy.

In nearly all the cases that Donovan documents involving women, the burden of proof rested on the testimony of the person who suffered the criminal offense.  He details how, in an era before rape shield laws, the female victims who testified were forced into a “double bind”—“female victims were expected to resist their attacker but were deemed unfeminine for doing so.” Did she sufficient resist the attacker’s efforts or did she consent to having sex by remains “passive”? Worse still, was she a virgin or did she have a history of being flirtation? While the burden on a female accuser is considerable less than it was a century ago, the blame-the-victim attitude continues to play out in many cases, especially in college cases with male athletes involved.

One of the secondary themes Donovan explores is the role of popular culture in framing the jury’s perception of sex crime. He documents the considerable influence of seduction-and-abandonment as well as white slavery narratives, noting “white slave narratives shaped expectations as to how legal actors should tell and hear stories of forced prostitution in the courtroom.” He stresses that these “melodramatic representations” appeared in books, magazine articles, silent films and newspaper exposé. They shaped popular consciousness and the attitudes of the jurors, white middle-class men.

One serious question about Donovan’s invaluable study concerns neither his scholarship nor the pathos he shows to the victims of sex related crimes he documents. Rather, Donovan’s argues that the period between 1900–1918 represented America’s “first sexual revolution,” a revolution that coincided with the nation’s fin de siècle industrialization and urbanization. But was it?

During the half-century between the pre-Civil War era and the 1893 Chicago Exposition, the U.S. witnessed a period of social gestation characterized by the adoption of the railroad and the telephone, let alone the “call house” that industrialized prostitution.

Beginning in upstate New York in what was known as the “burned over” district (named for its religious fever), the Second Awakening or the Great Revival inspired millennial and evangelical movements throughout the country. It also infused a radical utopian movement that included the Shakers, New Harmony, Phalanxes, Icaria, and Oneida communities, among others. A distinguishing feature of these communities were new notions that challenged social convention, whether involving communitarian property relations, equal gender relations, free education, an appreciation of the land and unconventional sexual relations. Perhaps Donovan will explore this era in his next project.