RESPECT: The Poetry of Detroit Music 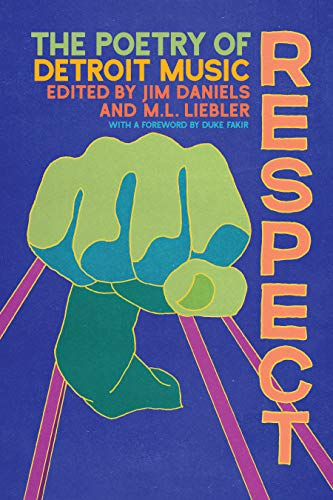 “We are all invited to dance through this volume of writings that celebrate still the music and those moments of being alive.”

Like listening to a replay of golden oldies on your radio, hearing these poems not only helps us recall songs and atmospheres, but brings insight to the musical scene and form. Music has always done this, but Detroit offers a special tone and beat of the streets. One can almost sing and dance to the lyrics, rhythms, and images here.

Editor-poets Jim Daniels and M. L. Liebler are native Detroiters deeply entrenched to the pulse and tone of their city. They provide a brief introduction of the origins of the scene and the coming together of their big book. “For all the national heat taken and the various autopsies of Detroit that have been performed over the decades, it is still the city that gave (and continues to give) the world some of its best music across all of the genres. In Respect we have made an honest attempt to be inclusive of musical genres and to feature the rich diversity of America’s poetic voices.” The book is truly collective and comprehensive.

Duke Fakir of The Four Tops provides a short foreword, noting how “A lot of the story of Detroit’s contemporary music scene started in the late 1950s, first with Little Willie John, John Lee Hooker, Jackie Wilson and then with The Motown Story.”

But the real sweetness is in the poems assembled here, as in Keith Taylor’s “Detroit Dancing, 1948”:

So I taught myself dancing,

downstairs, at home, in the old neighborhood,

waltzing the broom, my partner, from coal bin

to canning jars, learning to finish

with a flourish (dipping its bristled head

gently toward the cement), until I could

walk into any club anywhere in the city,

pick out any woman, turn her once

across the floor, and, if I didn’t sweep

her off her feet, I hear at least

(and this was almost enough, then)

that I was certainly light on mine.

Or, as Aretha Franklin sang it so well:

You know we got it?

We are all invited to dance through this volume of writings that celebrate still the music and those moments of being alive. A welcome addition to any collection.