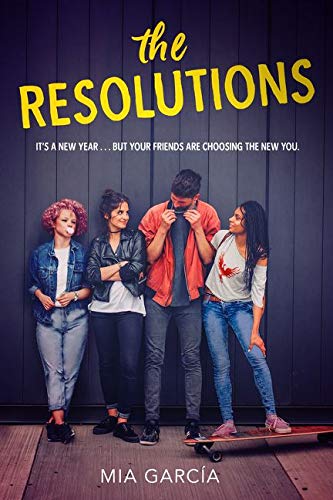 “Garcia has created a way for these four teens to challenge the way they view themselves, each other, their community, and what they each dream for their future.”

Mia Garcia’s second novel tells the story of four Latinx high school juniors who have been best friends since forever. Set in Denver, these four inseparable teens have followed each other’s every move, from triumph to crisis. And they have a long archive of texts to prove it.

With senior year approaching, Jess, Lee, Ryan, and Nora are increasingly concerned with college admissions, SAT’s, college scholarships, and whether to even attend college at all. It is against this backdrop that Garcia introduces the inescapability that the paths they choose to pursue for themselves following high school have the potential to take them in different directions and places away from each other. Can they all move forward if it means leaving each other behind? It is with this additional stress in mind that Jess has a plan for the group.

To set the novel in motion, Garcia has Jess disrupt the group’s annual New Year’s resolution ritual. Instead of the usual self-designated resolutions that are often unfilled and more often disregarded, Jess proposes having the group assign a resolution to each friend, and that they all be held accountable.

These resolutions are not dares. They are not meant to push each other over an edge. Instead, as Jess puts it, “’Think of all the stuff we’ve always wanted for each other. All the things we might not see in ourselves, but that the rest of us can,’ Jess said. ‘Also a bit of tough love.’”

For Ryan, who is stuck in a rabbit hole of break-up pain, the resolution is to kiss someone he knows is wrong for him.

Nora is challenged to find a way to expand her cooking skills by following her dreams that will take her away from her mom’s Puerto Rican restaurant—despite having loved and helped establish the eatery with her extraordinary baking skills.

Lee gets off easy as she’s told to improve her Spanish—something she has wanted for herself.

Jess is the last of the group to be assigned a resolution. At first glad for the group's acceptance of her idea, she quickly regrets it when she is told to say yes to everything. She is not sure how that will help her thrive.

While their bonds are never tested, they are quickly stretched and ultimately strengthened by the tests that they face while trying to fulfill their imposed resolutions. As the novel progresses, it becomes clear that each character is happy with the resolution the group has forced on them.

Garcia, whose debut novel, Even If the Sky Falls, was published in 2016, has structured The Resolutions so that each chapter is told from the point of view of one of the four teens. As the third-person narrative shifts between characters, readers get to peek into each of their personalities, their place in their families, and their place as part of the Latin American community in Denver.

Possibly the most revealing moments in the novel might be the group texts which are particularly well developed. The texting sections—scattered throughout the chapters like a series of documents—offer the reader a different angle to peek into each teen’s personality.

The adults in this novel, while supportive, are too often overly and unrealistically supportive. At other times, they are overly supportive to the point of being controlling and suffocating. Garcia’s presentation of these coming of age teens is much more appealing than her portrayal of the adults in their lives.

Jess’s mother, who works at the Latino Community Center, volunteers Jess for endless tasks. It seems like Jess’s mom takes too much time in having her daughter be the best volunteer at the Center. Seemingly clueless about Jess’s schedule, which already includes several hours a week volunteering at the Center, she volunteers Jess for yet another task and then tells Jess, “Think about it. I said I would ask and if you think it’s too much, you know I have no problem turning it down.” She might turn things down for herself, but she does not give Jess the space to turn anything down and this adds tremendous stress to an over committed Jess.

Possibly the most revealing moments in the novel might be the group texts which are particularly well developed. The texting sections—scattered throughout the chapters like a series of documents—offer the reader a different angle to peek into each teen’s personality.

On the eve taking the SAT’s, Jess texts the group.

Jess: For all of us! Including me.

Nora: Everything hurts, and I hate meringues.

Ultimately, through these group resolutions, Garcia has created a way for these four teens to challenge the way they view themselves, each other, their community, and what they each dream for their future.