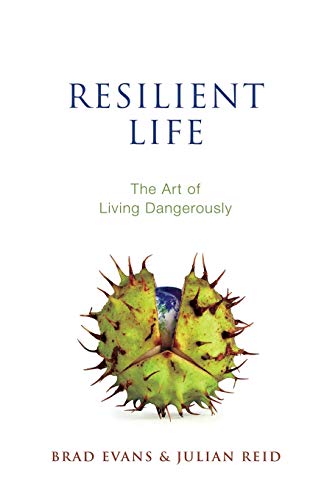 “While Evans and Reid explore such concepts as sustainable and participatory development in reference to the poor south, the book’s curatorial perspective is decidedly Western. Second, their argument holds only if we concur that neoliberalism is here to stay for the foreseeable future.”

Brad Evans and Julian Reid provide a radical critique of the concept of resilience and its traveling companions of vulnerability, insecurity, and catastrophe. Resilience is framed as a universal attribute characterized by complex skills needed to adapt to a hostile world.

They do so largely through the lens of climate change and the increasingly dire predictions emanating from the scientific world. They are not interested in arguing the science of it one way or another. Rather their aim is to demonstrate that the resiliency discourse, which equates humans as resilient subjects, is part of a fundamental political shift from a liberal to neoliberal political regime; a new fascism with disastrous, anti-humanist implications.

Evans and Reid contend that the liberal paradigm that equates the state with security and, therefore, stability is being transcended by a neoliberal replacement that frames states as insecure, unstable, and unable to protect its citizenry against a volatile natural and social world—an era where danger, threat, and instability will be the norm, rather than something against which we can secure ourselves.

In lieu of state providing security, in the new neoliberal construction the burden falls upon the individual who must be resilient. Resilience can be cast in social or individual terms. I would contend that in keeping with close alignment to neoliberal thought that ultimately resilience is squarely situated within the individual, since they make up the collectives of which they are part.

This kind of thinking is making a comeback among biologists who are talking about “multi-level selection theory” rather than the old binary of group versus individual selection. Put crudely, it’s good to be a moral person but far better to be surrounded by a group of moral people (or perhaps just kin) who together must navigate a hostile world.

Resilience is one of those concepts that sounds intuitively appealing, like one of its predecessors, “adaptability.” Both are strongly evolutionary in origin, which merits deeper interrogation. Adaptation, for example, was discarded by cultural anthropology back in the 1980s because it was so unclear what was adaptive and what was not in the short term, long term, under varying conditions, etc. Resilience, I would argue, is fraught with the similar problems.

Further, because it is a biological and evolutionary concept it becomes very easy to blame the victim for not being resilient enough (i.e., not having the right genetic stuff) in the face of danger.

Evans and Reid set out to reveal the deceit in the resiliency concept. They begin with a consideration of the recently trendy idea of the “Anthropocene.” Think here of the previous “cenes” or geological/climatological epochs, the most recent being the Holocene (the last 12,000 or so years).

The neologism of the Anthropocene is meant to capture the idea that unlike previous epochs that were shaped by natural phenomena, humans are now the principle designers of our lived environment because of scale and impact. We are no longer bit players, but rather at the very center of environmental stewardship and the Earth’s future, or its lack.

These themes play out in popular films: Code 46 (2003), Sleep Dealer (2008), Elysium (2013), and the Hunger Games (2012, 2013) juggernaut. All envision a distant, and not so distant, future characterized by a protected elite surrounded by highly vulnerable masses. The political implications of the resiliency concept are obvious—elites are more resilient (and therefore more highly valued or worthy) than their poor, susceptible counterparts—with all of its 19th century social Darwinistic tone.

Additionally, because the trope of the “cene” is invoked, the Anthropocene carries with it automatically baked-in scientific legitimacy that cannot be lost on the authors.

Right up front in the book, not surprisingly, they address the socially constructed nature of knowledge; “Bringing into question prevailing dogmas, reified assumptions, along with uncompromising holistic claims about truth . . .” For knowledge and discourse become powerful ideological tools defining that define people as particularly conceptualized subjects of a political order.

One can, thus, see how quickly a concept like “resilience” can become universalized and moralized into a trope of heroic adaptation against endemic risk, threat, and danger that are themselves naturalized as normative expectation. Resilience, then, is an ideological-political concept and “a key strategy of contemporary regimes of power that hallmark vast inequalities in all human classification.”

This gets injected directly into other important concepts and practices, such as “participatory development,” a concept most closely associated with economic development in the poor south. Securing a sustainable future for those most vulnerable is only one dimension of the participatory development paradigm. Its darker side places the burden of sustainability and environmental stewardship on the poor and marginal; those most threatening to the security of the rich north.

As Evans and Reid note, “Alleviating threats to the biosphere requires improving the resilience of the poor, especially, because it is precisely the poor who are ‘ecologically ignorant’ and thus most prone to using ‘eco-system services’ in non-sustainable ways.”

The authors continue this line of reasoning by noting that the concept of sovereignty and the liberal state is rapidly eroding in the West and never existed in the first place in many other parts of the globe. Because people are becoming increasingly insecure from multiple, highly contingent and unpredictable sources of threat (from climate change to the ever-shifting geopolitics of violence), resilience replaces the old liberal notion linking states and security in neoliberal discourse. The new norm, in other words, is perpetual human vulnerability.

The 20th century discipline of international relations with its emphasis on sovereignty, diplomacy, stability, and security is revealed as bankrupt in this new world of endemic instability. Small wonder that the U.S. and other western governments have no conceptual grasp, let alone workable strategies, for addressing such things as geopolitical anomalies (governance spaces that have nothing to do with states), failed or failing states, permissive environments (state or non-state with little formal control over their territory), anti-establishment entities, shadow governments and economies, massive human diasporas, or displaced people and refugees.

One need only to look at the past week’s headlines to find considerable geopolitical chaos: warfare between Hamas in Gaza and the Israelis; Russian separatists shoot down a civilian passenger jet over war torn eastern Ukraine; Central American unaccompanied children flood the U.S. border.

To the final scenario, the American response—a last gasp of the liberal politics of homeland security—is to shut the gates to those who threaten our security because they are diseased, criminal, or a potential drag on the economy.

Political discourse also trotted out the standard prescription of promoting economic development back home. As Evans and Reid astutely point out, this discourse will take a turn from linking development (with an economic end) to security to one that links resilience to sustainable development (with a life support end), for the latter is about enhancing adaptive capacity in the face of all manner of unpredictable disruption.

As the authors note, “The human [subject] here is conceived as resilient in so far as it adapts to rather than resists the conditions of its suffering in the world.” That same human subject is rendered as vulnerable as the new normative (therefore naturalized and unquestioned) mode of being.

While we are moving toward a world of multiple forms of vulnerability, Evans and Reid pay special attention to physical violence. Not only do we absorb it and are therefore immunized to some extent from it, but we become shaped by its lethal tendencies. In a rather Hobbesian scenario, they argue that we become inured to violence and the emotional deadening and threshold of everyday violence, in turn, makes us potentially more violent. People become preemptively prepared to act when violence falls unpredictably upon them.

Without getting into the science of climate change (but rather its prophecy), Evans and Reid bring the argument full circle and contend that global climate catastrophe is being constructed discursively as the ultimate end. It is a fog of imminent and pervasive threat beyond which nothing exists. “Becoming resilient in these terms involves the deliberate giving up of any possibility that climate change can be understood as a threat from which we can secure ourselves, as well as the expectation that the state or any other political scenario might be able to protect us from its dangers.”

In closing, Evans and Reid argue that resignation to and chronic anxiety about vulnerability to a hostile world render resilient subjects incapable of imagining a world beyond its catastrophic end. The “art of living dangerously” is their response to the conceptual resignation of a brutish journey to an unavoidable, dismal end.

By cultivating an awareness of the oppressive and totalizing nature of resiliency concept and its entailments that imprisons our humanity, we can push back and resist this grim, dominant discourse and imagine new, emergent, and creative alternatives. We must, in sum, consciously and intentionally revalorize reason and the imagination upon which it is founded toward not yet conceptualized visions of the future.

This is a fascinating book that is sometimes a bit dense in its use of critical social theorists, but it is well worth the effort. The book, still, is not without challenge. First, many people throughout the world have long lived in at best flimsy systems of governance where risk and threat are endemic.

While Evans and Reid explore such concepts as sustainable and participatory development in reference to the poor south, the book’s curatorial perspective is decidedly Western. Second, their argument holds only if we concur that neoliberalism is here to stay for the foreseeable future.

There are very credible arguments that suggest that neoliberalism has buckled. Its core practices of shrinking government, protecting the rich, cutting taxes, privatizing everything, cut social services, pull back on investment in infrastructure and production have done a great job of redistributing wealth the rich in the north.

Neoliberalism cannot solve major economic problems facing the world’s impoverished and middle classes: fairness of governance, economic equality, or bright futures. It does assure, however, that the 1% will be well taken care of. Third, their pathway out of the neoliberal prison—of finding a more poetic self, life as art, cultivate imagination, and so on—does not give us, unfortunately, much of a roadmap.