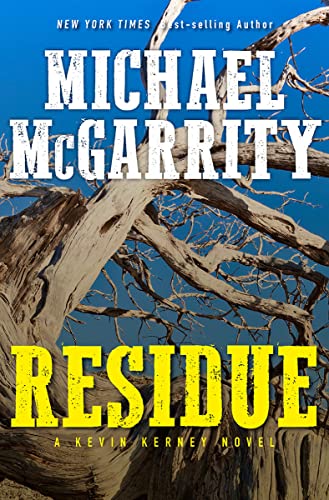 “Residue [is] something of a disappointment. The characters are a little scatterbrained and disoriented, the story moves in odd, confusing jerks across the New Mexico landscape, and the tale is not particularly well told.”

When construction begins to expand the Erma Fergurson Artist-in-Residence Center at New Mexico State University, the skeleton of a woman missing for more than 40 years is unearthed. The remains are identified as those of Kim Ward, a troubled former rodeo competitor who had a brief, rocky relationship with former Santa Fe police chief Kevin Kerney at a time when Kerney had just returned from Vietnam and was struggling with alcohol and symptoms of post-traumatic stress.

Leading the investigation into Ward’s murder, Lieutenant Clayton Istee of the New Mexico State Police learns that the young woman visited Kerney at the Fergurson property just before she disappeared. The problem for Istee is that his prime suspect, Kevin Kerney, is his father.

Residue marks Michael McGarrity’s return to his Kerney crime series after a 10-year hiatus. Beginning with Tularosa in 1996, McGarrity wrote 12 previous novels in the series, culminating with Dead or Alive (2008). He then broke off to write what he thought would be a prequel novel setting out the Kerney family’s historical background.

Hard Country (2012) became a Western historical trilogy that included Backlands (2014) and The Last Ranch (2016). Very popular among Western fiction readers for its historical depth and panoramic settings, the trilogy marked a notable change of pace and perspective that McGarrity needed to set aside in order to return to his police procedural series.

Given that a decade has passed since the appearance of a new Kevin Kerney novel, McGarrity and his editor had to expect that Residue would be greeted by a crop of new crime fiction readers not familiar with the rest of his series. It would be necessary to reintroduce Kerney, so to speak, and provide a fresh take on the character. McGarrity has stated that his intention was to write Kerney’s back story, to explain why he took up policing after returning from Vietnam. A full examination of the character, then, would seem to be in order.

However, Residue doesn’t really spend enough time with Kerney to provide a fleshed-out, appealing central character to new readers. Early chapters contain a certain amount of flat explanation and backstory, but for the most part Kerney yields center stage so often to Clayton Istee and other secondary characters that his character functions more as a prime suspect trying to clear his name than the hero after whom the series is named.

Kerney’s wife, newly retired Brigadier General Sara Brannon, also appears as a very interesting character about whom new readers learn precious little. Was everything said about her 10 years ago that needed to be said? In Residue her role is that of a volunteer investigator helping her husband track down alternate theories for the cold case murder. It seems a bit of a waste to cast her only as a sidekick splitting the legwork with Istee and Kerney’s lawyer.

For a police procedural, it’s also rather inconsistent in certain aspects. While Istee is quite high on his state police colleague Agent Avery before being (appropriately) forced out, Avery’s character comes under very negative scrutiny thereafter. At one point, Kerney’s lawyer chortles to himself that “he’d smear egg all over Agent Avery’s face, as well as the incompetent bureaucracy of the New Mexico State Police.”

Even more perplexing is the boneheaded decision by Kerney and Istee to impersonate active state police officers in order to gain entry into a nursing home to interview a resident. Since this stupid play results in arrest warrants that plague them as the plot chugs onward, readers scratch their heads and wonder why experienced professionals would come up with something this dumb as a pretext to enter a facility through the back door rather than just walk in the front door and ask their questions. Not very believable.

Neither can we ignore the treatment of minor character Lucille Trimble’s dementia. When Istee attempts to interview her, he’s accompanied by an Adult Protective Services caseworker, Louise Fowler. McGarrity’s portrayal of dementia is a little hit and miss, but when Fowler describes the interview afterward as “pretty weird” while laughing about Lucille’s inability to recite the alphabet, the fact that the narrator tells us Istee likes Fowler and says “she exuded an air of nonjudgmental compassion” is a complete joke. No, she doesn’t. Fowler’s clearly insensitive and unprofessional. The scene should have been rewritten or deleted.

At the end of the day, while diehard Kerney fans will welcome the appearance of a new crime novel in the series, readers in general will find Residue something of a disappointment. The characters are a little scatterbrained and disoriented, the story moves in odd, confusing jerks across the New Mexico landscape, and the tale is not particularly well told. All in all, not a crime novel to recommend to your friends.