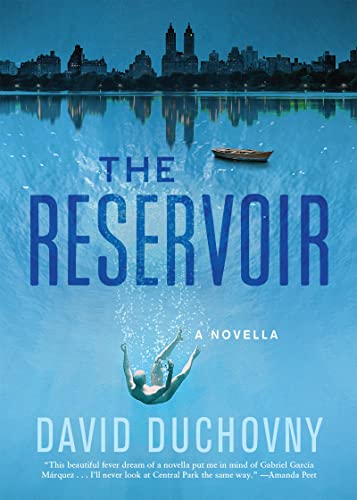 At 128 pages, The Reservoir is described as a novella. Fever dream would be more apt.

This is not the first book actor David Duchovny has written and he has talent, but this is the sort of book that feels not fully thought out. It’s like Duchovny had an idea and set off to write it without knowing where the idea might take him or maybe he wanted to get it published before Covid was a distant memory.

The pace here is very brisk, but at times the destination is comically absurd, funny, and very dark.

Duchovny’s character Ridley is a dreamer and youngish retiree with a lot of time on his hands. He has a west side window overlooking the reservoir and the expanse of Central Park, and the setting for the book are the dark days of the Covid-19 pandemic.

Ridley is holed up in his apartment and is more extreme than most were back in the early Covid days. He never goes outside and is isolated from his daughter whom he more or less ignores. No surprise then that his behavior drifts to the hallucinatory. He sees, hears, and thinks about a lot of things, but in the middle of the night, his focus becomes some apartment lights blinking on and off in a window across the park on Fifth Avenue.

Ridley is convinced someone is sending him a signal, and he becomes obsessed. He tries communicating with the person, switching his own lights on and off until he gets a sign. He can’t seem to communicate with the person, but one night, he grabs his binoculars, and spies the silhouette of a woman in that far off window.

For the first time in a long time, he leaves his apartment and scrambles across the park, stalking her building until he thinks he sees someone who resembles her.

From this point on, the character must meet her, and this is where the book takes off into the character’s fevered brain. Things develop with the woman, and he finds himself chasing her through the park yelling, “I’m Ridley.”

He manages to get very close to her but somehow never catches a glimpse of her face. The reader begins to wonder at that point who she is and if she might even be his daughter. Ridley begins visiting Central Park at night—never a good idea. First, he finds himself in the infamous Ramble with a large gay man who is fond of telling bear jokes. At another point, Ridley finds himself in the reservoir chasing the woman in a rowboat. He even winds up IN the reservoir floating through all sorts of meaningful debris.

“This is where you should have been, Ridley! He wanted to say to himself. Not up there but down here in the middle of things! That little cutout in the sky that he’d called home for so long—it appeared so small compared to what he’d just seen,” Duchovny writes.

Exactly what Ridley has seen in the reservoir needs to be experienced through the reading. It feels like the entire book is a metaphor for a lost New York. And the ultimate fate of Ridley and his shadow woman points to a city that is not headed in the right direction.