Rescuing the Planet: Protecting Half the Land to Heal the Earth 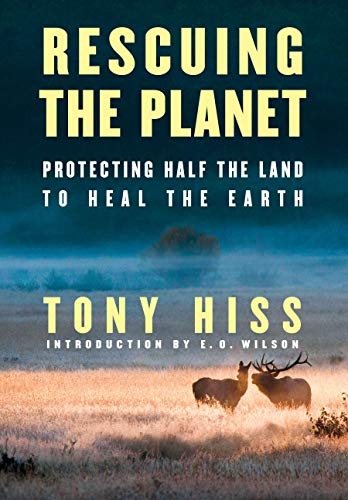 What if all that was needed to stave off an impending mass extinction of life on Earth was to set aside half the planet for nature?

Impossible? It’s already happening, and Tony Hiss’ inspiring Rescuing the Planet celebrates the citizens and scientists who are helping humanity protect and flourish alongside places as small as a land trust and as vast as the Appalachian Trail.

“As a direct result of humanity’s destructive action on the landscape, one million species of plants and animals are likely to go extinct, many within the next few decades,” writes Hiss. A dreary and dreadful statistic, one like all too many other realistic portents of seemingly irreversible harm to the only planet we have to live on. Whether from habitat loss or other reasons, some species and the ecosystems they rely on have passed the point of no return. Hiss is hopeful yet realistic: “But the sooner progress can be made the less regret there will be to carry forward.”

Thankfully, Rescuing the Planet tells stories of successful innovation and imagination, whether it’s revitalizing drought-scarred and over-grazed Apache Highland landscapes, creating wildlife overpasses to give animals safe passage across roadways, installing “bird friendly” (tinted or dotted) windows to reduce fatal collisions, eliminating the light pollution that causes a nocturnal “insect apocalypse,” or launching ICARUS (International Cooperation for Animal Research Using Space, set for 2030), which will upload for immediate access data on the migration and other movements of upward of 15 million tagged birds, animals, and other creatures.

Central to Rescuing the Planet is the importance of listening to often ignored voices. The success of the campaign to protect Canada’s Boreal Forest, for example, stems in large part from the persistence and leadership of Indigenous tribes.

Humans aren’t the only ones with stories to tell. By radio collaring wolves, researchers realized these predators roam far beyond human expectations across a wild that doesn’t acknowledge international borders, but that did help inspire the Yellowstone to Yukon Conservation Initiative (Y2Y). Spanning 2,000 miles, five US states, and four Canadian provinces, Y2Y engages some 300-plus organizations and First Nation communities, as well as individuals from ranchers, foresters, scientists, and local advocates all working together to preserve and conserve some 700 protected areas, including Yellowstone National Park and Banff, Canada’s first national park.

But Rescuing the Planet doesn’t merely report anecdotes of courage and compassion. Hiss takes readers on a tour of the biosphere and its atmospheric rivers of moisture-rich air, not to mention our world’s undersea and underground rivers, the disturbing regularity of mass extinction events, island biogeography and the “species-area relationship” (the larger the area, the more species in it until the landscape reaches carrying capacity), and much more to remind readers we live on an amazing planet.

Hiss replaces that old and over-asked question of “Is it too late?” with one from Maine environmental consultant Ole Amundsen, who weaves science with sentiment to ask: “Who’s the Thoreau of your area?”

With any luck, it’s one or more of the many readers Rescuing the Planet deserves to have.