The Rescue of Belle and Sundance: One Town's Incredible Race to Save Two Abandoned Horses (A Merloyd Lawrence Book) 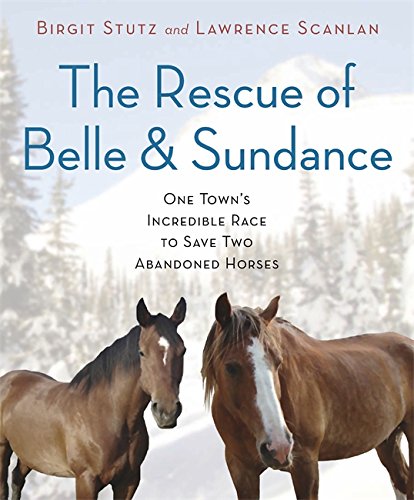 “Save this book for a day when you really need a lift. It can be read in one sitting and will restore your faith in humanity.”

Save this book for a day when you really need a lift. It can be read in one sitting and will restore your faith in humanity.

It doesn’t matter if you know the happy ending before beginning, because the drama is in the story of how a remote little town in British Columbia saved two pack horses that had been abandoned in the mountains during summer and got stuck up there when winter rolled in. By the time someone found them, they were compressed in a space the size of their bodies, walled in by snow six feet deep, and several months into starvation.

The guy who left them there had decided to “let nature take its course.” The people who found the horses felt otherwise, and rallied their community to get the animals out. This involved hand-digging a passageway longer than ten football fields through snow higher than their heads; then leading the horses through this slot to a snowmobile trail and down almost 20 miles to a location where they could be loaded onto a trailer and transported to safety.

All this occurred in the pit of winter, with daily temperatures well below zero. It was an awesome engineering effort, and an inspiring tale of people pulling together to do something enormous and self-sacrificing simply because it was the right thing to do.

To which the authors countered: “This is a commonly expressed response to the suffering of animals, and [we found] it bizarre. Surely every act of generosity has its own genesis? Where is it written that showing kindness to animals comes at the expense of kindness to humans? Helping is helping. Period. Had there been people stuck upon that mountain . . . a great many others in the valley would have felt the same instinct to help. . . . Up here, ‘Help thy neighbor’ is a commandment bred in the bone. We wouldn’t survive otherwise.”

The urge to help, in this case, wasn’t limited to the locals. Much aid was offered by recreational snowmobilers, along with strangers far and wide who were made aware of the situation by the media in response to Ms. Stutz et al. spreading the word.

The events covered in The Rescue of Belle and Sundance became a public story, and this presentation of it is more emotionally engaging than many novels designed to put your heart through the wringer.

The authors’ understated reporting enhances the simple facts of the story, made more intense because Ms. Stutz participated in the rescue and recounts it with the accuracy and honesty of good journalism.

The negative elements are so heartbreaking, so appalling, it’s almost impossible to not wince or even cry out; the positive parts provide such relief, and leave such a warm afterglow, that you have to sit for a moment and bask in it after closing the book.

The book itself is physically attractive: an unusual size and shape that fits comfortably in the hand, with a nice cover and jacket and paper, more than 30 black-and-white photographs, no conspicuous typos—doubly impressive for a work not produced by a major publishing house.

Inside the book, the region’s way of life is realistically portrayed—and fascinating for its own sake, because it is so different from what’s known by most people these days, who live in urban and suburban environments. Shades of the Old West in some respects, augmenting the heroic quality that pervades the narrative. But that heroism is, as the authors note, bred in the bone.

“Pure instinct had kicked in,” they explain. “We didn’t stop to think about how this rescue attempt might unfold or how much time it would require or what the odds were of succeeding. . . . It may be that the pioneer spirit still prevails in this remote valley. Or that in a small town, a common cause is more keenly felt. On big city freeways, commuters pass stranded drivers all the time, knowing that formal help (a police car, a tow truck) will soon arrive. But on a country road, the dispatching of formal help takes longer, so we stop for stricken travellers. Odds are that in the broken-down car sits someone you know, a neighbour or friend or someone who knows a neighbour or friend. In the Robson Valley, it isn’t six degrees of separation. One or two is more like it.”

And that applies to critters, as well. Hence the rescue, which teaches the reader as much about horses as it does about people. One doesn’t need to love equines to fall in love with Belle and Sundance and to root for them throughout the story. Their courage and will to live match those of the people who freed them.

So kick back in a comfortable chair and savor this lovely story. Then share it with your friends and family, so they can be heartened, too.