Republic of Detours: How the New Deal Paid Broke Writers to Rediscover America 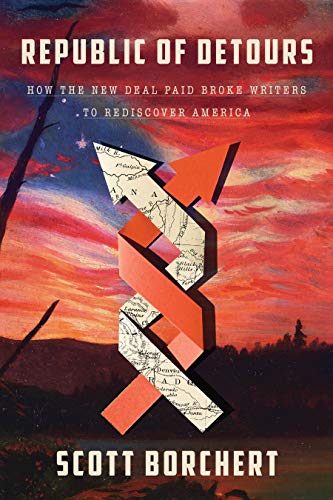 “Borchert’s history is bound to appeal to readers interested in the American 1930s, the careers of noted writers, and the U.S. government’s tumultuous foray into book publishing.”

Launched in 1935 and employing more than 6,000 individuals at its peak, the Federal Writer’s Project (FWP) was a New Deal relief program aimed at providing work to white-collar workers—many poets and novelists or occasional writers, others teachers, reporters, lawyers, and librarians, laid off during the Great Depression. In Republic of Detours, Scott Borchert offers a wonderfully readable and colorful account of the program and the writers who produced “rich and weird and fascinating” guidebooks to each state in America.

Borchert calls it the “biggest literary project” in history. Headquartered in Washington, DC, with offices in each of 48 states, the project had writers out in the field throughout the country, conducting interviews and gathering even arcane data for more than 1,000 titles. Besides the guides, there were publications devoted to cities, territories, rivers and mountains, folklore, and ethnic groups, among other aspects of American life.

The author became fascinated by the FWP after delving into the complete set of the state guides that his Old Uncle Fred kept in the attic of his Connecticut home.

The project employed well-known writers like John Cheever and Richard Wright, as well as such oddballs as the drunken novelist Maxwell Bodenheim and the legendary eccentric Joe Gould (An Oral History of Our Time), who “lurked on the fringes of office life.”

All were at different stages in their careers. All had been on relief, but now had work, thanks to the Works Progress Administration.

Borchert, a writer and former book editor, focuses on a handful of major figures, beginning with Henry G. Alsberg, FWP’s director, a journalist with “anarchist-ish” leanings (he helped edit his friend Emma Goldman’s memoirs), who, at 52, took the job after “a hodgepodge of a career.” Alsberg proved a “crucial visionary” for the FWP. In fact, he secretly hoped the guides would be “high-quality work of lasting value,” when the stated purpose of the project was simply to keep writers busy and above water.

Alsberg got his wish.

The guides won uniformly appreciative reviews. The critic Alfred Kazin called them “an extraordinary contemporary epic.” The books constituted “a vast embrace of the American land and all that it contained [resembling] something dreamed up by Walt Whitman,” writes Borchert.

“For books that are ostensibly travel guides, the FWP publications have a habit of wandering off—steering, more often than not, down back roads and toward the dead end of American history,” he writes. At once “exuberant, suggestive, slapdash, overdetailed, and overconfident,” they “convey essentially a single invitation to explore, to roam, to enquire.”

Borchert’s portraits capture the full range of writers on the project. In Idaho. State director Vardis Fisher, who declared himself “the only unemployed writer in the state,” wrote nearly the entire state guide by himself. With a Ph.D. in literature from the University of Chicago, he was one of many participants with a scholarly bent.

In Illinois, at the age of 24, the hobo and radical writer Nelson Algren became a field worker for the Chicago office, amassing experiences that shaped much of his future fiction, including Never Come Morning, The Man with the Golden Arm, and The Neon Wilderness, all suffused with big-city life.

Borchert details the experiences of these and many other writers, tracing friendships, rivalries, and conflicts between Communist Party members and Trotskyists. At times, the turmoil within the FWP almost matched the uproar outside, where conservative red-baiters attacked the project vehemently for employing subversive writers.

The FWP sputtered to an end under attack by Texas Congressman Martin Dies, Jr., and the House Committee on Un-American Activities. The guidebooks have since become collector’s items; many have been reprinted and remain available in paperback.

Borchert’s history is bound to appeal to readers interested in the American 1930s, the careers of noted writers, and the U.S. government’s tumultuous foray into book publishing.