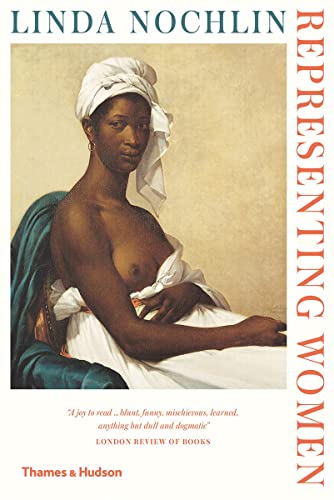 “through the lens of the women they depicted in their work, women as warriors, as workers, as prostitutes, as mothers, as lovers, ever present even in absence, every work shining a light on the (in-process) female path toward equality, agency, and presence beyond art.”

One of the best things about the re-publication of Representing Women by the late Linda Nochlin (she passed away in 2017) is that we get another chance to find ourselves a party to an intimate conversation with one of the most influential art historians of our time. Her voice here is as clear and impassioned as ever, her insights on the representation of women even more relevant now, in the wake of the #MeToo movement.

The book begins with an autobiographical introduction in which Nochlin shares with us her initiation into the field of art history and what it meant to her to become a feminist soon thereafter, how the intersection of both fields elevated her work and her contribution, and why she was convinced it mattered in the everyday to understand the dynamics of how half of the world is perceived, treated, and depicted, and of how those representations have affected and will continue to affect the lives of individuals, families, and entire societies the globe over,  not just now, but well into the future.

Here she is, talking about her true coming of age while studying abroad in London:

“By ‘experience’ I do not mean being groped on a crowded railway car by some sailors with whom my friend and I had to share a compartment (this was 1948 and the services were much in evidence); nor do I mean barking at flocks of sheep to see them run as I pedaled up hills in South Wales in the rain, although the beautiful, wave-like pattern of their retreat should in any case be chalked up to aesthetics rather than experience; nor do I mean the romance of staying in a room made roofless by a bombing raid, so that I could look up at the stars from my bed in the heart of London and ponder eternity.

“No, what I mean by ‘experience’ was the growing sense at once of alienation and difference, that realization of identity which one gets only when one has left the shelter of familiar scenes and ways and is cast out into the wilderness of an uncaring world. I could only discover who I was away from home.”

In Representing Women, she channels that desire for identity into essays that study works encompassing the years between the middle of the 18th century and the early decades of the 20th, all taken from the perspective of the conscious ways and unconscious effects of how the artists chose to show, to label, to explain and name women, thus assigning to them characteristics that further defined them, not as individuals necessarily, but more often than not, as representatives of their gender.

This breakdown of motives is at the heart of Nochlin’s work, not just in this book but throughout her illustrious career, and here she does it with an exquisite level of depth. For example, in the essay dealing with Degas and his view of women, titled “A House Is Not a Home: Degas and the Subversion of the Family,” she first details Degas’ family history (his bad relationship with his mother, his hatred of dogs), then the social context of the time and how the family unit was becoming something the government wanted to influence in order to use it as a tool for order within society then. She also looks into the mindset of Degas’ contemporaries, among them, Emile Zola, and reviews events of the painter’s life at the time he painted masterpieces such as The Belelli Family and The Name Day of the Madam.

She then recounts the major conclusions of other thinkers and historians on the different aspects of Degas’ notion of women, citing specific and varied works, and then makes her own comparison, drawing her own conclusions only after bringing actual examples of Degas’ work to bear in the analysis. In this way, she shows the closeness between each one of her arguments and the artworks that confirm the notions she chooses to highlight, all of this painstaking detail put together as an attorney might cobble together his client’s defense argument, proving her thesis as much as it can ever be proven, which, in the case of Degas, is that:

“It is not the image of respectability that he wishes to construct, but its opposite. In one reading, this might be construed as a grotesque reversal of the notion of family piety, the madam, the ‘mother figure’ of the piece, inscribing a notion of maternal abjection, to borrow Kristeva’s locution. The whole brothel setting, with the naked girls pressed together, proffering both their sexual charms and their congratulatory bouquet, creates a sense of family values displaced.”

She punctuates this with the thoughts of Victor Koshkin-Youritzin in “The Irony of Degas,” in which he points out the irony of the Bordello scenes for which the artist is famous, which he says can only be appreciated by recalling the entire body of Degas’ work, especially the many family scenes (Belelli, Mante, Lepic, etc.) with their piercing sense of isolation, and then concluding: “Is there not a rather exquisite irony to the fact that here—not in a private home or polite social gathering, but a mere bordello—one finds probably the fullest expression of human warmth, inter-relationship, and general happiness to be found anywhere in Degas’ work—and moreover, perhaps the only specific example of human giving.” In assigning, then, to prostitutes a maternal role, and to a bordello a familial shape and structure, Degas subverts the notion of family as good and pious, proves Nochlin’s argument, and documents yet another feminine role: the matriarch.

Other artists get the same thorough treatment in Representing Women, namely Géricault, Serat, Mary Cassatt, and Courbet—all viewed inversely, through the lens of the women they depicted in their work, women as warriors, as workers, as prostitutes, as mothers, as lovers, ever present even in absence, every work shining a light on the (in-process) female path toward equality, agency, and presence beyond art.