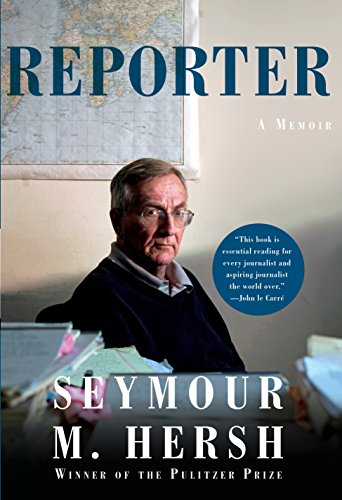 “If you care anything about journalism as it was practiced before the age of the Internet, it’s a must read.”

This autobiography is filled with the type of jaw-dropping anecdotes one might expect from a purebred reporter such as Sy Hersh but one story stands out, precisely because it demonstrates how deeply society has changed over the past 40 years.

The year was 1974 and Richard Nixon had just resigned the presidency. Seymour Hersh, then working for the New York Times, got a tip that Nixon’s wife Pat had been taken to an emergency room with serious injuries. A tipster connected with the hospital called Hersh—who was known to do anything to run down a good story—and told him that Pat had informed the ER doctor that Nixon had hit her.

“I had no idea what to do with this information, if anything,” writes Hersh in his autobiography, “but I went along with the old adage from the City News Bureau, ‘If your mother says she loves you, check it out.’”

Hersh called John Erlichman, who had been one of Nixon’s most trusted lieutenants. Erlichman matter-of-factly told Hersh that he knew of two other incidents when Nixon beat his wife, once when he was president.

Can you imagine that type of scoop landing in a lap of any reporter today? And is there any doubt it would be on the front page? So what did Hersh do, then a star reporter for the New York Times? Nothing.

“I did not write the story at the time, and I do not recall telling any of the editors in the Washington bureau about it,” he writes.

Hersh rationalized that he would only have written about Nixon’s personal life if it had impinged on policy (Hersh's words). “It was not a case where Nixon had gone looking for his wife with an intent to hit her, could not find her, and bombed Cambodia instead,” he explains.

That was Hersh’s line in the sand back then and, in his mind, Nixon had not crossed it.

The idea that this might be faulty logic only occurred to Hersh in 1998 when, he says, he was confronted by a roomful of angry Harvard “female fellows” to whom he recounted the story. They informed Hersh that what Nixon had done was a crime!

That anecdote, told now in the heat of the #MeToo movement, says a lot about Hersh as a reporter and the times he was at the height of his career. Reporters and politicians expected different things from each other. There’s also a story about President Lyndon Johnson defecating in full view of the press to make a point, another story that would have been all over the front page these days.

Hersh is one of the preeminent reporters of the last 50 years as he is quick to let you know. He’s broken front page story after front page story but, for the most part, he’s not a household name. He’s not Woodward and Bernstein even though Hersh arguably had many more scoops.

The answer to why that is lies, perhaps, between the pages of this book. There’s no doubt the reader comes away admiring Hersh greatly, but he’s awfully hard to like. There is little humor in his arsenal, and almost no ability to laugh at himself. Self-aggrandizement and the ruthless pursuit of THE STORY, pushes everything else out of the way. He’s quick to tell you how good he is, time and again.

But no matter how one feels about Hersh’s wire-brush personality, any reader who cares anything about reporting will be gripped by his tenacity. The high point is Hersh’s thrilling retelling of how he tracked down and found Lt. William Calley who was then accused of the premeditated killing of 109 “Oriental human beings” during the Vietnam war.

Hersh, then a freelance reporter, began chasing the story before he even had Calley’s name. But he got it and, as he says, “what happened next was, in a sense, a one-in-a-million bank shot.”

Was it ever! Hersh convinces himself that Calley is being hidden by the Army at Fort Benning, Georgia and travels down there to find him. Wearing a suit and tie and equipped with moxie, Hersh drives onto the base and marches into various offices demanding soldiers bring out Calley.

That ploy doesn’t work but, using a lot of guesswork and his knowledge of the military, Hersh finds Calley’s apartment and then Calley himself who tells him his first-person account of the massacre.

But again, there’s the era Hersh was working in. Life and Look magazines refused to touch the story, even though Hersh had a first-person account and a document proving his case. The story instead went out over a freelance writing service and, of course, was picked up everywhere.

Hersh felt it would change the course of the Vietnam War and was disappointed that it did not, but the story did get the attention of everyone who was anyone in newspaper publishing, and Hersh hit the bigtime.

He was eventually offered at job at the sainted Times even though his relationship with editor Abe Rosenthal was prickly. Hersh tells some great stories about Rosenthal. In one, Hersh decides he needs more space in the Sunday Times and calls Rosenthal at home in the middle of the night. His wife answers and tells Hersh that Abe has left her for another woman and that Hersh should try her number.

There are other tales of reporting derring-do throughout the book. Some are nearly as good as Hersh’s adventure tracking down Calley but too many others get bogged down in details from a time gone by and feel very dated.

Reporter is a mixed bag but, when it’s good, it’s very, very good. The other parts you can gloss over. If you care anything about journalism as it was practiced before the age of the Internet, it’s a must read.