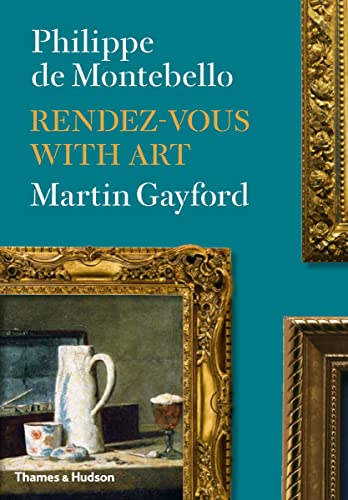 “If you can’t devote the next 30 years of your life to running the Metropolitan Museum of Art, but you do have a hunger to learn more about artists and works of art . . .  you might want to read this book. If it doesn’t want to make you drop what you’re doing and visit the nearest museum, then . . .  you’re a Philistine, and there’s no hope for you.”

Imagine if you had all the time, money, and knowledge of art to fly around the world, visit museums, galleries, and churches in the company of the world’s top art critics, and then describe what makes great works of art—ones with which most people are not familiar—great.

If you can imagine all that, then you would be Philippe de Montebello, for decades the Director of the Metropolitan Museum of Art, talking about your favorite works on visits to Florence, Madrid, New York, and other delightful locales.

Your conversation partner would be Martin Gayford, art critic and author, and together, on someone’s dime, you would be crisscrossing the planet in search of great works to describe in a book.

That book would be Rendez-vous with Art, which consists of edited conversations between the two friends in galleries and in their living rooms via Skype.

The book raises fundamental, fascinating questions about art that typically aren’t raised elsewhere. How important is it to see a place of art in the place where it was created? What changed when museums took hold and artists began to create pieces for museums instead of churches or private homes? What good is going to the part of a museum where icons like the Mona Lisa and the Venus de Milo reside when you can barely get close to the artworks because of the scrum of humanity packing in behind guides, flashing their cell phones to take pictures as if doing so were some sort of religious ritual?

de Montebello offers fascinating new takes on well-known artists like Titian, Velasquez, Goya, and Rubens, and he also introduces readers to far less known and anonymous artists. The pieces they examine range from familiar works of European painting to distinctly unfamiliar sculptures from Cambodia, Northern Iraq, Babylon, and other locales. Once you experience art the way de Montebello does, you will never look at a painting, a sculpture, or even a museum visit the same way.

The narration can get a little precious at times, such as when Gayford tells us specific things about de Montebello that we don’t necessarily need to know. That he is “almost a perfectly transatlantic person,” whatever that might mean. That his back hurts and therefore they need to leave the Louvre. Or maybe I’m being churlish.

My favorite moment of the book describes de Montebello’s purchase of the Duccio Madonna, a small painting from the late thirteenth century that if you or I passed by it in a museum on our way to the Monets or the Mona Lisa, we would scarcely have given it a second look. de Montebello spent roughly $45 million for the piece after having literally held it in his hands for an hour.

What went through his mind in that hour? He says that as director, he had to wear a number of different hats all at once. He had to be an informed art lover, admiring the beauty of the work. As an art historian, he needed to recognize the fact that this painting marked “the transition from medieval to Renaissance image making. It represented a key moment, a break from hieratic Byzantine models to a more gentle humanity.”

He also had to decide whether to raise the $45 million that the painting demanded. de Montebello again: “First and foremost were the old-fashioned notions of quality, craft and skill. Did the work sing?  Did it stop me in my tracks and did it then hold my attention? Was I reluctant to turn away from it too quickly?”

He also needed to be concerned with the “physicality” of the work—it’s lasted 700 years. How much longer would it survive in a museum? And then, how do you determine its ownership history or providence? How do you know it’s legitimate?  Finally came the competitive instinct—the Louvre wanted this piece as well, or one by this same artist, and since few come to market, de Montebello knew he had to make a quick offer and a high one.

That’s the sort of fascinating insight you discover in de Montebello and Gayford’s Rendez-vous with Art. If you can’t devote the next 30 years of your life to running the Metropolitan Museum of Art, but you do have a hunger to learn more about artists and works of art with which you may never have come in contact before, then you might want to read this book. If it doesn’t want to make you drop what you’re doing and visit the nearest museum, then face the facts: you’re a Philistine, and there’s no hope for you.

That doesn’t make you a bad person, but that’s just how it is.