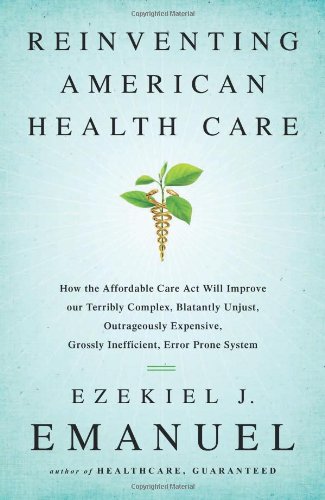 “Obamacare, as Emmanuel points out, has already cost the Democrats their veto-proof majority in the senate, and could well cost them control of Congress in the coming midterm elections. Voting out the Democrats and reversing the more odious parts of this unfortunate law is by far the best Rx for a healthcare system the government seems intent on bringing to its knees.”

Thirty years ago, playwright Wendy Wasserstein left a pair of tickets for the opening night performance of her Broadway play, The Heidi Chronicles, at the box office for her brother, leading investment banker Bruce Wasserstein.

“Can’t make it,” he informed her. “I’m taking over Nabisco.”

Back then, everybody wanted to know what the Wasserstein parents had served their kids for breakfast since they had both risen to such astonishing heights of success.

Now come the brothers Emmanuel, foul-mouthed Rahm, formerly Obama’s chief of staff and currently the mayor of Chicago, and his brother Ezekiel, a top healthcare advisor to the president who won the inglorious nickname Dr. Death for his ardent defense of Obamacare.

My guess is that back in the day, Mom and Pop Emmanuel were serving their sons French toast, Belgian waffles, or even Russian caviar—the kind of vittles that turn young boys into European-style socialists when they grow up and get power.

What’s the difference between the Wassersteins and the Emmanuels? The former were arguably contributing to society through culture and finance.  The latter have spent their careers subverting democracy, most recently in the form of the Affordable Care Act, which Ezekiel Emmanuel defends, by turns gallantly and laughably, in his new book, Reinventing Healthcare.

It’s the book that only a policy wonk could love—and a liberal one at that, because it’s half fact and half spin. But what else would you expect from someone who has spent that much time around our current president?

The first part of the book begins with a fascinating, if rather wonky, review of the history of American medicine and health insurance. Ezekiel makes a strong case that hospitals, once dumping grounds for the poor, and that insurance companies and doctors, once considered quacks and fakirs, have far too much power in the medical marketplace.

He also demonstrates the opacity and complexity of the current healthcare system, showing that it’s virtually impossible to figure out just how much anything really costs. As he describes the system, it is a total, hideous, unavailing mess. You come away from the first half of the book thinking that somebody ought to do something.

Unfortunately, somebody did. Specifically, Obama shoved through Congress, as we all know, a bill of almost 1,000 pages, of which then-House Speaker Nancy Pelosi famously and depressingly said, “If you want to know what’s in the bill, you have to pass it.”

To which a surgeon replied, “The only other situation where you have to pass something to see what’s inside it is a stool sample.”

The comparison is not entirely out of line. In his book, Ezekiel explains how Obama and his advisors borrowed Lyndon Johnson’s strategy for passing legislation: Move so quickly that the opponent doesn’t have time to mobilize.

Ezekiel, of course, has to be aware of the blatant disregard his side had for the democratic process. When it came to subverting democracy in search of a greater good as defined by the government, not the people, the end abundantly justified the means. The last people who tried that approach were Lenin, Trotsky, and Stalin, and look how well that turned out.

The second half of Reinventing Healthcare seeks to justify what Obama did. The problem is that nobody seemed to care how wrong it was to fix a broken system with a program that gave the government sweeping control over 18 percent of the total economy, which is what healthcare represents.

Ezekiel describes earlier attempts at healthcare reform throughout the previous hundred years, where, sadly, one side or the other was opposed, leaving us with the mess we’re in. Somehow the fact that Democrats and Republicans have been on board at some point in history for some sort of healthcare reform justified, in the thinking of the White House, essentially not a reform but a coup.

It’s not the business of the federal government to pick winners and losers in the economy. And yet Ezekiel is quite clear whom the government thinks should come out on the bottom: hospitals and insurance companies. There’s a strong case to be made that hospitals have too much power and are unaccountable, overly expensive, and themselves the cause of suffering and even death due to their own incompetence. And it’s hard to find anyone who will stand up and cheer for insurance companies.

But is it really the business of the federal government to avowedly put insurers as we know them out of business? Or dictate the role of hospitals and healthcare going forward?

Did I just hear that right? The federal government has the right to destroy, or at a minimum transform beyond recognition, an industry it doesn’t like? If that’s the case, then where does it end? Do we really want a dirigiste regime telling us not just which companies should be winners and losers (cf., Solyndra), but entire industries?

On a gut level, Americans understand that it’s just not right for the federal government to dictate to the free market what industries, like insurance, or even what individual companies, like Solyndra, should thrive. Americans voted for Obama to lead the country, not to play God in the marketplace. That’s why the Affordable Care Act currently enjoys only a 26 percent approval rating, and that’s also why the president has some of the lowest approval ratings in the history of presidential approval ratings.

After his highly successful speech at the 2004 Democratic National Convention in Boston, Obama told his supporters, “I’m LeBron, baby.” In reality, he’s not LeBron. He’s Kobe, taking over the game when all appears lost, rendering his teammates into helpless bystanders, and turning failure into disaster. In that sense, the Affordable Care Act is a fitting metaphor for his entire administration.

Ezekiel repeatedly sheds bitter tears over the botched rollout of healthcare.gov, giving the reader the impression that if only the website had worked fine, so would the rest of Obamacare. But it’s not just the website, Zeke. It’s the whole thing. It’s the idea that a bill almost 1,000 pages long could be shoved down the throats of the American public, an anti-democratic act foisted by the democrats. Emmanuel should be ashamed of his role in its passage, but instead he seems quite proud.

Obamacare, as Emmanuel points out, has already cost the Democrats their veto-proof majority in the senate, and could well cost them control of Congress in the coming midterm elections. Voting out the Democrats and reversing the more odious parts of this unfortunate law is by far the best Rx for a healthcare system the government seems intent on bringing to its knees.