The Regional Office is Under Attack!: A Novel 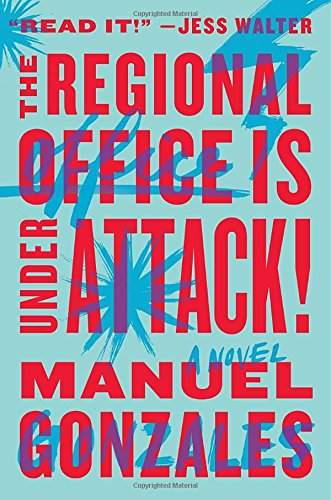 The Regional Office is one part pre-crime from Minority Report, one part Division from La Femme Nikita, and a smattering of mostly off-stage scifi and fantasy. It's a puzzle that's unraveled as the book recounts the fall of the Office and the history of the people who both defend it and try to destroy it. There's not a whole lot of answers in the end, but it’s a wild ride getting there.

Rose is recruited at 16 to take down the Office, trained by one of the Office's own top Operatives and their recruitment lead. Sarah is taken in by the Office not as an Operative, but as a client, they claim, to help her find out what happened to her missing mother.

As these two are fighting on either side of the conflict—Rose with magical invulnerability and a bad attitude, Sarah with a robot arm and a thirst for vengeance—the chapters alternate with the attack and how they got there. It makes for a story that is not precisely linear, but also not random: more like colinear, with several linked storylines unfolding in parallel throughout the book.

But the structure doesn't stop there. There is also a paper about the fall of the Office scattered between chapters, and a first-hand recounting of the central hostage situation at the center of the story. It's an odd one, but a generally well-handled one, a book in love with everything from assassin-based thrillers to comic-book superhero stories. If The Regional Office Is Under Attack! had been only that, it would have been enjoyable fluff, but there's a core of something deeper here, too.

The Regional Office Is Under Attack! is a collection of people who are all missing something or have lost something. It's a group of people who find themselves with missions they always suspected they needed, but find aren't what they wanted. The people in charge lose track of their goals and drift further and further from their purpose. The people on the ground rarely know all the facts of what they're doing or why.

There are hints that everything may have been orchestrated by powers behind the scenes. The book goes to great lengths to show how things that happened early in each of the character’s lives ripple out and contribute to both sides of the conflict, and how the attack on the Office doesn't stop the ripples from going. In fact, it creates other ones. Weirder ones. The book as a whole, in fact, gets weirder as it goes.

The Regional Office Is Under Attack! is a hard one to pin down. It's gleefully pulling from a lot of different pop cultural ideas, and playing with their conventions in interesting ways. That glee carries a lot of the story, an enthusiasm for the parts it's playing with.

Gonzales seems to be aware of the history of the genres he pulls from, and his savviness makes it fun to read. It's also very fond of swearing and run-on sentences, is very much written the way people talk that can be circular sometimes, is sort of bizarrely fatalistic, and is told in a mix of styles that is sometimes confusing. Most of the things that turn out positively aren't really very positive after all, but it's unclear whether that is the point of the story or a side effect of how it's told.

There are aspects of the world that would have been very exciting to see—the super-hero aspects for one, or the mentioned, but never seen, interdimensional struggles against powerful warlocks. The story, however, sticks almost exclusively with the people who don't fit in that world—Sarah in the office, Rose brought on secretly by defectors. And so those more specific aspects are left as half-mentions and historical footnotes, and the story itself is smaller, and a little dissatisfying, much like the characters.

In the end, it's unsure whether taking down the Office was an act of good against bad, or if it was just a bizarre retaliation. The characters are not precisely sympathetic, but we know very well why they do things by the end, and it makes them understandable, even if it's also doing the slipstream trick of making the understandable strange and alien.

As an experiment in styles, The Regional Office Is Under Attack! Is very well done. The parts all feel tight and in control. But the whole is a book that is hard to classify, which will make it either adored or very much not. It's fun, it's well paced, it's exciting and strange, but it's also strangely inconclusive. Either way, it's an adventure.