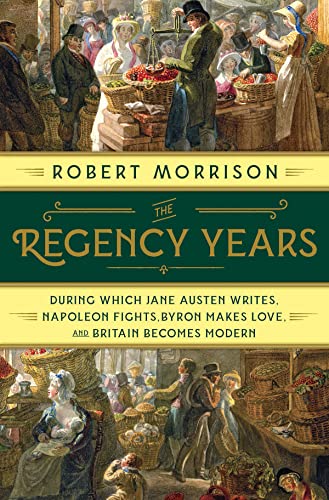 "The Regency Years reads like a romance novel of its period without the novel but makes an entertaining nonfiction read with superior prose and dialogue."

Author Robert Morrison finds exploring the world of the Jane Austin novels, it's Regent, crime, pursuit of freedom, entertainment, sex, empire building etc., "complicated and exhilarating work." "Despite the wealth of interest, this book is the first in more than three decades to focus solely on the Regency years."

The name refers to the British Empire from February 5, 1811, when the "desolate eldest son" Prince of Wales George became Prince Regent (ruler) in place of King George III, "who suffered from sort of insanity." It ended on January 29, 1820 with the king's death. Although brief, the period included "the Luddite Riots and the War of 1812 to the Battle of Waterloo, the explosion of Mount Tambora and the Peterloo Massacre."

Morrison writes "I believe the Regency is perhaps the most extraordinary decade in all of British history." It did become a golden age of British athletes, artists, engineers, explorers, inventors, journalists, novelists, poets, reformers, and scientists, the products of radical change. The Regency period also molded the next generation of leaders in so many fields.

Although "widely despised and too often oblivious in matters of state," the Regent still "in matters of taste and style left a profound impact on his era." "He embodied many of the extremes that have come to define his Regency" including "unabashed revelry of promiscuity and pornographic obsession." "His cultural, aesthetic, and literary judgements have proven remarkably sound," however. Morrison devotes a chapter to him.

The Regency Years reads like a romance novel of its period without the novel but makes an entertaining nonfiction read with superior prose and dialogue. "Contemporary assessments of it [crime of the period] are marred by exaggeration, extenuating, and denial" as, for example, reflected in the period writings. That chapter goes on to also cover punishment and social upheaval.

Remarkably, each of the areas discussed in The Regency Years follows the same themes of upheaval by change, government oppression, public resistance, economics, Dickens/Hugo type real life characters, etc. Reality proved no less entertaining than the fiction of the time.

The extensive chapter on "Theaters of Entertainment," for example, includes much more than the novels"at the heart of the Regency culture" and "museums, menageries, and panoramas." Fairs had "singers and musicians," "food, drink, gambling, and several amusements designed specifically for children." It "featured acrobats, pugilists, wrestlers, singers, musicians, actors, puppets, rope dancers, and much else."

Sports also finds space in the same chapter. Morrison even discusses how the "bloodier sports pastimes" played "a crucial role . . . in many people's lives." The public enjoyed bullbaiting, "cock fighting and badger-baiting." For the upper class, gluttony became entertainment with food and alcohol "consumed in jaw-dropping amounts." Sex is an entire chapter of The Regency Years.

The Regency Years also has a chapter on the Duke of Wellington who knew "what an unleashed Napoleon meant, personally, nationally, and internationally." The duke became wildly popular with the public from his victories in Spain. Waterloo became a tourist attraction. While his army could loot the countryside, Wellington "put his stamp on his army" in "enhanced discipline, training, organization, and morale."

This chapter also includes the less popular War of 1812 with the United States. After that epic story, the author goes on to tell how "tens of thousands of men, women, and children left Britain" as tourists, "missionaries, philanthropists, entrepreneurs, mercenaries, fortune hunters, and empire builders," with Lord Byron as the most famous example.

"Expanding Empire Waging War" includes the British East India Company, the Elgin Marbles, India, the slave trade, and opium. The last chapter deals with the consequences of the Regency era and its "unstoppable momentum" of "modernity" in London and Edinburgh even as it "was transforming the countryside a well."

The Regency Years includes appropriate annotation and an extensive bibliography.