Refuse to Be Done: How to Write and Rewrite a Novel in Three Drafts 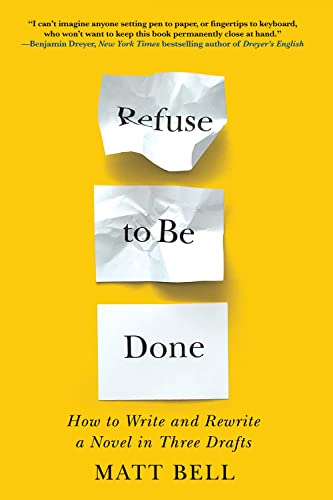 “Bell’s sage advice holds for a range of writers, not just novelists. Writers of short stories, essays or long-form nonfiction, memoirs, or even hybrid or non-traditional forms will gain the hands-on skills to push both the work and its creator beyond what was initially believed possible.”

Refuse to Be Done is not a manual for how to write a novel but how to finish writing one. It’s a subtle difference, but a crucial one. Author of three award-winning books, Matt Bell assumes his readers have run the rounds of writing classes, writing conferences, writing graduate or certificate programs, writing listservs, and the rest of a seemingly omnipresent industry that exists to propel a would-be-writer to get a pen moving on a page.

Bell, on the other hand, assumes his readers know plot from point of view, scene from summary, and theme from tempo. His reader has a commitment to write a novel, or has started one, but now confronts the dizzying miasma of fear, self-doubt, loneliness, and confusion that rears when the bright idea of writing a brilliant novel is shadowed by the daunting and daily task of writing a good one.

To these writers, Bell offers hard-won compassion, faith, and experience: “Even if you only rarely advance in a straight line, even if you do so most often by retreating and trying again, even if you go forward by steps so tiny you find it hard to believe you’ll ever arrive at a full draft of your novel—as long as you keep writing, you’ll make it.”

Refuse to be Done details the “actionable steps” of a three-part process of generating a first draft, revising it on the macro level through outlines and other analysis, and finally, (“Refuse. Refuse to be done. Just a little longer.”) perfecting the prose at the paragraph, sentence, and word level. A (very) short list of tried-and-true tactics that lead to a finished novel include having a working title as an organizing strategy, formatting Word docs so a work-in-progress mirrors a published novel, using spreadsheets to track progress, varying scenes, timelines, and time of narration, and much more on nearly every page.

Yet nothing in Refuse to be Done reduces to a simple formula. Whimsy and discovery abound, or as Bell says, “efficiency isn’t the goal; a great book is the goal. And the path to a great book is often winding and unclear, involving as much back-tracking as it does clear progress . . . walk the croaked road you’re on, believing all the while that it’ll eventually lead you home.”

There’s no avoiding the hard, sustained work that leads to good writing. But there are few greater joys than seeing a beautiful story emerge from rough notes and rambling drafts. Bell knows this, and he wants other writers to know it as well: “Every time I reach the point where I’ve truly taken a novel as far as I can on my own, I feel simultaneously exhausted and elated, and maybe even shocked. I imagine you will, too. Take some time to soak in these feelings before you do anything else. Through an incredible expenditure of effort and imagination and persistence, you’ve earned this moment. You deserve to bask in its glow.”

Bell’s sage advice holds for a range of writers, not just novelists. Writers of short stories, essays or long-form nonfiction, memoirs, or even hybrid or non-traditional forms will gain the hands-on skills to push both the work and its creator beyond what was initially believed possible. Reading Refuse to Be Done, and putting its wisdom on the page, will result in a finished work and a better writer.