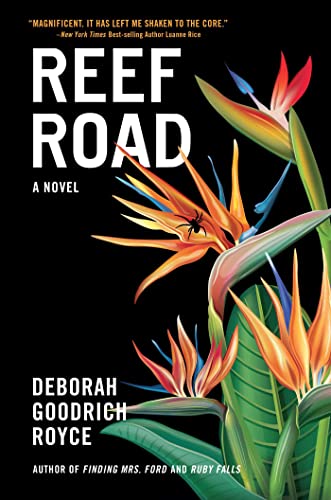 Author Deborah Goodrich Royce’s psychological thriller Reef Road hits the high notes of suspense with breathtaking sleight of hand, building as it unfolds in alternating chapters written in two tenses like puzzle pieces that keep the reader on their toes.

The story is one-part true crime detective novel that reads like creative nonfiction concerning a decades’ old unsolved murder, and one-part literary thriller involving a woman enmeshed in a self-created chain of events now careening out of hand. Reef Road seamlessly weaves two storylines while suspensefully delaying their linkage, oscillating with a slow burn between what is perceived at face value and what really happened.

The story opens in media res, under the prologue’s heading The Wife. It is May 2020, in the advent of Covid-19’s lockdown, when two boys find a disembodied hand washed up on Palm Beach, Florida’s sand. When the boys alert the authorities, so begins Reef Road’s harrowing backstory that leads to that severed hand.

An unspecified voice under the heading A Writer’s Thoughts narrates intermittingly throughout Reef Road. The writer researches the 1948 Pittsburg death of 12-year-old Noelle Huber, whose murder to date remains unsolved. Now living abjectly alone in Palm Beach with an aged dog named Cordie, the decidedly peculiar writer has personal interest in the case and reports, “I grew up under the shadow of a dead girl—a girl I had never met, whose family had not heard of me, a family I would not know if I passed them on the street, nor would they, in turn, know me.” The weight of the dead girl’s shadow is due to the writer’s neurotic mother, once a close, childhood friend of Noelle Huber’s, who remained indelibly scarred by her murder in such a way that made her exceedingly nervous and cast a pall on the writer’s childhood.

Investigating decades’ old evidence, the writer’s feelings are complicated by residual resentment associated with the case. In speaking of the damage incurred from growing up with her paranoid mother in a small town on the outskirts of Pittsburg, the writer says, “My mother’s imprint of her friend’s murder was that of the twelve-year-old child she’d been at the time. A large part of her was frozen in 1948.”

In addressing what it was like to grow up with a damaged mother, the writer says, “I didn’t want to have that kind of mother. I did not want to be that kid. I did not want to come from the family I did, with some string attaching us all to a dead girl.” In explaining what clearly becomes an unhealthy obsession with Noelle Huber’s murder, the writer says, “A single act of violence does not end. Noelle Grace Huber was murdered seventy-two years ago this year, but, for me—for others like me—it never ends.”

Linda Alonzo does not speak Spanish. Married to a prosperous Argentinian named Miguel Alonzo, she is the mother of two young children who grew up in Pittsburgh and now lives in the tony section of Palm Beach’s Reef Road. The marriage is difficult, and with regard to Miguel, “Linda increasingly chafed under the yoke of his control.” Yet the perks of the marriage outweigh the obvious. “Linda and Miguel were walking the edge, all right. The edge of what, precisely, she did not know.”

Diego Alonzo is presumed dead. The elder brother of Miguel, his last known whereabouts was in the mountains of Bolivia decades prior, after he fled another fight with his mother, before all lines of communication went dead. In the dark of night, the mysterious Diego manifests at the Alonzo’s Reef Road front door, and ushers in familial upheaval complicated by the constraints of the Covid-19 pandemic, making his visit protracted, adding chaos to Linda and Miguel’s fragile marriage, and leading to an inciting incident in the tumultuous story: “At eleven a.m. on a Sunday morning, Linda picked up the phone to call the police and report her family missing. Why she had not called the cops, the day it had actually happened was an act of omission that would come back to haunt her.”

The exciting, page-turning intelligence of Reef Road cannot be overstated. The clever story will please lovers of mystery, crime, and thriller genres. Author Deborah Goodrich Royce handles the balance of Reef Road’s off-kilter story with a magnificent, firm grip. The novel is rife with uncanny connections and flawed main characters with hidden agendas. It’s tense with secondary characters, whose impacts are stunning, as events ricochet in a series of strange chain-reactions sprung from perfectly timed twists you’ll never see coming.