The Red Widow: The Scandal that Shook Paris and the Woman Behind it All 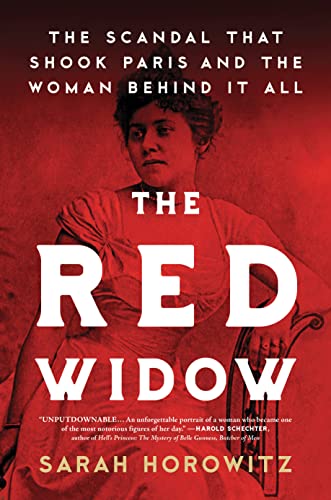 “Horowitz has pieced together a fascinating story of a woman who ‘lied all her life’ and died in 1954 at the age of 86 in a Hove nursing home, taking her secrets with her.”

The scandal of the subtitle is the discovery at home in Paris in May 1908 of the apparently murdered bodies of the husband and mother of Marguerite “Meg” Steinheil (later styled the “Red Widow” for her part in the case). Meg herself, the only survivor and witness to the event, was found by police and detectives one floor below, loosely tied to her bed by “individual toes.” In support of this very detailed account Sarah Horowitz provides photographs of the corpses in situ; the crime scenes after their removal showing that nothing had been ransacked; and a detailed floor plan of the marital home. Meg ingeniously began to weave a web of suspicion, using all the media and networks at her disposal, around whatever suspects came to hand; her artist husband’s “redheaded Italian model”; the family valet, Remy; and the inexplicably loyal housekeeper, Mariette, who had covered for Meg’s rackety private life for decades; and last but not least a couple of unfortunate “levites.”

While Meg’s explanations, feeding into a variety of social prejudices, were generally regarded by the police as fiction, the murder was never solved. Meg or one of her many high society lovers were prime suspects though nothing could be proved. Meg was arrested and imprisoned in Saint-Lazare, a notorious woman’s prison, where happily social hierarchies were still respected, and she was given one of the nicer cells to herself.

“The press described Faure’s and Meg’s last encounter in endless detail discussing his use of aphrodisiacs and rumours that she left her corset behind when she fled the Elysée Palace.” The left-leaning press rejoiced in Meg’s precipitous tumble down the social ladder and moralized about the immorality of “the highest in the land.” Although to many of the general public Meg’s life offered comforting proof that France was still run by powerful and (importantly) virile men. “This was one of the messages of the Steinheil Affair that heterosexual desire defined France. It was an inescapable element of the political system, of the courts, of high society, and of everyday life. Sure, it could lead to corruption but at least its women were sexy and its men lusty.”

Meg’s representation of herself at her trial was a dramatic tour de force of “lawyering and orating” that few had anticipated, showing intellectual and presentational skills that had previously been deployed in pursuit of her social and sexual agenda. Horowitz also shows that some feminist journalists tried then to present the Red Widow as a feminist icon, though that required turning a large number of blind eyes.

Meg ended her life as the widow of the sixth Baron Abinger (who had fallen in love with her during the trial), in the highly respectable seaside town of Hove, U.K. A photo shows her at a Hove party in 1938, in her tiara and fur stole, still able to draw the attention of a male guest in white tie and tails.

The early chapters of this book inevitably perhaps, by comparison, have some longueurs—as indeed they probably had for Meg! She came from a middle class, provincial family, and was on the evidence of the photographs not a spectacular beauty. Her life was dedicated to manipulation and connivance in order to climb socially, to survive financially, and to remain respectable. There is little evidence of daughterly or maternal affection, and very few vignettes that give us insights beyond the machinations, but a few can be noted, among them: her father’s teaching her to walk upstairs seductively (“anyone can go down steps without being ridiculous but to go up a staircase, that’s another matter . . .”);her belated recognition in Saint-Lazare prison that the privileged life she had previously led was built on the pain of others; and her establishment of a factory in the U.K. during the First World War to make food for the troops.

Horowitz has pieced together a fascinating story of a woman who “lied all her life” and died in 1954 at the age of 86 in a Hove nursing home, taking her secrets with her.