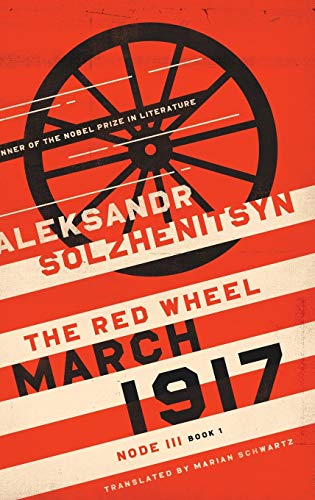 October–November 2017 marks the 100th anniversary of the Bolshevik coup d’etat that brought communism to power in Russia. The roots of this momentous event are traceable to Russia’s entry into the First World War and, more immediately, to the March 1917 revolution that ended more than 300 years of Romanov rule.

March 1917 is the third “node” of the famed Russian writer and former Soviet dissident Aleksandr Solzhenitsyn’s epic examination of the pivotal events leading up to the Bolshevik seizure of power called The Red Wheel, the English translation of which has recently been published by University of Notre Dame Press.

Solzhenitsyn died nearly a decade ago, and is most remembered for his three-volume exploration of the brutal and murderous Soviet slave-labor camp system, The Gulag Archipelago. But he considered The Red Wheel the most important of his books.

Solzhenitsyn chose to present the narrative in nodes because, he explained, “it would be impossible to describe this many events and this many characters over such a lengthy stretch of time.” Solzhenitsyn’s nodes narrate “short segments of time, of two or three weeks duration, where the most vivid events unfold, or else where the decisive causes of future events are formed.”

The first node, August 1914, appeared in English in the early 1970s, and was later updated and expanded by Solzhenitsyn. It focused on the pre-war premiership of Pyotr Stolypin and the disastrous (for Russia) Battle of Tannenberg in East Prussia during the last week of August 1914.

The second node, November 1916, appeared in English in 1999, and in a thousand pages covers the period from October 27 to November 17, 1916. Solzhenitsyn explained that he chose that discreet time period because “it encapsulates the stagnant and oppressive atmosphere of the months immediately preceding the Revolution.”

March 1917 is one of three books that comprise node III, and in 631 pages covers the events from March 8–12, 1917. Tsar Nicholas II’s government was under siege. Russia was losing the war against Germany. Food was often scarce.

Solzhenitsyn vividly describes the fall of St. Petersburg, Russia’s capital, street by street, to unruly and largely unorganized rebels. The military and the police mostly refused to shoot the mobs, and some eventually joined the revolution. Several government buildings were raided and set on fire.

The Tsar was away at military general headquarters in Mogilev, “commanding” the war effort. His ministers in St. Petersburg were confused, sometimes uninformed, and indecisive. Solzhenitsyn writes that Prince Golitsyn, the prime minister, “was utterly lacking in any instinct for power.”

The author decries the ineptitude and ineffectualness of the Tsar’s government and its ministers:

“In this government, which had changed so many times over the course of the war, changed and changed again, to the point of a loss of confidence, a loss of significance for each, and in which one half, including the Prime Minister, thought of nothing but how to get out of his position, what could they ever hope for? Moderation, consensus, the passage of time? Was there so much as a tiny cube of genuine struggle left in these twelve breasts?”

“The disorders had dragged on,” Solzhenitsyn explains, “because the authorities wanted to avoid bloodshed.” Foreshadowing the future civil war and rule of the communists, the author notes that “horror and bloodshed is deceptive. If the moment was let slip, the streams shed would be incomparably greater, even seas of blood.” “Only the resolve not to be daunted by a few victims,” he writes, “could stop this instability.”

Meanwhile, the leaders of the Duma—Rodzyanko, Kerensky, Milyukov—maneuvered to assume power if the Tsar’s government did not survive. Bolsheviks and Mensheviks also plotted to seize power.

The Tsar seemed oblivious to it all. “Emperor, Emperor,” Solzhenitsyn writes, “[w]hy have you cut yourself off so? Why have you buried yourself in your Mogilev silence?”

The book ends with the imperial government on the precipice. The Duma’s leaders formed a Provisional Committee to restore order. They are opposed by the Soviet of Workers’ Deputies whose goal, the author writes, was to “force the bourgeoisie to seize power” from the Tsar, but “behind the bourgeoisie’s back make sure this power did not become real.”

Solzhenitsyn originally planned to extend The Red Wheel to 1922, with the communist victory in the Russian Civil War. Instead, Solzhenitsyn ended his magisterial work in April 1917, after the Romanov dynasty falls but before the Bolshevik coup. Perhaps he just ran out of time. But he told one biographer that ending the story at April 1917 was sufficient because the March revolution was the main event whose outcome determined Russia’s 20th century history.

Solzhenitsyn’s best biographer, Michael Scammell, has noted that The Red Wheel fulfilled the goal that the great Russian writer prescribed for writers in his 1970 Nobel lecture. “Literature,” Solzhenitsyn explained, “transmits

. . . condensed experience from generation to generation. In this way, literature becomes the living memory of a nation. It . . . safeguards a nation’s bygone history and  . . . preserves the nation’s soul.”

The Red Wheel and The Gulag Archipelago have been called Solzhenitsyn’s two “cathedrals.” You cannot fully understand the horrors of communism and the history of the 20th century without reading them.