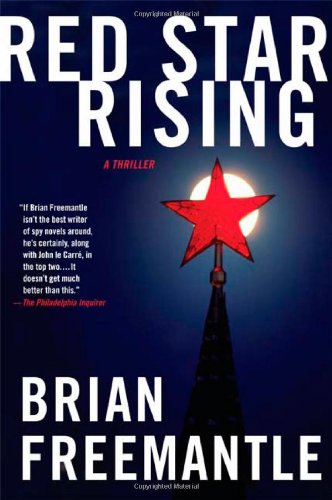 The corpse of a horribly tortured and murdered Russian man is found on the front lawn of the British embassy in Moscow, with an arm missing, fingerprints burned off, and face obliterated by a shot in the head from behind. Russian mob hit? KGB (now FSB) assassination? Mugging gone wrong? London, anxious to avoid an international incident, dispatches veteran MI5 special agent Charlie Muffin to investigate.

Charlie is well-acquainted with the skullduggery of espionage, with a history of intrigue dating to the 1970s. But investigating a murder is something a bit new to him. Crime detection and forensics work is difficult under any circumstances, but this is vastly complicated by the fact that little has changed since the Cold War ended, and British, Russian, and American spies are still engaged in a death-struggle for intelligence and the upper hand, exercising deceit, disinformation and misdirection with as much vigor as in the Soviet era. Evidence is withheld, transported and tainted, witnesses non-existent, and the Russian co-investigators are hardly to be trusted—especially when bugs are found in the British embassy.

Matters are further complicated by bureaucratic infighting and internecine warfare within the British embassy and intelligence community, with a lack of trust and an abundance of maneuvering for power. In addition, there appears to be a traitorous “mole” in-house, providing information leaks where the bugs did not.

The closer he gets to the truth about the identities of the killers and the motive for the murder, Charlie fears for his own life, especially when he begins to learn that the solution to the murder may also uncover a spectacular international incident and an espionage plan in the making for nearly 30 years. He uses all the tricks of “tradecraft” to elude followers, check for intruders in his room, and meet secretly with people unseen.

In particular, he wants desperately to connect with his secretly-married Russian wife Natalia and their young daughter, Sasha, whom he hasn’t seen since being called back to London five years before. He hopes to persuade Natalia—an officer in Russia's FSB intelligence service—to go back with him to London. But she’s reluctant, highly protective of Sasha—and there seems to be another man in her life.

This classic spy novel, which is at once an espionage thriller and a murder mystery, will be most welcomed by fans of Mr. Freemantle who has written 13 previous Charlie Muffin novels dating to 1977. Freemantle is completely at home with the espionage genre and, in the spirit of John Le Carre, provides enough twists and surprises—and technical background—to engage readers unfamiliar with this category.

Mixed into the cloak-and-dagger of the devious spooks is an added layer whereby disinformation and ambition in the Russian media—embodied in the seductive Svetlana Modin—intensifies the mood of mistrust and manipulation. In Russian journalism as in spycraft, “Tell a lie enough times to a big enough audience, and it’ll become the truth,” observes Charlie.

American readers may be distracted by some Britishisms and Mr. Freemantle’s habit of reversing subject-verb in attributions, replacing “said” often with just about anything else: “dismissed Charlie,” “questioned Robertson,” “picked up Charlie.” Americans—a get-to-the-point crowd—may also find the plot dragging here and there, filling pages. Even so, one feels there is a master at work here, methodical as Charlie Muffin himself, a writer for whom fiction—itself an act of deception—is a vehicle to explore the lies we tell about ourselves and our sense of security.

Spies are big now, suddenly appearing across the media, on the big screen and the small: Salt with Angelina Jolie opened late July 2010, and “Covert Affairs” and “Burn Notice” on the USA Network (complete with helpful tradecraft footnotes) get impressive ratings. In the news, ten Russian covert operatives were arrested in the U.S. and traded back to Russia. Vladimir Putin, a former KGB colonel, lavished praise on them (even if they’d accomplished next to nothing except maintain their secrecy so long), especially the sexy redheaded femme fatale, Anna Chapman. Shortly afterward, FBI agents arrested beautician Anna Fermanova for smuggling high-tech night vision equipment to Russia. And late in July, Wikileaks posted online thousands of intelligence reports from ground-level work in Afghanistan, revealing little new, but perhaps endangering Afghan informants and their families by naming names.

Just as in the 60s, when the Damocles’ sword of nuclear obliteration hung over our heads, espionage fiction was a way to engage the fear in a cathartic way, even a funny and dismissive way. Who took “The Man from U.N.C.L.E.” or “The Avengers” seriously? Today, with jihadists eager to kill Westerners by the millions if they could, espionage fiction in various forms is re-emerging as our way of objectifying and containing the fear.

Freemantle’s work bridges these two eras in a way that is smart and complex. He’s lived through both, and perhaps part of his message is that we’ll live through this new era, too—as long as there are Charlie Muffins on the job.