The Red Sea Scrolls: How Ancient Papyri Reveal the Secrets of the Pyramids 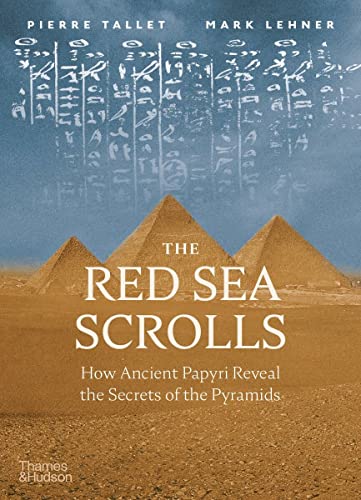 “Absolutely gripping . . . armchair travel and exploration doesn't get any better than this.”

Mark Lehner and Pierre Tallet, both eminent Egyptologists, have teamed up to present Tallet’s remarkable discovery of a trove of ancient papyri, the oldest ever found. The archeological story is absolutely gripping, but even better is the way both archeologists use the information on the papyri to paint a broad picture of ancient Egyptian building and exploration, from copper mining to trade to administration.

One of the first papyri found, an accounts ledger, is shown in a crisp photograph, the ink as fresh as if it had been written yesterday:

“More than just its size, its real significance lay in the fact that the first column featured a specific date in the reign of King Khufu. The text, inscribed in black ink and comprising very careful and detailed hieroglyphic signs, mentioned ‘the year after the 13th census of large and small cattle,’ which can probably be equated with the 26th year of Khufu’s reign.”

Even richer was the next find:

“. . . a logbook filled in by a scribe day by day. It recorded the activities of the team of sailors whom we had already identified in the G2 papyri and the pot-marks. . . . The most important fragments repeatedly referred to Khufu’s funerary complex at Giza and focused on the work of a minor official, an inspector called Merer, who for several months was responsible for transporting limestone blocks to the massive building site around the Great Pyramid. Astonishingly, for the first time, we had the direct written testimony of a contemporary eyewitness who had participated in the construction of the pyramid complex of Khufu.”

The logbook alone is a worthy subject for a book, but there is more here. Chapter by chapter, the authors chart other finds and place them in historical context. Maps, diagrams, and photographs enrich the descriptions, bringing the reader along on their incredible exploration. The reader feels part of the adventure:

“I could not escape the feeling that I was suddenly in direct touch with another person who had stood in the same spot as me and had left behind this rock-cut graffito nearly four thousand years earlier for reasons known only to him.”

It’s a tribute to the writers that from the pages of the book we feel the same intense connection.

Beyond the careful descriptions of the discoveries, the book charts what these finds mean, what they reveal about ancient Egyptian capabilities, interests, and daily life. The high level of exploration along the Red Sea is convincingly conveyed, bringing to vivid life a culture that long has been reduced to only the pyramids. This book shows how much lay behind the building of these amazing monuments, the experimentation with different forms and interior chambers. Anyone who has any curiosity about ancient Egypt will be excited to dive into these pages. Armchair travel and exploration doesn't get any better than this.