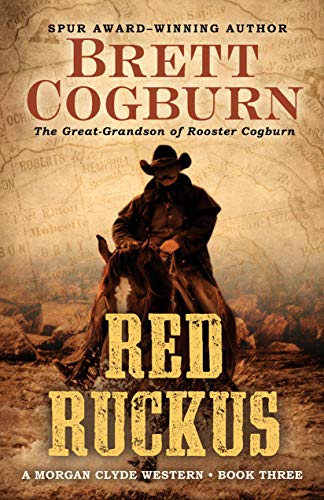 “An escapist read in which the lawmen are the outlaws, and the good guys win.”

It's June 1874 in Denison, Texas, a former railroad construction camp that boasts only one church, but 22 saloons, five dance halls, and too many brothels and bawdy houses to count.

Deputy City Marshal Morgan Clyde is called into action by screams coming from an alley behind a row of tents, and buildings framed and sided with rough-sawn lumber. He arrives to find a crowd of onlookers and a red-faced Methodist preacher watching 80-year-old Mrs. Klein swing a broom and curse at a pack of pigs rampaging through the alley. Well, not exactly rampaging. More like staggering and stumbling after imbibing on the leftover mash seeping from Doug Hogan's still.

". . . their grunting pig talk was more lethargic than anything. The old sow flopped down in the mudhole in front of him and appeared to be about to go to sleep. A smallish black gilt, with a bottle nose two hands long, was so inebriated that when it made a half-hearted attempt at a staggering, weaving trot it fell on its side and didn't get up. Another of the hogs, a young red boar with black spots down its sides, wanted to root under the feed store loading dock, but couldn't seem to figure out that the gap between the porch boards and the ground was too narrow to allow it's bulk to pass. . . ."

Despite his efforts to calm Mrs. Klein, disburse the assemblage, and deflect the swine, Morgan is knocked off his feet by one of the lurching porkers:

". . . He was a man that appreciated good clothes and well-polished quality footwear, and the sight of a forty-dollar pair of fancy, high-topped riding boots ruined with scuffs and gouges was almost worse than the pain of his wounds."

Morgan quits his job but is soon recruited to join a newly established federal law enforcement agency, the United States Secret Service. His mission? Bring to justice a trio of corrupt U. S. Deputy Marshals led by crooked Lot Ingram who, among other things, were selling "protection" and shaking down business owners in a sort of Old West version of modern-day mobsters.

"Molly O'Flanagan's Barbershop was nothing more than a large canvas wall tent with a false front made of painted pine lumber and a couple of glass windows to make it appear as something more than a tent when viewed from the street. . . . A couple of battered chairs and a table mounted with old newspapers opposite from the barber's chair served as a sitting area for customers waiting their turn at a haircut."

But behind a curtain on the back wall is something Red Molly finds more lucrative. A makeshift saloon:

"On one side of the room ran a short countertop of a kind that might be seen in any store, with the wall behind it covered in cubbyholes an cabinets. Two round tables and accompanying chairs took up the rest of the space, and at one of those tables sat four men engaged in a game of poker. . ."

Marshal Lot demands a percentage of the illegal saloon proceeds from Molly, a percentage that he arbitrarily increases without notice. In exchange, he lets her stay in business. When she objects, he threatens her:

"'You'll pay, or I'll burn this place to the ground and haul your wide ass to Judge Story at Fort Smith. How would you like that? . . . '

"Molly took out her cashbox and paid him another ten dollars. . . ."

There's not as much shoot ’em up action as can be found in grittier Western novels, but bullets do fly in a many-pages­–long gunfight toward the end of the book. The author's authentic you-are-there Old West descriptions make up for any perceived lack that devoted Old West readers may expect or prefer. It's an escapist read in which the lawmen are the outlaws, and the good guys win.

According to the book cover, author Brett Cogburn is the great-grandson of Rooster Cogburn. He makes that same claim in a March 2011 online edition of True West magazine, and elsewhere in print. However, that old gunslinger Rooster isn't a real person. He's a fictional character featured in the 1975 John Wayne hit movie titled True Grit, so Brett's bold assertion may or may not be true.