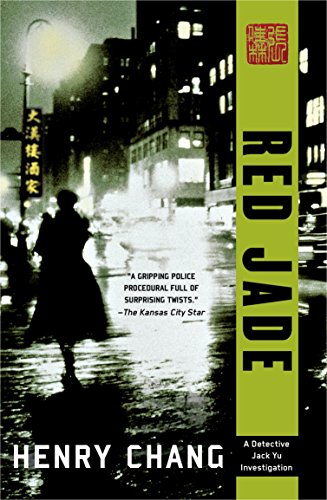 Reading Red Jade by Henry Chang is like going on a diet of tasteless fiber before enjoying a fine helping of spicy Mongolian Beef. The vivid, cinematic ending is literally preceded by a couple of hundred pages written in a dull and plodding style. In fact, make that plodding, plodding, plodding.

The reader will need to take a suspension of reality pill before accepting the story that’s told here. New York Police Detective Jack Yu is an Asian quasi-superhero who can solve multiple crimes—all while spending a weekend in Seattle, Washington. It’s so hard to believe that Yu can solve a murder that took place in New York City’s Chinatown while in Seattle that the author himself asks of Jack, “How much destiny could he take?” Wherever Detective Yu goes the evil people he needs to find just happen to be in the neighborhood.

It may or may not be worth mentioning that the book starts with a bloody murder of a young man and woman in New York’s Chinatown. This precedes Jack’s traveling to Seattle with his sometime girlfriend (she’s there attending a legal conference), where he not only solves the case in chief but another big one while he’s at it. Yes, the world is just a stage for Detective Yu.

One might be tempted to think that there’s going to be some interesting scenery covered in a tale set in Seattle. Instead, except for a few walks on very mean streets, the majority of the tale involves Jack’s stay at the Marriott Courtyard near Sea-Tac, while his girlfriend beds at the far more impressive Westin downtown. Jack has an entire extended weekend to work his magic, which sometimes involves beating up two foes at once using his impressive kung-fu style skills. Sometimes, though, Jack falls back on simply shooting the bad guys when he’s not getting the best of things. Yippee Ki-yay!, as Bruce Willis might say.

Still, credit has to be given to Chang for fashioning a surprisingly energetic and involving ending. It’s a shame it takes one such effort to get to it. This reader felt worn down by the telling, as if the reading took away more energy than it could ever hope to repay. Chang writes in small bits and bites (some chapters covering only a single page), which makes me think his skills might be better applied to short crime stories. Let’s just hope that he comes up with protagonists that are more reality-based than Detective Jack Yu.