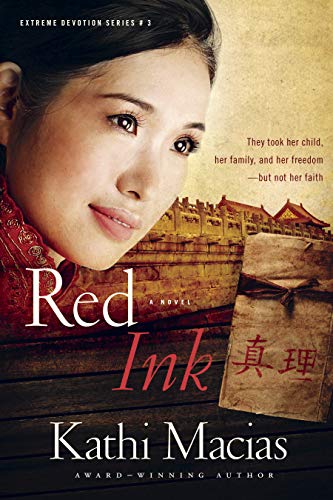 One of the great mysteries of faith is how God does not play favorites with his love. It is not parceled out based on the severity of one’s personal struggles. Instead, it flows throughout the world touching everyone equally.

This phenomenon is explored in Kathi Macias’ Red Ink. From a nursing home to a drug house to a Chinese prison, God is there for all wherever they may be. Another fascinating aspect of the book is its depiction of the power of prayer. It crosses all boundaries and conquers all obstacles. It does not require a person’s name for an intention to be granted. It does not need a defined reason for its influence to be felt. It does not demand reciprocation in order to be acknowledged. All that is necessary is raising one’s heart and mind to God. He takes care of the rest.

Zhen-Li is one of Red Ink’s triumvirate of main characters. She is imprisoned for actively proselytizing her Christian faith against the restrictions set in place by the People’s Republic of China. She is forced to leave behind her husband and young son in order to be “re-educated.” Tai Tong, one of the guards, makes it his personal mission to break her. He will either get her to sign a legal document denying her God or he will force her to become his personal sex slave for the remainder of her 10-year sentence.

Maggie is a disaffected American teenager. Bored with her life and dismissive of her parents, she falls for the false charm and insincere attention of a drug-dealing Lothario. He lowers her inhibitions with his chemical substances and shakes off her hesitation with his physical intimacy. It’s not long before he has complete control over her mind, heart, and body. She is so head-over-heels in love with him that she is unaware of how she is playing right into his carefully laid trap.

Julia is a resident of a nursing home. In her younger days with her husband, she served as a Christian missionary to China. She has carried her faith with her into the twilight of her days. Through divine premonition, she feels compelled to pray for an unknown Chinese woman who she believes is in some kind of trouble. She also prays for Maggie, the wild child granddaughter of one of the residents, whom Julia also believes is in terrible danger. It is through the power of Julia’s devotion that the fates of Zhen-Li and Maggie are decided.

Red Ink is an impressive narrative construction. Ms. Macias masterfully weaves the three stories throughout the entire book. She never falters with pacing, point of view, or plot. The details are expertly drawn together for a satisfying conclusion. At times, the dialogue gets a bit didactic in tone and slightly repetitive in nature. The characters’ words are more palatable when they do not strain to carry the storyline, but instead come from the heart.

A portion of the ending also shifts in style to the melodramatic and the unbelievable. Yet Ms. Macias, without a doubt, successfully illustrates her main themes—of the equality of God’s love and the power of prayer—to her target Christian audience. Overall, Ms. Macias employs a masterful writing style delivering a powerful Christian message.