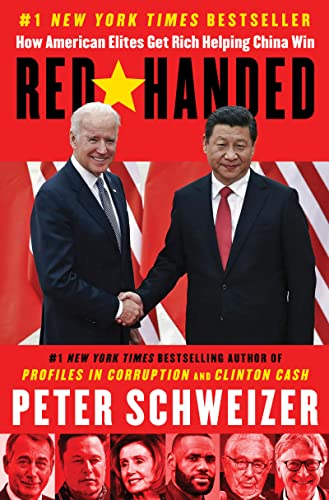 “Schweizer uses his keen eye for detail to explain the many and varied ways that the Chinese Communist Party (CCP) has influenced US elites in ways that benefit China both economically, politically, and militarily.”

During the Cold War, the Soviet Union gained influence within our government at various times through intellectual and government elites who viewed communism as more just and fair than capitalism, and businessmen who viewed the Soviet Union as an untapped market for their products. But Soviet perfidy eventually drove away most intellectuals, and the Soviet market proved to be just a temporary attraction to US businesses, resulting in the decline of Soviet influence.

China in the 1970s and 1980s acted as a de facto ally of the United States in the waning years of the Cold War. And after the fall of the Soviet Union, many US elites continued the policy of “engagement” with China, which they hoped would result in a more open Chinese political system and create a huge market for US goods. The Chinese political system did not open up, but some American elites reaped (and continue to reap) huge financial rewards for continuing engagement with China.

That backdrop is necessary to understand the story told by investigative journalist Peter Schweizer in his new book Red-Handed. Schweizer uses his keen eye for detail to explain the many and varied ways that the Chinese Communist Party (CCP) has influenced US elites in ways that benefit China both economically, politically, and militarily. In a phrase, he follows the money, and provides 80 pages of source notes to support his claims.

And Schweizer’s tale of influence peddling and its policy implications takes no prisoners. He shows how both Democrats and Republicans in the executive and legislative branches of the US government, US businesspersons, and elite American universities (like Yale) have been influenced by China’s money.

Schweizer acknowledges that some of these elites believed that engagement with China would create a more prosperous country (which it did) and a less repressive and militaristic regime (which it didn’t). But China’s domestic repression and external aggression did not affect their views about the need for continued engagement. They were getting richer and richer as a result of their lucrative dealings with China, and Schweizer claims that money colored (and still colors) their policy views.

All of this engagement helped fuel and fund China’s domestic apparatus of repression and the growth of Chinese military power. Schweizer shows that the very same US elites who have financially benefited from engagement with China have often downplayed or excused China’s terrible human rights abuses and China’s geopolitical ambitions.

Schweizer believes that China’s “elite capture” can be fought. He reminds us that the Founding Fathers, including George Washington, Alexander Hamilton, and James Madison, warned the new nation about the dangers of what Washington called the “insidious wiles of foreign influence.” Back then, it was Britain and France we had to worry about. Today it is China.

Schweizer recommends banning lobbying on behalf of Chinese companies that are linked to the PLA and China’s intelligence services; prohibiting military/intelligence-linked Chinese companies from appearing on the US stock exchange; banning joint research by American universities, investors, and corporations with Chinese projects that implicate military and intelligence capabilities; and encouraging shareholder activism to hold company executives to account for nefarious deals with China.

At the beginning of Red-Handed, Schweizer quotes Lenin on the shortsighted greed of businessmen and capitalist governmental leaders: “[T]hey will work on the preparation of their own suicide.” China has risen to become America’s most dangerous international foe, and Schweizer’s book persuasively contends that it was the shortsightedness and greed of many American elites that made this possible.