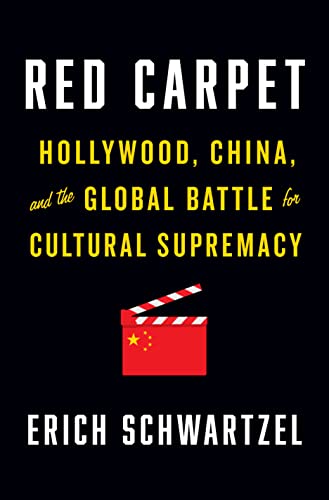 In the 1930s and 1940s, communist influence in Hollywood was at its peak. (Yes, the “Hollywood 10” were communists or communist sympathizers). Communist influence then was mostly ideological and in some cases driven by the fact that the Soviet Union was our wartime ally against the fascists. Today, as Erich Schwartzel documents in his new book Red Carpet, communist influence is largely driven by money—Hollywood moguls have been seduced not by ideology but by the largest market in the world.

That largest market in the world is in China, with more than 1.4 billion people. As China modernized after Mao’s death, its communist leadership began to permit American movies into China’s theaters. It was at first a rather slow process but in the early years of the 21st century Hollywood and Chinese officials reached a tacit agreement: Hollywood movies would be welcomed in China but only if producers and directors and screenwriters acquiesced in Chinese censorship.

And with the rise of Xi Jinping to power in China, Hollywood’s friendly relations with the communist regime, in Schwartzel’s words, “has bolstered China’s campaign for global influence with American movies that either turn every portrayal of the country into a state-sanctioned commercial or avoid anything that challenges how Xi’s party sees the world.”

In China, unlike in the United States, art serves the state. Shwartzel shows how China’s negative reaction to movies such as Seven Years in Tibet and Kundan (movies that portrayed the Dalai Lama in a positive light) started a process whereby China gained “the ability to green-light projects and change scripts like an invisible studio chief” in return for Hollywood’s access to China’s theaters.

Soon, executives from Sony, Disney, DreamWorks, MGM, Paramount, and other American movie companies and their divisions “groveled” before China’s communist leaders, accommodating Chinese censorship, hiring Chinese actors, changing scripts in accordance with China’s dictates. Unlike the 1930s and 1940s, the groveling this time was not ideological—it was all about money and profits.

Hollywood’s top executives, directors, producers—Eisner, Iger, Spielberg, Katzenberg, Renny Harlin, Howard Stringer, and others—made deals with the devil. To break in to the Chinese market, they acceded to China’s demands, which meant that their movies needed to avoid sensitive topics like Tibet and Taiwan, and had to portray China the way Xi wanted it portrayed. Actors like Richard Gere and Brad Pitt were banned from movies to be released in China for unacceptable political remarks.

There would be no movies about the Tiananmen Square Massacre, the genocide of the Uighurs, or about the crackdown in Hong Kong, or about Chinese military threats to Taiwan and aggression in the South China Sea, or about Mao’s terror famine and deadly cultural revolution. No Chinese characters are cast as villains in major American studio releases. And you can bet that no major American studios will make a movie about China’s responsibility for the global pandemic that has killed millions worldwide.

For Hollywood, Schwartzel writes, China was “a place of seemingly limitless revenue and opportunities for cultural exchanges, but also a place fraught with necessary concessions that contradicted the free-speech ideals and the patriotic sheen that had molded the industry since its founding.”

So movies like the remake of Red Dawn and Transformers were produced and scripted in anticipation of China’s concerns. “For the first time since Hollywood’s founding,” Schwartzel explains, “creative decisions at the root level of moviemaking—casting, story lines, and dialogue—were being made with China, not America, first in mind.”

And Schwartzel contends that China’s movie market fast became a “bailout” for Hollywood films that flopped in the United States. China’s box office, he notes, grew larger than the combined box offices of England, Japan, and India. Schwartzel singles out Disney as being the worst groveler to China’s demands, and this was especially true with respect to its Marvel movies.

Schwartzel notes that China has created its own movie industry that promotes Chinese cultural “values” in the countries of Asia and Africa that have signed on to China’s Belt and Road Initiative (BRI). The BRI is part economic and part geopolitical. So Hollywood has indirectly helped China’s cultural propaganda offensive that accompanies its fiscal investments in the BRI.

And Schwartzel also notes that “China’s political priorities have similarly conquered other parts of corporate America as they have the film industry.” He mentions airlines, car companies, and hotel chains that have bowed to China’s political demands for fear of losing their share of the Chinese market. He also could have mentioned China’s successful financial influence peddling in Washington—the subject of Peter Schweizer’s new book Red-Handed. (Reviewed in NYJB).