Red Card: How the U.S. Blew the Whistle on the World's Biggest Sports Scandal 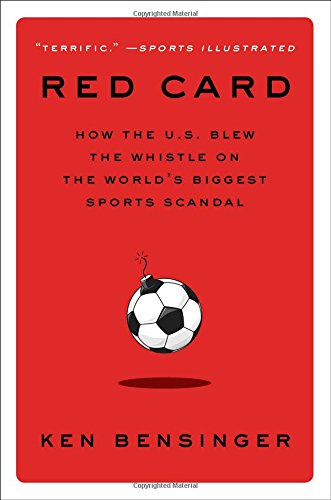 Over the past four decades, international soccer has served as a vehicle for those in charge of it to siphon off hundreds of millions of dollars in under-the-table payments and bribes. While the World Cup was emerging as the planet’s greatest spectator event, those running football worldwide saw it as a means to a financial end and only secondarily a sport.

That is the tale Ken Bensinger has expertly crafted in his painstakingly detailed and fascinating first book Red Card: How the U.S. Blew the Whistle on the World’s Biggest Sports Scandal.

A one-time Pulitzer Prize finalist and now a reporter for Buzz Feed, Bensinger meticulously describes the unfettered—and equally brazen—financial corruption that made FIFA, the organization running the world’s most popular sport, operate more like a mafia (minus the body count) than a governing body.

Red Card opens in August 2011, one year after the Federal Bureau of Investigation began looking into reports of corruption related to FIFA’s awarding the 2018 and 2022 World Cup tournaments to Russia and Qatar. The investigation owed its genesis to information gathered by Christopher Steele, a Soviet expert based in London who had been hired by the British government to keep an eye on that country’s competitors for the 2018 World Cup bid.

Steele, (who since has become famous for later clandestine information-gathering related to the Russians and Donald Trump), had become aware that the Russians were utilizing underhanded tactics to best Britain. The FBI was familiar with Steele, having contacted him while investigating a case involving Russian organized crime in the United States.

The FBI investigation hit a brick wall until an IRS special agent and soccer fanatic in Southern California named Steve Berryman received a Google Alert linking to a Reuters news story about the finances of Chuck Blazer, an American and a high ranking FIFA official with CONCACAF—the arm of FIFA that ran soccer in North and Central America and the Caribbean. Berryman, who quickly discovered that Blazer had never filed income taxes, becomes the hero of Bensinger’s account, portrayed as a tireless sleuth insistent on doing what he can to expose those doing harm to the sport.

Berryman convinced the FBI that he could assist them, especially when it came to tracking money transferred through U.S. banks, and after cornering Blazer the Feds were able to gain his cooperation. Blazer’s greed was breathtaking. Not only did he skim ten percent of any contract with which he had involvement, FIFA paid expenses on Blazer’s personal American Express bill to the tune of more than $26 million dollars, earning him membership rewards equivalent to making more than 200 first class round-trip flights to Europe.

Blazer was far from alone in his profligacy. The resulting trail he led reached the top including FIFA head Sepp Blatter, who resigned. Several who were caught pled guilty and cooperated with the investigation after forfeiting millions in ill-gotten gains. Money was siphoned off at every opportunity—scalping of tickets, bribes paid directly to officials for television and marketing rights, bags of cash in exchange for votes, and billing soccer organizations staggering sums for lavish parties, luxury shopping, first-class travel, and cars, boats and homes around the world.

The book features a colorful and unforgettable cast of characters including the 450-pound Blazer, who transported himself via limousine and a fleet of scooters, sometimes with a parrot perched on his shoulder, while paying $18,000 per month rent in Trump Tower, where he lived with his soap opera actress girlfriend.

There is Blazer’s boss Jack Warner, the Trinidadian head of the Caribbean arm of FIFA, whose insatiable desire for cash and ability to remain beyond the reach of authorities outweighed any emotion he felt at the arrest of his sons for furthering schemes on his behalf.

There is Warner’s Cayman Islands based successor, Jeffrey Webb, who vowed to clean up the mess left in Warner’s wake, only to take bribery and corruption to an entirely new level from his first day in charge.

Corruption was so widespread it becomes clear that Chuck Blazer had not exaggerated when he told investigators that there were two types of soccer officials: those who took bribes and those who paid them.

Bensinger’s narrative provides a fascinating window into IRS and FBI investigative tactics—as well as the influence of geopolitical forces on the cases—and the tactics of prosecutors who eventually bring charges and try the accused. The author walks the reader through the decision to treat the crimes as racketeering, a key moment that opens up myriad prosecutorial possibilities.

Bensinger’s version of the story is incredibly detailed, resulting in a narrative that invariably jumps around a bit in order to provide context, sometimes to a fault—particularly with back stories of characters both major and minor in the telling. At times this results in a less than smooth narrative flow, particularly early in the book, although Bensinger compensates by foreshadowing each new development in a way that makes the reader want to continue.

It should be noted that Bensinger’s purpose here is to lay out a case—in a way the reader can make sense of it—for a scheme complicated in its breadth while brazenly simple in its execution. All this through the eyes of those investigating the corruption. The book is an outstanding prosecutor’s brief, damning in its thoroughness.

That being said, some aspects of the case are more documented than others as nearly all of Bensinger’s primary sources refused to be quoted on the record. Some no doubt refused out of fear of being targeted for prosecution, others were in law enforcement and unable to comment on an active criminal investigation. This necessarily requires an article of faith on the part of the reader. As this is an ongoing case, some lines of inquiry remain open to speculation and/or further investigation.

Bensinger did score some on the record interviews—including a pair with Sepp Blatter—attended the one public trial held to date, and painstakingly reviewed thousands of files including court transcripts, exhibits entered into evidence at trial, and documents held by FIFA.

Despite these highly public revelations, most cases remain unresolved. That raises the issue of whether the book was published prematurely—its release obviously was timed to coincide with the 2018 World Cup. Or perhaps a sequel will be in order once the various criminal cases crawl to their inevitable conclusions. With so much money and national pride at stake, it is anyone’s guess how the investigation progresses from here. And it is not clear that FIFA has cleaned up its act. As the book nears its conclusion, Steve Berryman is beginning an investigation into corruption he suspects within the Asian arm of FIFA. Stay tuned.

Sports author Dennis Snelling is a three-time finalist for the Casey Award for Best Baseball Book of the Year, including for his most recent title, Lefty O'Doul: Baseball's Forgotten Ambassador. He is also a Certified Fraud Examiner and a Chief Business Official for a California school district.