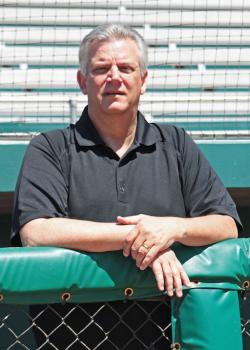 An author of five books, Dennis Snelling is a three-time Casey Award finalist for Best Baseball Book. His first nomination was for his history of the Pacific Coast League, The Greatest Minor League, published in 2011. His next book, Johnny Evers: A Baseball Life, the biography of the great Chicago Cubs star of the early 1900s, was a 2014 Casey Finalist, as well as a finalist for the Seymour Medal for best nonfiction baseball book. His latest book, Lefty O’Doul: Baseball’s Forgotten Ambassador, was runner-up for the 2017 Casey Award. Dennis was a senior writer for Helmar Baseball & Art magazine,”and is currently a columnist for Minor Trips Digest.

Mr. Snelling is a member of the Society for American Baseball Research, the Pacific Coast League Historical Society, and serves as a Chief Business Official for a school district in Northern California. He is also a Certified Fraud Examiner, having earned the certification in 2005. He has served as public address announcer for 45 years, announcing football and basketball for Downey High School in Modesto, California, and was inducted into that school’s Athletic Hall of Fame in 2012.

The Greatest Minor League: A History of the Pacific Coast League, 1903-1957

“It is challenging to balance audience appeal in a book like this. One must please both casual fans and those already familiar with the game’s long history.

Tough Luck: Sid Luckman, Murder Inc., and the Rise of the Modern NFL

“Although interesting and well-written, Tough Luck toggles to and fro throughout, alternating between the worlds of professional football and organized crime, and this approach bet

Here's the Pitch: The Amazing, True, New, and Improved Story of Baseball and Advertising

“The book’s strong point is in its critique of advertising and that industry’s relationship with baseball as a reflection of the changes, for good and bad, in American society.

The Big Fella: Babe Ruth and the World He Created

“The Big Fella is an essential addition to the Babe Ruth canon.

Football for a Buck: The Crazy Rise and Crazier Demise of the USFL

For better or worse, the United States Football League brought us football in the spring, challenge flags, and the two-point conversion after touchdown.

Red Card: How the U.S. Blew the Whistle on the World's Biggest Sports Scandal

Over the past four decades, international soccer has served as a vehicle for those in charge of it to siphon off hundreds of millions of dollars in under-the-table payments and bribes.