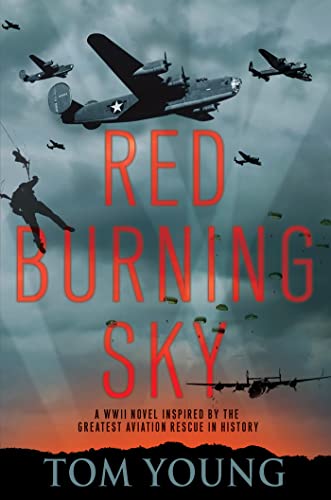 “Fans of warbird aircraft, WWII history, manly adventure, and novels about war and strife in general will all enjoy this novel. Its human focus adds a literary feel. It may resonate more keenly today as a new war erupts in the same general region.”

The best historical fiction provides a “You Are There” experience of a story’s time and place. In this World War II novel about a perilous rescue of American aviators trapped in hostile territory, you are there when . . .

. . . bombardier Bill Bogdonavich’s B-24 Liberator is shot down and his parachute lands him behind enemy lines . . .

. . . bomber pilot Drew Carlton, demoted to stateside instructor pilot after multiple incidents of turning back out of fear, redeems himself by volunteering for a suicide mission . . .

. . . young Chetnik guerilla soldier Vasa Petrovich and his team simultaneously fight the invading Nazis and their own people in a civil war.

These three men thrown together by combat become part of Operation Halyard, a long-classified real mission only recently revealed. It was a top-secret Allied airlift of hundreds of men in jeopardy from the deep rural corners of Yugoslavia, surrounded by German forces.

The story strands weave together through the cycling viewpoints of the three characters. While danger is constant for all of them, the narrative does not rip along at the breathless pace of thrillers. The outcome is already known because the event is historical.

So suspense is built in by the ever-present risk of death faced by the characters. History might have recorded the outcome of Operation Halyard, but the fates of the fictional people involved in it are unknown until the very end of the novel. Which contains plenty of chances for things to go wrong!

As we sweat through the dangers, we share the individual men’s personal experiences and transformations.

Drew Carlton gambles on finding his courage by flying the mission as a pilot of one of the lumbering C-47 transport planes that must land on a hayfield hand-cleared of boulders by the Chetnik guerillas. The first pickup is at night, almost completely blind, and the rest by day, when the defenseless aircraft are sitting ducks to enemy fire.

While Drew is thinking, “Somewhere on this chart could be [his] future crash site, the point where his mortal existence would end. A smoking hole in the ground. A burned spot in the woods that might lie undiscovered for decades and vanish under regrowth of forest”—

—Bill Bogdonavich, on the ground at the rescue site, is thinking: “The pilots of fighters and bombers got all the glory. . . . But you needed a set of brass balls to fly a cargo airplane into a combat zone.”

Bogdonavich is an American of Serbian blood who thought he had left the old country behind. He serves as a translator between the airmen and the guerillas who sacrifice their lives and resources to help the airmen escape. In the process he rediscovers his heritage.

Meanwhile, he’s looking at another aviator and thinking, “His jacket bore the group’s official patch. It showed an armored fist clutching a red bomb, along with the motto Ducit Amor Patriae. Love of Country Leads Me. Bogdonavich liked that sentiment: to take motivation from what you love instead of what you hate.”

Vasa “the Wolf” comes of age through the brutal loss of his family and village and fighting to keep the Germans at bay while the operation develops. He realizes: “Vengeance had its place, but vengeance looked backward. It was about settling scores. Blood for blood. However, the dead don’t know they’ve been avenged. Justice looked forward. Offered hope for a better future. You seek vengeance for yourself, [he] concluded. You seek justice for everyone else.”

As their individual conflicts and challenges unfold, the men give us details of the geography, hardships, and everyday moments. These are conveyed by the author in an active prose style that gives the most mundane details vibrancy. Even simple, passing setting descriptions are loaded with verbs:

“The woods opened to a cleared valley, marked by the rounded cupola of a small Orthodox church. A few homes and barns surrounded the church. A single dirt street anchored the village. Fields and pastures spread beyond it. Sheep dotted one of the pastures. Milk cattle grazed in another.”

Similar phrasing covers the aircraft part of the story (which aviation geeks will relish) along with the logistics of putting the operation together. The narrative gallops along in this lean, direct language, giving the muscular feel of adventure novels and thrillers in a fast, easy read. Throughout, bits of philosophy are inserted, such as, “The most dangerous thing was not a superweapon like a V-1 rocket or a strategic bomber. The most dangerous thing on this bloody, fire-blasted earth was a man with nothing to lose.”

Fans of warbird aircraft, WWII history, manly adventure, and novels about war and strife in general will all enjoy this novel. Its human focus adds a literary feel. It may resonate more keenly today as a new war erupts in the same general region. For those who thankfully are not there, Red Burning Sky will give them a sense of what it’s like, past and present.