The Red Storm: A Mystery 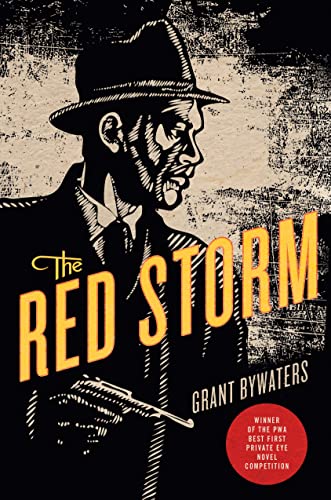 It’s not every day you get a PI book sent to you for reviewing written by an actual authentic-to-the-bone private investigator, so I was really intrigued and looking forward to reading this debut novel, Red Storm, by newcomer Grant Bywaters.

Circa 1930s, Depression-era New Orleans, and private investigator William Fletcher is finding it tougher than most struggling investigators to eke out a living down south, and lure new clientele to his office. Being an ex-boxer—a former heavyweight contender, no less—doesn’t help, but it’s chiefly because he’s a black man in race-obsessed NOLA. White clients spell trouble for him, so he tends to steer clear of them. The Big Easy has become anything but easy for Fletcher, and fighting in the ring wasn’t half as tough as fighting the prevailing prejudices now facing him every day on the streets.

Enter Bill Storm into the public arena. Storm, a ruthless thug from Fletcher’s past spells only one word: trouble.

“When Storm opened the door to his room on the top floor, I could tell he hadn’t slept in days. Dark circles had fashioned themselves around his eyes, but they still lit with hatred and menace.”

Storm offers Fletcher the chance to make easy money. All Fletcher has to do is find Storm’s estranged daughter, Zella. Simple. Of course, simple always turns out to be anything but.

The first time Fletcher met Storm was in New York in the early part of what eventually became known as the Roaring Twenties. Storm was a prominent hoodlum guarding other hoodlums and their interests and rackets. Even back then, Storm was making offers of dodgy work to Fletcher, like guarding a rich high-society couple’s ten-year-old kid, newly kidnapped by Storm. Luckily for the kid, Fletcher had higher morals than Storm, and eventually freed him, much to Storm’s fury.

That was the last time Fletcher had seen Storm, until now, 15 years later with his offer of search and find.

Fletcher, knowing the possibility of inviting trouble for taking on a white client, does so but with great reluctance. Mercifully, after knocking on doors it doesn’t take long for Fletcher to locate Zella who happens to be working as a singer in something her father could easily associate with: a seedy night club.

Zella immediately lets Fletcher know that she has no interest in seeing her father, but before Fletcher can convey that message to Storm, the man himself makes the headlines:

He had been murdered, shot to death. Unfortunately for Fletcher, all those doors he knocked on have set off a catastrophic chain of events that turn the city into a bloody battleground between two rival syndicates, and he soon finds himself caught between the cops and mobsters, one of them a certain psychopath by the name of Sal Mallon.

In what will be a dark twist of fate, and a lesson in life that no good turn goes unpunished, Mallon turns out to the little kid Fletcher rescued from Storm, all those years ago. . . .

The Red Storm is the debut novel from licensed private investigator-turned-novelist Grant Bywaters, and what a debut it is. Fast-paced and action packed, it was the winner of the Minotaur Books/PWA Best First Private Eye, and rightly so. Fletcher is a great creation, one the reader will quickly emphasize with. Told flawlessly in the first person, The Red Storm has Hammett-esque qualities mixing with Elmore Leonard smart-talking bad guys with bad-ass attitudes, guns and punch-power knockouts. Hopefully, it will become a series and we’ll get to see more of PI Fletcher.