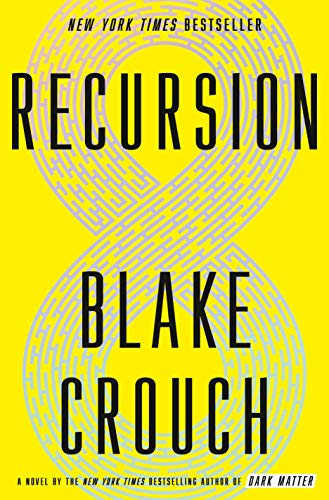 “The core draw of the novel is the complicated love of two people through multiple possible lives and across the gulf of missing memories.”

Recursion is a time travel novel with a unique approach that makes the book more about the personal lives of the main characters than about visiting a previous era. With the invention of a new piece of technology called a memory chair, a person can revisit past events in his life. But memory, it turns out, is more deeply linked with the reality of the universe than anyone expected.

If the user of the chair dies while remembering, he can re-enter that past moment for real, going back in time to that point with a second chance to live those days or years. Doing so alters the history of the entire world, perhaps subtly, perhaps dramatically, depending on the choices of that one person. No one else remembers the first history until the world catches up to the original time. Then, disturbingly, everyone remembers both.

Recursion follows two characters, Helena and Barry, through multiple such lives. Helena, the inventor of the chair, keeps returning to her past to find a way to fix the problems it caused. The more she does, however, the worse things get. She can’t un-invent the chair, because as soon as the timeline catches up, everyone else remembers it.

The novel begins with a mystery: the so-called FMS, or False Memory Syndrome, in which people have full and vivid memories of past lives that never happened. Barry, a police officer, is haunted by a suicide case involving FMS and investigates its origins, which eventually leads him to Helena and the memory chair.

Like The Time Traveler’s Wife by Audrey Niffenegger, in which a time traveler involuntarily returns to past events in his life, this is a personal story, focused on the relationships of the main characters. It speaks to the nature of memory and how people change when they don’t remember their past. It explores the poignancy of sacrifices made in a relationship to address past mistakes.

As Barry says at the end of one such iteration, "I don't know how you carry this weight. But as long as it's on your shoulders, it's also on mine. We will find a way to solve this. If not in the next life, then in the one after. And if not in that one . . ."

In the end, Helena and Barry are trying to save the world, but it’s not really the world the reader is concerned about preserving. The core draw of the novel is the complicated love of two people through multiple possible lives and across the gulf of missing memories.