Record of a Spaceborn Few (Wayfarers) 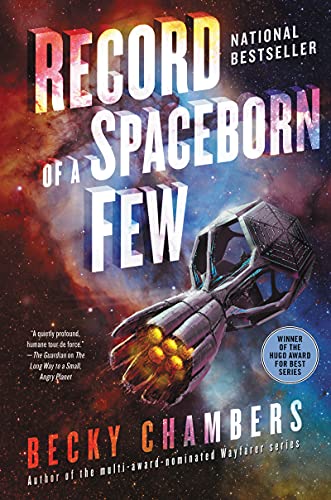 “Chambers’ thoughtful, measured work is offers space opera the depth and complexity it so often lacks. Her work is profound, engaging, and beautifully written.”

As a sub-genre, space opera is generally treated as a tired and over-wrought remnant from an earlier era. In her Wayfarers series, Becky Chambers demonstrates that the field still has enormous potential. Each book quietly realized that potential in a different manner.

The Long Way to a Small, Angry Planet (2016) updated the plucky-crew Firefly model for a readership seeking complex characterization and wide-ranging views of women’s identities and sexuality. A Closed and Common Orbit (2017) tells the more intimate story of Lovelace, the newly-embodied A.I., and Pepper, the oddball engineer who leads her through planetside culture. Record of a Spaceborn Few leaves the crew of the Wayfarer to explore the complex social realities of the Exodan Fleet.

The Fleet has joined the wealthy and technologically-advanced Galactic Commons, in which humans are regarded as primitive and poor. Individual humans now have a choice: remain within their carefully-tended society, where they have enough to meet their needs, but no more, or move into the potentially profitable but dangerous and profoundly unequal galactic free market. The previous two novels traced humans struggling to survive in that free market; Record explores life at home.

This shift allows Chambers not just to change her character focus, but also to take on a challenge that few writers have seriously considered in a century: the fiction potential in utopia. The Exodan Fleet is a series of massive ships in which the last humans fled earth, some nine generations previous. The Fleet operates on profoundly egalitarian principles: “Everybody has a home. Nobody goes hungry.” Its economic and social structures reflect a carefully-maintained communism that has nurtured a fragile species far longer than any of its founders could have hoped.

Chambers’ Fleet is a quiet utopia. All citizens are fed, housed, educated, given meaningful work, treated as equals, provided with health care, and, after they die, carefully composted and returned to the (artificial) eco-system from which they arose. Utopias, historically, make for bad fiction. In a perfect society, what conflict could arise? Most novels in this mode, from Edward Bellamy’s Looking Backward 2000–1887 (1888) onward, have taken a tourist approach: a slightly smug guide offers revelations until the tourist is finally convinced and either joins the perfect society or returns home to evangelize what he has seen.

Chambers instead offers a quiet exploration that reveals subtle character clashes and the ripples that shoot outward from trauma. The Fleet ships are aging; that alone lets bad things happen. The book opens with a young child witnessing one ship’s destruction—not violence, but a terrible accident. That catastrophe adds urgency to each character’s choice: quiet security or the beautiful unknown?

Chambers doesn’t moralize this choice. Both possibilities have value, but no decision is easy. A caretaker for the dead feels deep connection in her work, but little in her daily life. A teenaged boy rages against the limits of a world structed around family. A mother watches her children’s fears of space paralyze them. In the midst of these, an orphaned young man arrives in the Fleet, desperate for a home and security that he has never had.

Accidents happen, but violence lurks, too. Chambers has created a thoughtful, just society, but one populated by flawed characters. Individual greed and cruelty bring pain and even death. Insularity and xenophobia can breed hatred. Chambers suggests that people are ultimately more than just creations of their society. Even a culture of profound care and justice cannot create perfect harmony.

Human decisions can lead to terrible consequences, and all Chambers’ characters are complex and fully-realized. Most, as in her previous books, are female. That gender dominance never feels political or contrived. Rather, those characters allow us to view aspects of a “spaceborn” society that are usually erased by space opera’s traditionally masculine focus. Sexuality, family, child-rearing, social relationships, and cultural continuity are not only women’s issues, but they do involve women. Female perspectives allow a complex social drama that includes private life as well as public.

Chambers’ thoughtful, measured work is offers space opera the depth and complexity it so often lacks. Her work is profound, engaging, and beautifully written.