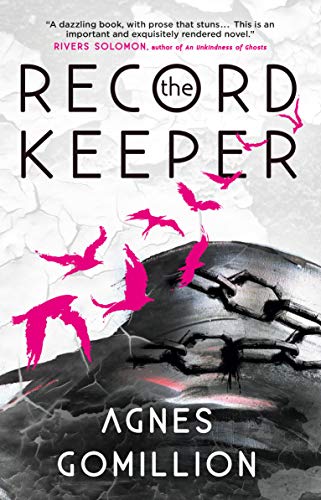 Post-apocalyptic novels featuring orphaned teenage girl protagonists proliferate. They fill their own shelves in bookstores, and their adaptations feed film studios and crowd streaming services. The genre is crowded, but outside its territory of chosen white girls and romantic triangles, there’s open country.

Agnes Gomillion’s The Record Keeper sets out through that country. Arika Cobane is a student “Record Keeper” in Kongo, one of three territories to survive a catastrophic war. The land has been devastated far beyond the usual: the landscape itself has been destroyed by bombs that shattered tectonic plates and left only fragments of the old world habitable and arable. Kongo occupies the most productive territory. Its population’s task is food production.

The racial division is clear, though most of its articulation is indirect. The Record Keepers, like all Kongo people, are black. Yet, the (white) “English” would like them to know, each Record Keeper is also special: “The first has a narrow nose and ample intellect . . . . His hair grows in the thick bush fashion and his mouth is finely drawn.” The Record Keepers’ sacred duty is to “manage the Second Brothers of your race—the workers. See to it that they know their place is in the field.”

While the racial politics may seem overt, they reveal the complexities of slavery as both a historical and a potentially recurring phenomenon. A ruling elite (embodied by white Teachers) establish a hierarchy of the enslaved, all the while creating an intellectual framework that apparently justifies everyone’s suffering. The system is ostensibly temporary, geared for human survival. All suffer, just in different ways. If the system is racially unjust, this is only a temporary measure, and the Kongo have the gratitude of all other nations.

The propaganda is subtle and effective. More crucially, protagonist Arika has no special knowledge of her world. Her teachers may be brutal, but she has known no one else. Her early rebellion was beaten out of her, and now she is the best-behaved, most orderly of children. All her instincts are geared toward self-preservation. The “mean girls” of her class distrust her, and rightly: Arika reports to the Teachers. Her singular goal is to graduate first in her class, become a Senator, and escape forever the threat of being reclassified for field work.

The Record Keeper is a lesson in the politics of oppression. The oppressors are invisible and distant. It’s much easier to turn on those near you or below you, to betray and punish to save yourself from the apparently unlimited suffering that the powerful can inflict. At the same time, the dangled promise of validation shines for those among the oppressed who “excel” by meeting their oppressors’ requirements and accepting their oppressors’ version of reality.

Arika’s gradual discovery of the forces shaping her world is unheroic. She finds herself the most ignorant and the least savvy of her peers. In her quest to excel, she has too easily accepted the lessons taught by the Teachers and failed to recognize the other forces at work. She is not the shining heroine, but the worst collaborator.

If The Record Keeper has a flaw, it’s that the book gives so much energy to carefully building and revealing its world that the plot’s movement toward revolution comes late and feels rushed. Gomillion’s characters are complex and detailed, and her devastated landscape invites careful exploration. The swirl to climax is irresistible, yet faintly disappointing. The promise it leaves, though, is the obvious potential for a sequel. (Given the current patterns of publishing, one might reasonably suspect a trilogy.) If this is the case, Gomillion’s first novel will likely settle as part of a larger, magnificently realized whole.

Early comments draw connections between Gomillion’s writing and that of Octavia E. Butler. The comparison is far from spurious: Gomillion writes with the elegance and insight that pervades Butler’s work. Arika Cobane is as engaging, flawed, and fully human as Dana Franklin of Kindred or Lauren Olamina of Butler’s Parable novels. Given that Butler’s work remains unfinished, its author gone too soon, Agnes Gomillion’s arrival feels like deliverance. Here is a writer whose work will survive genre fads and shifting cultural attention to reveal persistent, crucial truths.