The Reckoning: Our Nation's Trauma and Finding a Way to Heal 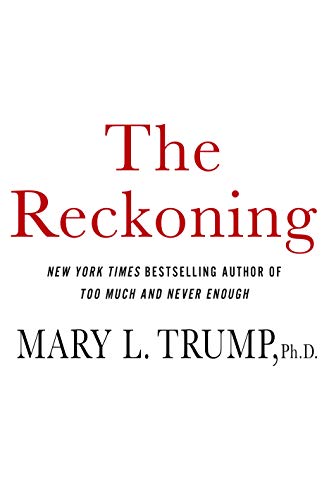 “For this country to heal from its inarguably traumatic past, it is crucial to experience its pain: to feel anguish, sadness, and rage along with facing a recognition of being complicit in (perhaps unwittingly) traumatizing others by looking the other way.”

In the same way that a therapist explores and attempts to understand the roots of trauma in a suffering patient, psychologist Mary L. Trump traces this country’s current social and political ills back in time to the litany and legacy of the painful events that spawned them. Herself a survivor of Complex Post-Traumatic Stress Disorder, Dr. Trump knows all too well what it is like to live in the wake of failing “to recognize that we are being traumatized while we are traumatized.” She has also written about trauma as the niece of former President Donald J. Trump, in her book, Too Much and Never Enough: How My Family Created the World’s Most Dangerous Man.

The Reckoning examines today’s political hostility and socially aggressive culture and insists that if we are ever to come together and heal our divisiveness of literally seeing things in “black” and “white,” we must pause and reflect on how our nation devolved to its current polarized state. Such a reckoning starts with each of us taking an unflinching look backward at this nation’s traumatic history in order to determine what we can do to begin to make things right in the present and to forge a democratic society for all.

The book is divided into four parts: the original traumatic events that cleaved our country in two, including the Civil War and Reconstruction; the recent and current events including the presidency of Donald Trump and the COVID pandemic that breathed fire into the bitter rift between “them” and “us”; how our legal, political, educational, governmental, financial and social institutions overtly and covertly fostered and still foster unfairness and racial injustice; and how former President Trump’s administration led to the seditious act of storming the US Capitol on January 6, 2021.

Dr. Trump begins with an explanation of how, though trauma can arise from “dramatic, violent, singular events,” it also can build up stealthily over time as healthy norms are purposefully slowly and gradually perverted. As a psychologist, Mary Trump recognizes how our hard-wired preference for emotional comfort often makes us recoil from revisiting the horrors of the past, both in our personal lives and on a national scale. Her goal is to unearth and help us face the painful truths of our country’s most undemocratic history as well as the more painful reality that too many of today’s institutional practices are still re-enacting and reinforcing the traumas of yesterday.

She believes and hopes that we are capable of letting go of our sanitized view of our history, beginning with slavery and, instead, face it squarely to learn how to make amends. She explains that “Ours is an ugly history full of depraved, barbaric, and inhuman behavior carried out by everyday people and encouraged or at least condoned by leaders at the highest level of government. A denial of that history is a denial of our trauma.”

Her descriptions of what the South was fighting the North for during the Civil War—white Christian power and supremacy—and of the token post-war efforts to provide Black people with true equality is chilling. Her passages about how those in power used any means possible to keep that power—blaming the victim for incurred harm, manipulating truth with lies, and employing deadly force when falsehoods failed to win the day—are painful to read.

Dr. Trump takes us through presidencies from the Civil War up to the present day in which action could have been taken to correct historical wrongs but, instead, past transgressions were glossed over, and impunity was granted so that those in power need not dirty their hands. She helps us understand that these actions are no different than a mother being told that her husband had been abusing their children but denying the facts and not holding him accountable.

Her point is that not only individuals suffer trauma, but that entire populations may experience multigenerational trauma, as is the case with slavery and its oppressive aftermath. As the author knows, people cannot heal while being traumatized. Nor can they heal when the truth is not validated, an injury which only further traumatizes them.

Although the author’s “Uncle Donald” is far from the only perpetrator of national trauma called to task, he stands as a good example. Describing his inaction and intentional, hurtful actions during the COVID pandemic, she points out that his “behavior functionally lacked empathy and stemmed from his fear of being associated with weakness.” He is no different than slave owners and traders, whites who made money appropriating Black land during Reconstruction, and those who since then have built empires upon the broken backs of the disenfranchised and disempowered. Such abusers exhibit a similarly smug indifference to the plight of others and are interested only in succeeding and winning by stepping on or over those who get in their way.

The author explains the effects of multigenerational trauma—from depression to the burden of carrying its deeply burrowed emotional pain with us throughout our lives. She reminds us that “forgetting makes us complicit with the trauma we’re trying to escape,” that ironically, the urge to cut loose from it only ensures that it will shadow us forever.

The author tackles the question of how to deal with white privilege and teaches us to recognize in what forms it exists. Her goal is not to make us feel guilty when she insists that life was stacked against Black people from the get-go: “The oppression was deliberate, sustained, and multi-dimensional. Segregation was not a matter of [Black] preference, then or now.” When she describes, for example, housing practices such as redlining, which kept Black people from purchasing houses in white neighborhoods, she is showing us the truth and asking for recognition that this is how things were and too often, still continue to be. Her goal is neither to guilt trip nor shame us, but to enlighten us so that we may be armed with wisdom and motivated to right old wrongs.

Readers seeking a self-help guide for facing and overcoming this nation’s traumatic history will be disappointed in The Reckoning. Charting a path forward is not its goal. The clinician in Mary Trump is seeking only to help us stop squirming and sit still long enough to turn inward—and stay facing inward until we recognize and whole-heartedly feel the extent of the traumas we and our nation have experienced and caused, from slavery to the COVID pandemic to political parties careening toward fascism while denying doing so.

She is saying that for this country to heal from its inarguably traumatic past, it is crucial to experience its pain: to feel anguish, sadness, and rage along with facing a recognition of being complicit in (perhaps unwittingly) traumatizing others by looking the other way. Such reflection involves a heroic effort of empathy and compassion for self and other in order that we share the pain of those who have been traumatized and, by joining with them and following their lead, become a nation that moves past mere trauma survival into post-traumatic growth.