The Reckoning: A Novel 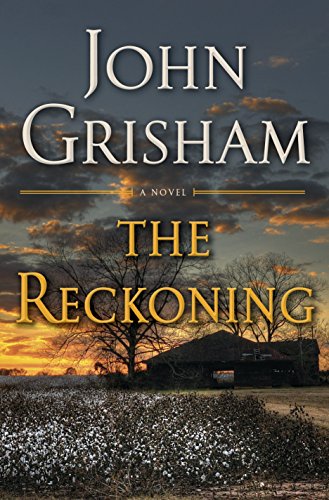 The Reckoning is John Grisham’s 40th book in a long and distinguished career that began with A Time to Kill (1989) and has included classic legal thrillers such as The Firm (1991), The Pelican Brief (1992), and The Runaway Jury (1996). At this point, one could argue that the author has earned the right to write about whatever he pleases. Certainly, his publisher is always happy to receive another Grisham title guaranteed to hit the bestseller list with a bang.

In this case, Grisham seems to have wanted to write two books. One, as he explains in his Author’s Note at the end of the novel, centers on the curious story of a prominent man in a small Mississippi town who murdered another prominent man and was executed after refusing to divulge his motive. This narrative hook, which he came across many years ago, now becomes the story of Pete Banning, who murders the Reverend Dexter Bell in Part One of the novel and goes to his death refusing to explain why he did it.

The other book on Grisham’s mind revolves around the Bataan Death March, the horrific forced movement of American and Filipino prisoners some 60 miles in the Philippines during World War II. After extensive research on the subject, Grisham projects Pete Banning back in time to his participation in this traumatic event. Part Two seems intended to explain Pete Banning the war hero, the survivor, the man of few words, while at the same time allowing Grisham to write about the treatment of prisoners by the Japanese during this horrible event.

After endless bouts of dysentery, starvation, and outrageous atrocities, Pete’s war story leads him back to Mississippi, where it ends. Part Three of the novel returns the reader to the legal consequences faced by his two children, Joel and Stella, in the aftermath of the murder committed by their father.

Always a master storyteller, Grisham’s plot lines fail to graft together into a cohesive thriller. The only suspense in the novel surrounds Pete Banning’s motive, and that hook can only be stretched so far. We know he did it, we know he’ll be tried for first-degree murder, and since his lawyer offers no defense, we know he’ll be executed. The only thing left is Why, and Why just won’t keep readers engaged through 400 very uneven pages.

With regard to the Bataan material, it’s not that Grisham isn’t allowed to write about things other than courtroom drama. Playing for Pizza (2007) is an example of a book in which he broke away from the legal thriller groove and wrote a story that was charming, engaging, and entertaining. It’s not that he has to write the same thing, every time out.

The problem with the Bataan section of the novel is that it’s too larded down with information cobbled from his reference sources, and it’s far too detailed in terms of physical suffering. It’s a fair bet that after endlessly recurring descriptions of diarrhea and beheadings, many readers won’t make it all the way to Part Three. The question of why Pete Banning shot the Reverend Dexter Bell is just not compelling enough to justify struggling through the middle portion of this book.

In The Reckoning, Grisham clearly has gotten something off his chest when it comes to the subject of the Bataan Death March. His attempt to coax his readers through it with a mashed-up legal storyline as the coating to an otherwise bitter pill, however, just doesn’t work. The novel doesn’t hang together well, and it certainly doesn’t entertain.