The Recipe: Classic Dishes for the Home Cook from the World’s Best Chefs 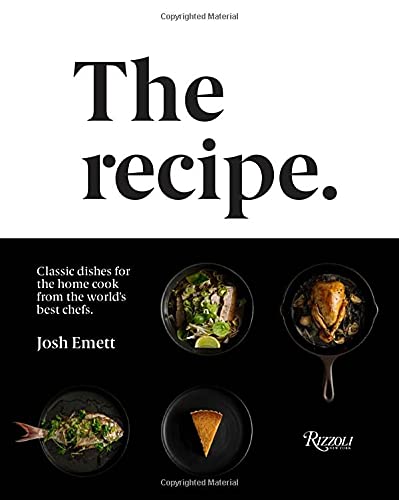 “It’s refreshing to thumb through a chef-written cookbook and recognize virtually all of the recipes . . . Think of a worldly grandma’s recipe box, and you’ll have a good idea of what’s inside.”

Internationally acclaimed New Zealand-based chef Josh Emett has identified over 300 iconic dishes from the past 50 years and convinced 150 of the world’s finest chefs to create recipes for them. The result is a beautifully photographed cookbook named The Recipe. This 500+-page collection is billed as a cooking primer and is unapologetically based on food popular in the 20th century. It can best be described as “global culinary nostalgia,” but who’s complaining? It’s refreshing to thumb through a chef-written cookbook and recognize virtually all of the recipes.

The list of writers contributing to The Recipe is impressive. Chefs and cooks include regional stars, such as Australia’s Annie Smithers, Scotland’s Tom Kitchin, and New Zealand’s Sid Sahrawat. There are also plenty of household names, including Jacques Pépin, Nobu Matsuhisa, Lidia Bastianich, Daniel Boulud, and Gordon Ramsay, whom Emett notably worked with for 10 years.

Even though the dishes from these notable chefs take us back in time, don’t expect flowery life stories or food histories. Instead, be prepared to find nine chapters of no-frills, traditional recipes for soups, pastas, vegetables, seafood, poultry, meats, sweets, sauces, and stocks.

These are recipes that you will want to use, and they represent a wide swath of international tastes, from borsch to Ragù Bolognese to Roasted Rib of Beef with Yorkshire Pudding to guacamole. Think of a worldly grandma’s recipe box, and you’ll have a good idea of what’s inside.

With its plain, washable black-and-white cover, this “manual aimed at helping you, the home cook” was made to be dogeared and spilled on. Some basic recipes to start with might be Ken Hom’s delicate Wonton Soup, or maybe the timeless Waldorf Salad by Martha Stewart. Another fundamental is Yudhika Sujanani’s Layered Lamb Breyani, a mixed rice dish long popular on the Indian subcontinent. For a taste of time-honored Chinese comfort food, there’s Luke Nguyen’s version of fish congee.

Further publicized as “the ultimate cooking companion,” Emett’s compilation will be especially attractive to novices. Some recipes, such as Classic Beef Wellington and Game Terrine Glazed in Port Jelly are complex, but that’s the nature of those particular dishes. The majority, however, are simple.

This no-nonsense book also shuns quirky embellishments and impossible-to-find ingredients. Although the occasional recipe does call for a special mustard or wine, they’re easily substituted. Many recipes require only a few ingredients, and the instructions are meticulous, leaving little room for guesswork.

Keeping with the theme of simplicity, most of this cookbook’s recipes have straightforward, easily recognizable titles, such as Lasagne, Scrambled Eggs, Fishcakes, Perfect Roast Turkey, Spicy Chicken with Peanuts, and Bagels and Bakewell Tart. Titles are all in English, but when appropriate, they’re also written in the language of the country of origin.

Most recipes are extremely close replicas of the original creation. Leah Chase’s Creole Gumbo, for example, is a splendid illustration of the hefty meat and seafood roux-based soup that’s been served in her area of New Orleans for centuries.

Some chefs do, however, modernize or take poetic license. For instance, Rachel Khoo’s striking version of a puff pastry king cake is filled with hazelnut cream and it’s topped with a swirl of apple slices. That differs greatly from the almond-filled, pastry-topped galette des rois of France, which is the original king cake. And it’s certainly nothing like the brightly colored doughy king cake of south Louisiana, which is the most popular version in the U.S. A short sentence or two addressing these variations might have been appropriate.

Regardless of any chef’s vision, it is evident from their stunning dishes that all contributors are tops in their profession. The food in their restaurants might be avant-garde, but the perfected classic recipes they’ve contributed to this cookbook prove they’ve earned the right to experiment. Serious home cooks would do well to read The Recipe and attempt to master what this collection of authors teaches.