Rebels at the Bar: The Fascinating, Forgotten Stories of America's First Women Lawyers 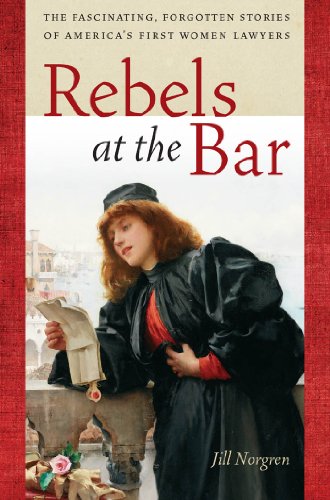 “Know a woman graduating from law school? Give her a copy of this book.”

Reading Ms. Norgren’s book reminded me that for all our advances, women remain a minority in so many areas where lawyers practice. At least women are no longer being denied admission to the bar.

Pioneers? Hardly. Rebels? Absolutely. How dare they believe they had the intellectual ability or the intestinal fortitude to withstand the rigors of the courtroom or the regime of legal studies?

They were feminists without adopting the label. They pursued their goals at a time when women were believed to be mentally and physically inferior.

The reasons given for refusing women admission to the bar were based on stereotypes, prejudice, and religion.

Norgren addresses this attitude, “[W]omen’s struggle to redefine the concept of equality confronted traditional Christian ideals concerning women’s and men’s roles. For many Christians, submissiveness, silence, and the hearth defined the ideal of woman’s behavior and place.”

Ms. Norgren’s book is more than a biography of women legal pioneers. It is also a history of the legal profession in the United States.

The patriarchal attitudes that permeated American society in the 19th and 20th centuries continue to exist.

Merriam-Webster defines “rebels” as those who oppose or take up arms against a government or ruler. They are rebellious and disobedient. They do not know their place. Yet those who rebel often redefine the norm and enlarge the opportunities for others.

The rebels in Ms. Norgren’s book did take up arms. They were disobedient. One judge, Edward Ryan, referred to their efforts as “a sweeping revolution of social order.”

Ms. Norgren is an academic but there is nothing dry about this book. She makes you want to read more. The women portrayed in her book are experienced successes and defeats. But, even in defeat, they refused to concede. They continued the fight because their goal was righteous.

In 1885 Katherine Stoneman sought admission to the New York state bar. The New York State Supreme Court denied her application because “there was no call for women lawyers in New York State.” Stoneman’s application worried the justices because, “liberality on the subject of woman lawyers would lead to even stronger demands for woman suffrage.”

Stoneman would not be denied. She changed the law. On May 20, 1886, Katherine Stoneman became the first woman admitted to the New York state bar.

Chief Justice Horace Gray stated “A woman is not, by virtue of her citizenship, vested by the Constitution of the United States, or by the Constitution of the Commonwealth, with any absolute right, independent of legislation, to take part in the government either as a voter or as an officer, or to be admitted to practice as an attorney. No inference of an intention of the Legislature to include women in the statutes concerning the admission of attorneys can be drawn from the mere omission of the word ‘male’.”

Lelia Robinson took the matter to the Legislature. In June 1881, Lelia J. Robinson became the first woman admitted to the Massachusetts state bar.

Clara Foltz was the first woman admitted to practice law in California—again after petitioning the state legislature. She is the pioneering voice behind the public defender concept. She raised the issue in 1893—70 years before Gideon. In 1913, Los Angeles established the first office of public defender—through the efforts of Clara Foltz and the votes of women.

While Susan B. Anthony and Elizabeth Cady Stanton were fighting for women’s voting rights, these legal rebels were seeking their own right to practice law. Sometimes the efforts coincided—but not always.

Admission to the bar was not the only issue occupying women. Another that continues today involved the question: What do we wear?

In 1876, the question involved hats. Belva Lockwood always removed her hat in court. Myra Bradwell, that etiquette deemed it inappropriate to remove one’s hat in public. In 1889, Chicago lawyer Margaret Wilcox ended the debate, “I maintain it is the inalienable right of each lady to follow ‘her own sweet will.’ Her keen intuition will guide her aright.”

Today, the question is pants or skirts? In the 1970s a Boston lawyer dressed all in red—in a skirt—lest a jury find her too masculine.

The 1900 census identified 1,000 female lawyers. Only 20 of them were admitted to practice before the United States Supreme Court. Most law schools did not admit women. Harvard, for example, did not admit women until 1950. Now one of that law school’s graduates and a former Dean, Elena Kagan, sits on the nation’s highest court.

By 2011, women made up 47.3% of those graduating from law school. With more than 1.2 million lawyers in the United States, women comprise approximately 31% of that total. Advances have been made, but there remains much to do.

Know a woman graduating from law school? Give her a copy of this book. Let her know who led the way and gave her the opportunity to follow her dream.