Rebbe: The Life and Teachings of Menachem M. Schneerson, the Most Influential Rabbi in Modern History 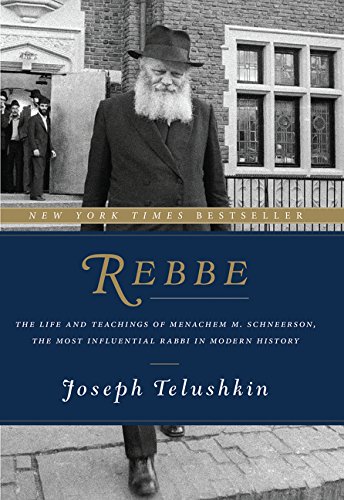 “Telushkin’s book brings the great man alive and gives the reader powerful motivation to examine his or her own life and ask what obstacles need to be faced. In his lifetime, the Rebbe touched the lives of millions; through Telushkin’s book, he will touch the lives of many more.”

Joseph Telushkin’s Rebbe is that extremely rare thing: a perfect book about a perfect man.

The late Lubavitcher Rebbe, Menachem Mendel Schneerson, was, by many reckonings, the most influential Jew since Maimonides. The Rebbe was the spiritual leader of the Lubavitch or Chabad sect of Chasidic Jews, a group comprising no more than 40,000 people worldwide. But his influence extended to practically every individual in the modern Jewish world.

Chabad is the primary orthodox sect that views “in-reach” or proselytizing to fellow Jews as its raison d’etre. To that end, the Rebbe instituted an approach to missionary work that has ultimately placed approximately 4,000 Chabad married couples in every corner of the globe, from Ankara to Anchorage, from Tahiti to Timbuktu.

The Rebbe’s emissaries, called shluchim, or messengers, till the rocky spiritual soil wherever they’re placed and build synagogues, schools, adult education programs, senior centers, ritual baths, and whatever else is needed.  The young couples going out from Chabad’s headquarters in Crown Heights, deep in the heart of Brooklyn, set up camp in a city or town where there may be no Jewish institutions, or outright hostility toward Chabad and its approach to proselytizing fellow Jews.  As a result, there’s practically no place on earth where you can go and fail to find a Chabad outpost.

The Rebbe ascended to leadership of the Chabad world in 1951, a year after the passing of the previous Rebbe, his father-in-law; Chabad, like most Chasidic groups, is dynastic in its approach to leadership.

How powerful is Chabad? At Chanukah, they light menorahs in public spaces across the world, including on the White House lawn. They essentially control Jewish education and life in the former Soviet Union. And they provide religious services, kosher meals, and day camps across the planet. They’re in six cities in Thailand alone, for goodness sake.

Why do they do this? The Rebbe believed that the more Jews who were brought close to their faith, the more imminent the arrival of the Jewish messiah. Everything he did, including staying up all night, night after night, year after year, to receive visitors of every possible background, was to facilitate the world’s ultimate redemption and the arrival of the messiah.

Chabad houses dot college campuses worldwide, offering college students an opportunity to explore and question their heritage. Those were all inspired by the Rebbe. Hillel Houses sprung up on campuses as a reaction to Chabad, so if you or your college kid ever took a meal, attended a service, or even went to a movie at a campus Hillel, you can actually thank the Rebbe for that as well.

Telushkin tells in loving detail the story of the Rebbe’s ascension to his position as Chabad’s spiritual leader and catalogs almost exhaustively the experiences of hundreds of individuals whose lives were touched personally and directly by the Rebbe. One of the least likely is Shirley Chisholm, an African-American congresswoman elected from Brooklyn in the 1970s and placed, ludicrously, by her racially biased House colleagues, on the agriculture committee.

The Rebbe reached out to her and suggested that she use her seemingly undesirable position to influence food policy for the poor. Chisholm took his advice and went on to create the WIC, or Women, Infants and Children program, which provides government-sponsored vegetables and healthy food for eight million Americans every year.

Within the Jewish world, the Rebbe was legendary for his sage advice. Telushkin recounts the story of Rabbi Adin Steinsaltz, one of the greatest thinkers in Jewish history, who as a young adult translated the entire Babylonian Talmud—thousands of pages—from a mixture of Aramaic and Talmudic “secret code” into modern Hebrew, a Herculean undertaking. Steinsaltz told the Rebbe that he was considering three projects, but wasn’t sure which one to take on, due to time restrictions. The Rebbe’s advice: Do all three and add more on top of that.

The Rebbe combined an enormous love of his fellow Jew with the guile of an individual born in anti-Semitic, Tsarist Russia, who could always find a way to overcome seemingly impossible obstacles. Telushkin quotes the chief rabbi of Great Britain, Jonathan Sacks, as saying that while other leaders created followers, the Rebbe created leaders.

Telushkin’s book appears almost twenty years after the passing of the Rebbe. Chabad, for reasons known best to itself, has never sought to replace him. Instead, the Rebbe, through hundreds of thousands of pages of commentaries and discourse on various Jewish topics, as well as seemingly endless amounts of videos, more of which are released every year, still inspires his troops around the world to stay optimistic and cheerful, overcome obstacles, and make the world a better place.

Telushkin’s book brings the great man alive and gives the reader powerful motivation to examine his or her own life and ask what obstacles need to be faced. In his lifetime, the Rebbe touched the lives of millions; through Telushkin’s book, he will touch the lives of many more.